PIANO DI SORRENTO. PRESENTATION OF “DANCE THE LOVE - A STAR IN VICO EQUENSE” BY RAFFAELE LAURO IN THE TOWN HALL ON FRIDAY, 7TH OCTOBER AT 6PM. BOOK REVIEW BY LITERARY CRITIC, CESARE AZAN 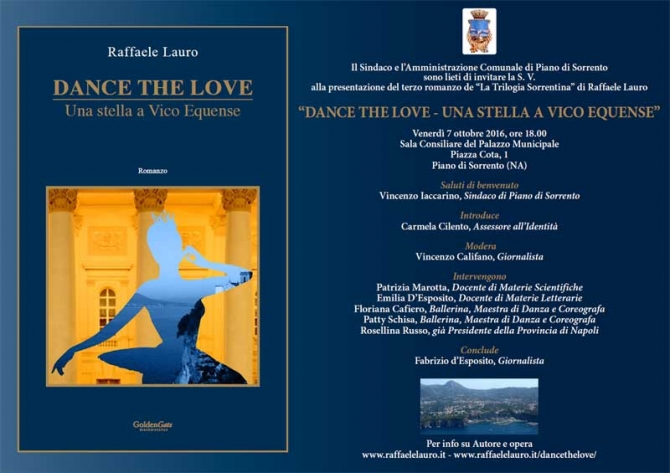 After the emotional première in Vico Equense on 27th July within the Social World Film Festival 2016 and the enthusiastic events in San Martino Valle Caudina on 25th August, in Sant’Agata sui Due Golfi on 28th August and in Sorrento on 10th September, the third novel, which closes “The Sorrentine Trilogy” by Raffaele Lauro, “Dance The Love - A Star in Vico Equense”, dedicated to the great Russian dancer, Violetta Prokhorova Elvin, will be presented on the initiative of the Municipal Administration of Piano di Sorrento on Friday, 7th October 2016 at 6pm in the Town Hall Council Chamber in 1 Piazza Cota. Vincenzo Iaccarino, the Mayor of Piano di Sorrento, will welcome the guests. The event will be introduced by Carmela Cilento, the Councillor for Culture. The debate will be hosted by journalist Vincenzo Califano. Among the female speakers: Patrizia Marotta, Professor of Scientific Subjects, Emilia D’Esposito, Professor of Literary Subjects, Floriana Cafiero and Patty Schisa, ballerinas, dance teachers and choreographers, and Rosellina Russo, former President of the Province of Naples. The event will be concluded by journalist and essayist Fabrizio d’Esposito. Literary critic Cesare Azan said this about the novel: “The true nature of this work is a novel-essay, because many common threads run through it and characterise it. First of all, the political thought is very much alive in the author in support of the position of Violetta, a deep hatred of totalitarianism, dictatorships, and politics based on violence. The other thread that runs through the work with a significant presence is the love of art, which unfolds through three roads: the great love for ballet and, then, for music. Violetta loved in particular Tchaikovsky, knew Shostakovich, and had regard for Rachmaninoff. The third element is that of painting. There is this deep, visceral love, with significant and precise descriptions of the Italian Renaissance and Florence. To demonstrate the didactic system of the work the last hundred pages of the book include a precious index on the history of ballet, a mini encyclopaedia of dance.” The complete Sorrentine trilogy, as announced previously by Lauro, will be published in 2017 in English, in a pocket format for the foreign visitors of the Sorrentine Peninsula.