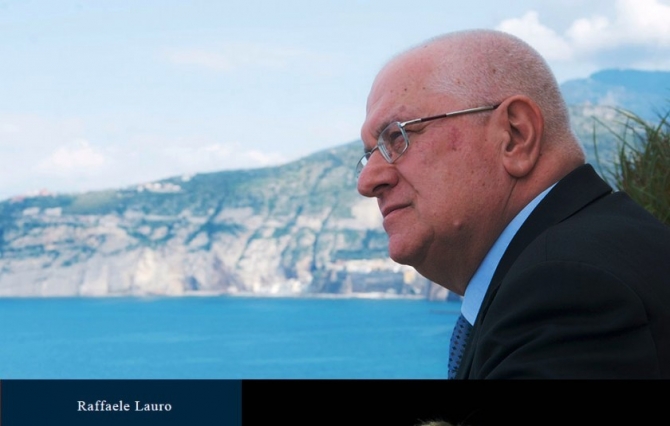 We are releasing an excerpt from an interview with Italian senator Raffaele Lauro, with a special focus on issues related to the future of the Italian national and local tourist industries, a key linchpin for the country’s economy.

The interview covers various aspects of the Italian political and economic situation, the pandemic’s impact on several economic sectors and the social factors that have changed people’s behaviors and habits.

… Planning and future projections will win. This will be true for all economic sectors, starting from tourism.

Senator, tourism is struggling everywhere due to the pandemic. In Sorrento and its surroundings, tourism accounts for most of the local economy. What does the coast’s segment need in order to be ready to start again? A reflection on the tourism of the future. Mass tourism is expected to end in Sorrento and elsewhere after the Covid emergency. What’s your view on this?

Once again, the Italian tourism – praised as the flagship of the country’s economy for its contribution to the national GDP, its art of hospitality, its employment level and its food and wine premium tradition, exported all over the world – has been betrayed by this government, just like other segments previously. Treated as a Cinderella, not considered as a priority at the Ministry, while the Italian regions have gone on acting on their own account. None of the suggestions made by the national and regional representatives, as well as by Unimpresa, have been agreed to. Except for insignificant, ineffective and unrealizable initiatives, in the emergency economic decrees, in the financial measures and – what is most serious and disturbing – in the Recovery Fund plan alike. Incomprehensible, malicious, irresponsible. This government writes laws that are not just convoluted, but also leave reality aside, because it is not listening to the industry professionals, starting from hotel managers, restaurateurs and all satellite activities. The Italian tourism is regularly overlooked, underrated, and again, cowardly betrayed. For what concerns the Italian and international tourist market, as soon as mass vaccinations will create medically safe conditions, in transportations too, and the middle class will regain trust in the future, the sector will recover, and will actually explode. Humankind’s calling to travel to cherish the beauties of nature, art and culture, and to discover different worlds and traditions, will never be smothered. Mass tourism will not disappear; on the contrary, it will grow, but it will be different than before – tourists will be most careful with medical safety and highly demanding in terms of sustainability, environmental protection and respect of nature. An eco-friendly mass tourism, totally refreshed within a circular economy. The winners will have equipped themselves, and will offer solutions in this direction both in marketing and structural terms, through green-oriented media campaigns. This will mostly concern local authorities, which will have to take district-wise measures, adjust their accommodation and catering offers, guarantee the protection of the environment and recycle their wastes. A green revolution is needed, and it should start from tourist districts, which can no longer rely on the Italian national and regional governments. The Sorrento and Amalfi district, including islands in the Gulf of Naples, whose economy mainly relies on tourism, is the ideal place for an early start of this revolution.

Since the first lockdown, mayors in the Sorrento peninsula have taken on the habit to take common decisions and give the same orders for all issues concerning the whole district. Years ago, you suggested that a union of the district’s municipalities could be a viable solution, but were unfortunately not heard. In your opinion, are there the conditions to reconsider your proposal? A measure to be adopted immediately, hinting at the administration led by mayor Massimo Coppola.

A union of the municipalities of the Sorrento coast! It is another battle of mine, dating back to my two mandates in the Sorrento municipality’s council since 1975, first in the opposition, then in the city’s government as a deputy mayor, also responsible for culture. You are taking me back to decades ago! Almost half a century ago! A battle that I lost back then for trivial rivalries, personalisms and administrative nearsightedness. Our district has a common calling and fate, common problems, solutions that must necessarily be shared and coordinated. Just think of the mobility, the traffic, the environment, the marine pollution and essential services. A union is still a viable solution that, while respecting every municipality’s independence, would allow them to share energies, resources and integrated solutions. Even as a member of the Italian parliament, I have kept suggesting this solution. The pandemic has shown that this could be the path to follow in order to reinforce the healthcare services and to plan a comprehensive project for the tourist economy to recover. A project to be outlined as soon as possible by a multi-municipality committee, coordinated by the local governments, with representatives of employers and trade unions alongside economy and communication specialists, in order to assess and suggest the pre-epidemic conditions of the sector, including both the Italian and international demand flows; the damage caused to the concerned sectors by the pandemic; the international demand flows to restore, all while considering the difficulties caused by new events, such as Brexit for the British market; the opportunities to turn to different markets, more attentive to transforming their offer with sustainability and environmental compatibility in mind; consequently, the need to plan prompt media campaigns as soon as the emergency is over. We need to prepare today for our tomorrow, or we will lose demand shares that we will not be able to bring back. This is what I would like to suggest to all mayors in the Sorrento area, first of all to Massimo Coppola. It is also necessary to create a new offer to match the deseasonalization of tourist flows. I am thinking of those ideas and suggestions that emerged during the recent electoral campaign for Sorrento’s mayor, which also date back to nearly half a century ago and deserve to be further explored and planned, as they can use specific European funds. It is about creating something “new” while trying to retrieve the “old” that can be retrieved,  provided that the two can coexist.

What do you mean by “new”, senator?

In the history of humankind, and particularly the history of economy, a monumental crisis like the one we are now living has caused the destruction of much of what was “old”, both tangibly and intellectually, and has created something “new”, although this revolutionary process of change has also determined remarkable sacrifices in terms of resources, a radical change of mindset, a bitter forsaking of all prestige incomes, previously and deceptively considered as acquired for good, and has last required a number of qualities like courage, determination, creativity, and why not, a visionary approach. Within Italy’s economic system, the country’s tourism is no exception, and has been severely affected by the undergoing economic and social crisis, as mentioned before. Tourism will have to reinvent itself from scratch, relying on its long-standing culture of welcoming, the sophisticated art of hospitality, an accommodation and service offering of prime quality, an excellent food and wine tradition, and a heritage of cultural and natural assets, including museums and archaeological sites, that are unique in the world. Such a revival invests first in places whose economies mainly rely on tourism, like Sorrento, its peninsula and the Amalfi coast. Among all deseasonalization initiatives, this is about identifying an extremely ambitious project to be financed with European funds, and to be completed within a decade, from 2020 to 2030 – turning the district, in the six months from October to March, to a “high education area”, in collaboration with some of the most prestigious universities in Europe (in the first five years, from 2020 to 2025) and in the world (in the next five years, from 2025 to 2030). Every five-year part of the project would be carried out through progressive modules, according to the agreements reached and signed by our continent and the world’s most prestigious universities. The area would become not just a university city, which we already have too many of, but the place of high post-graduate studies, with two back-to-back three-month terms to be devoted to internships: October to December and January to March. Internships would be directed and coordinated by the universities of origin themselves, with their professors and materials, totally independent on an academic level in the specific subjects and disciplines related to their post-graduate specializations. The Sorrento and Amalfi area would offer premium free-of-charge logistics, and dedicated facilities where to hold post-graduate training, equipped with state-of-the-art IT technologies; within the whole project, it could take care of organizing, assisting and supporting the offer of accommodation facilities for managers, professors and students, as well as their visiting families, with packages at subsidized prices. Such packages could include organized guided weekend tours of the region’s most famous sites, like historical palaces and museums (the Royal Palaces of Naples and Caserta, the Archaeological Museum of Naples, the art galleries), theaters (the San Carlo theater and more), archaeological sites (Pompei and Ercolano), other famous tourist attractions (Capri, Positano and Amalfi) and all local production facilities.

Once the project is defined on an organizational, logistic and financial level, after obtaining the first tranche of funds to start building the logistic facilities, collaborations and agreements could be proposed – through the most advanced communication and marketing tools – to the academic institutions of the most exclusive European university cities in the first five years: Utrecht, Oxford, Manchester, Grenoble, Graz, Edinburgh, Dublin, Coimbra, Salamanca, Lund, Valencia and Zurich. Based on the results from this first period, the Sorrento and Amalfi district could then prepare to welcome managers, professors and post-graduate students from the most prestigious American, Japanese, Russian and Chinese universities. In this way, our region could confirm its reputation as the land of welcoming, beauty, culture and international collaboration. The goal of the first five years would be hosting thousands of graduates for every internship, while the next five years would aim to double the participants in each internship. The definition of this project should involve all players of tourism in the Sorrento and Amalfi area, voiced by their trade associations and trade union representatives and coordinated by the local administrations: hotel managers and workers, restaurateurs, tour guides, transportation workers, traders, artisans, cultural associations, entertainment facilities and many others. This way, all local tourism activities could gain solid, long-term benefits in terms of production and income; a potential high-profile catchment area could be reinforced and expanded; and the international image of our region could be promoted as a privileged place where to stay, enjoy culture and cultivate international relationships. This could be a valuable tool, though not the only one, to relaunch our tourism economy in the next thirty years.