"CARUSO THE SONG" BY RAFFAELE LAURO: THE INNER BIOGRAPHY OF LUCIO DALLA THROUGH HIS MASTERPIECE AND HIS RELATIONSHIP WITH SORRENTO 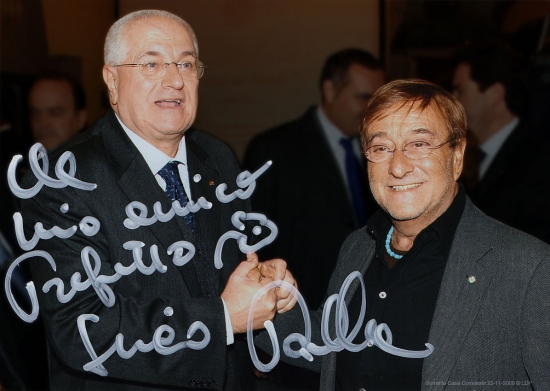 We have interviewed Raffaele Lauro on his new work, which is in the course of writing. It is dedicated to the sentimental relationship of Lucio Dalla with the city of Sorrento, a connection that has found fulfilment in his masterpiece, the song of "Caruso", now known and celebrated throughout the world, which has become an ace in the hole for singers and famous tenors. The work represents a new tribute, which Lauro wants to pay to his city and, at the same time, to the great artist, who now passed away. We publish it today, on the day of the seventieth birthday of the prolific writer from Sorrento (Raffaele Lauro was born in Sorrento, in the great Sorrento, on 10 February 1944). He has only just returned from a tour of presentations of his historical novel "Sorrento The Romance" in South America, and now continues with the national tour of events starting from the Sorrentine Peninsula: on 21st February in Piano di Sorrento and on 1st March 1 at S.Agnello, under the aegis of the respective municipal authorities.

First of all, congratulations for the achievement of the age of seventy, in good health and in full swing! Many of your friends and fellow citizens are amazed at your hyperactivity.

Nothing to brag about. I know many eighty-year-olds, who fly above my head. I quote, for example, Vincenzo Scotti and the worker-entrepreneur Ricccardo Ruggeri, who last night on television has shown remarkable lucidity and admirable and proactive approach towards the Italian crisis. He said: cut down on the high end of the Italian bureaucracy and you will save the country. He understands everything! The secret is to work, both physically and intellectually. I follow the example of my parents and my grandmothers. My mother, at the age of 92, followed the political debate, football and boxing as if she was a young girl. You have to give the best of yourself, to the end, as soon as good health does not abandon you. The idea of retirement as inactivity causes me hives. I refuse it.

How did the tour of "Sorrento The Romance" go in America?

Very well in the sense of an enthusiastic welcome everywhere, but they asked me to return with the Spanish version of the historical novel, which will be ready by 2014.

Are you proceeding with the writing of the novel on "Caruso", Sorrento and Lucio Dalla? Where the direct testimonies of the Sorrentine friends of Dalla useful in the process?

Out of the old project, which had been developed based on reading the fiction works on Enrico Caruso, Lucio Dalla and on the song "Caruso", only the title "Caruso The Song" remained. I decided to insert a caption "Lucio Dalla and Sorrento "and the quotation of the first verse of the song, as suggested brilliantly by Antonino Siniscalchi: Here, where the sea shines and the wind blows fiercely... As for the rest, the interviews, which I had collected in recent months, from friends and collaborators of Lucio, have convinced me to focus on a new and different, more real and more authentic key of the work! It is no longer a novel about Lucio Dalla, but the "inner biography" of Lucio Dalla. His "humanitas", his sensitivity as a man and as an artist, his ability to communicate with all and humanly bond with everyone. To listen and to "feel" the feelings of others, to receive them and make them his own! An extraordinary case!

It will be, therefore, a work more of poetry than prose?

It will be a poetic work, for its inspiration and content, starting with the events linked to places, people and affairs of our Sorrento, with the omnipresent sea. The result will be Lucio a poet, Lucio a man, Lucio a singer of nature, with his passions, his loves, his loneliness, his exaltations, his melancholy and his boyish wonder, in the face of human and natural beauty. And also his love for sport, as a physical activity.

In what way is Dalla's "interiority" intertwined with Sorrento?

The strong ties with our city mediate the bright highlights, such as the shadows of his soul and his artistic spirit, as seen in several episodes and as confirmed by the lyrics of his songs before and after the release "Caruso".

How will the work be structured then?

The work is structured into twelve chapters, which are inspired by real events, verified stories and reliable evidence, to transfuse and sublimate themselves in their compositions.

Could you give us one example as an exception?

There are two chapters headed: "Fauno Notte" and "La Scogliera." In the first venue, the physical and artistic onset between Lucio and Sorrento took place, along with the musical ensemble of Flippers in the sixties, and thanks to Franco and Peppino Jannuzzi. Amazing episode of summer flooding of the night club caused by a storm, with Lucio, who standing on a table in the chaos and confusion of the dark and in full emergency, stomps his feet, plays and sings the end of the world. Sublime!

"La Scogliera" is the beating heart of Marina Piccola, of the port. On the terrace of the bar-restaurant of Angelo Leonelli, a very close friend of Lucio, lights the light of the inspiration for the masterpiece "Caruso". Lucio was curious about everything, devouring any information, any news, any dialect, every joke he heard. He noted everything in a notebook with a black cover. Then, he macerated everything together within himself, at night or on marine horizons, and it produced a precious gem, a verse, a note, a melody. And so was it also with "Caruso".

And the sport? This fact is new?

Not at all. Lucio was very sporty, especially in marine disciplines. He loved scuba diving, but with limited success of prey. Not many people know too, that Lucio loved basketball, and he arranged with his friends of Marina Piccola a basket pitch on a little sandy beach behind the harbour for boats, below the Excelsior Vittoria. After mooring his boat (the names of his boats are another epic, starting from "Catarrh"), he enjoyed playing, as small as he was, with the giant sailors of the port. Not at all intimidated by such height, as soon as he grabbed the ball he wanted to win, and Nino, a very tall young man from Sorrento (who unfortunately died prematurely) approached him, lifted him to the sky and allowed him to go to the basket among the applause and laughters of all present at the beach of Marina Piccola. Simple and tender moments of happiness, almost by magic, extolling his boyish soul.

When can we read "Caruso The Song"?

Not before autumn. The work of the first draft is easy. The definition of the text is more complex. I'll publish it also straight away in one volume, both Italian and English. I am sure that it will move all who knew and loved him, even if only through his songs. I hereby repay a debt of gratitude, which I assumed in the church of the Cape of Sorrento on the day of the celebration of the Mass in redemption to his premature death. In addition, on behalf of my city, to the extraordinary artist, a poet, a lyrical imp, who with "Caruso" resumed the fame of Sorrento in the World: a masterpiece song, an immortal melody, which picked up the baton of "Torna a Surriento" (Come back to Sorrento). Thank you, Lucio!