THE WEBSITE OF "SORRENTO THE ROMANCE" HAS BEEN LAUNCHED IN ITALIAN AND ENGLISH WWW.SORRENTOTHEROMANCE.COM 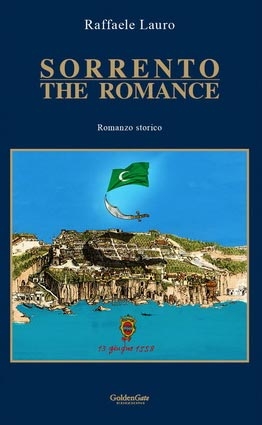 The website in Italian and English of the historical novel "Sorrento The Romance" by Raffaele Lauro, published by GoldenGate Edizioni, is from today available for visitors. The website enables the online purchase of the work in hard copy and in eBook format, both in Italian and in English, as well as all the other nine narrative works of the author published from 1987 until today, starting from "Roma a due piazze", which won the award of Premio Chianciano 1987 di Narrativa (Opera Prima). Starting from the Turkish assault of Massa Lubrense and Sorrento on 13 June 1558 the work narrates the tormented existential story of the Sorrentine Marino Correale, which develops in Sorrento, Naples, Istanbul, Venice and Madrid, through his conversion to Islam and, finally, his return to the Christian faith, emerging on the bloody backdrop of the sixteenth century devastated by religion wars and the conflict between Christianity and Islam. It invites to dialogue between the three great monotheistic religions (Judaism, Christianity and Islam), as called for by Pope Francis. The website is divided into interactive maps and an exceptional iconography, so as to provide the reader, the tourist or the student, not just with the narrative biography of the author and the novel plot by chapters, but also with a valuable cultural and tourist content: images of places, coats of arms of the characters, crops and foods of the sixteenth century, and the current tourist routes with monuments and places of the novel. A very interesting part of the website is the photographic and audio-video material, presented also in English, with all the public presentations of the work, starting with the one in the Senate on 21 November 2013, with integral presentations of the speakers, press releases of reviews, interviews with the author broadcast through local and national television networks (Rai Uno, Rai Due and Rai Tre), as well as news about the events of 2014 taking place in Italy and abroad. The reader of the novel has the ability to interact directly with the author on the content of the work via a dedicated email. The website designed by the author was created by webmaster Mauro Siniscalchi.