PIANO DI SORRENTO PAYS A TRIUMPHANT TRIBUTE TO DANCE. ENTHUSIASTIC RECEPTION OF THE NEW NOVEL BY RAFFAELE LAURO DURING A CROWDED EVENING OF THE HIGHEST CULTURAL PROFILE 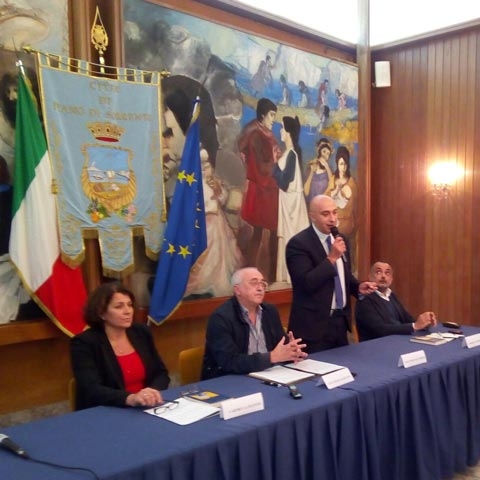 The mostly female public of Piano di Sorrento honoured with enthusiastic reception the third novel of “The Sorrentine Trilogy” by Raffaele Lauro, “Dance The Love - A Star n Vico Equense”, dedicated to a great Russian dancer, Violetta Elvin, born Prokhorova. The event was organised by the Municipal Administration of Piano di Sorrento in the Council Chamber of the Municipal Palace crowded to its limits. Mayor Vincenzo Iaccarino introduced the event by highlighting his personal friendship with Lauro and the bond of this man of institutions with Piano di Sorrento. In the introductory speech, the Councillor for Identity, Carmela Cilento, exalted the relationship between immanence and transcendence as a key to reading the novel. The panel discussion was masterfully moderated by journalist Vincenzo Califano, who offered to the very attentive public a reading of the historical critical review by Gian Luigi Rondi on the narrative work of Lauro. The three highly applauded speakers significantly contributed to the deep analysis of the new novel by the Sorrentine writer. Lecturer Patrizia Marotta explained the art of dance as the science of movement based on rigour and discipline, connecting the world of young people and school with the example of Violetta Elvin as a woman of courage, character and truth. Colleague Emilia D'Esposito analysed the novel from a threefold perspective, that of women, youth and men, exalting the figure of Fernando Savarese, who discreetly loved Violetta, not only in the splendour of her beauty, but always holding her hand all along their route together. There was a very exciting contribution of two stars of dance, who taught the love for the art of Terpsichore to young generations of the Sorrentine Peninsula: Floriana Cafiero recalled with the kindest expressions her first encounter with Violetta Elvin at the Teatro di San Carlo in Naples, calling it a mixture of delicacy and firmness; Patty Schisa thanked Lauro for having written a wonderful book about dance, an art that gives to women a classy imprinting and elegance. Finally, Rosellina Russo, the former President of the Province of Naples, pioneer and dean of female politicians in the Sorrentine Peninsula, compared Lauro to a winged Pegasus, which always excites the reader in his books, makes them rediscover the roots of the Sorrentine land, and raises a hymn to women. The conclusions frequntly interrupted by applause were drawn by the master of national journalism, Fabrizio d'Esposito, a native of Sorrento, who wanted to honour the event with his participation and his brilliant speech: “This novel offers us many life lessons: the first one is that of astonishment. In the Sorrentine Peninsula, on Mount Comune, Violetta decides that she would spend her lifer here. The second lesson is that of silence and style. Violetta, after her success, decides to live in sobriety and tranquillity, surrounded by people that are dear to her. The third lesson: how to live the present. The fourth lesson: in a world where one still wants to raise walls of separation, Violetta is a dialogue between different cultures and declares herself a citizen of the world. The main merit of Lauro’s trilogy: to strip the heritage of Sorrentinity from provincialism and have it conveyed internationally.” “I thank – the Author told the press at the end of the event – Mayor Vincenzo Iaccarino, Councillor Carmela Cilento, Vincenzo Califano, the brilliant speakers and, in particular, my friend Fabrizio d'Esposito, for creating a meeting of high cultural profile about my book, with refined critical analysis and suggestive personal testimonies, which truly honoured and moved me.” Among the numerous participants: Mayor and Deputy Mayor of Massa Lubrense, Lorenzo Balducelli and Giovanna Staiano, Councillor for Culture in Meta Biancamaria Balzano, entrepreneurs Michele Maresca and Paola Savarese, Bank Manager Gianni Iside, Dean Patrizia Fiorentino, journalist Antonino Siniscalchi, blogmaster Mauro Siniscalchi, Professor Marisa Cimmino, lecturer Salvatore Ferraro, Professor Antonio Volpe, Master Michele Maresca, Master Anna Imperato, Master Marco Gargiulo, Deputy Quaestor Maria Pia Briguori and Engineer Graziano Maresca. The next event concluding the presentation in the Sorrentine Peninsula will be held in Meta on Saturday, 5th November 2016.