VIOLETTA ELVIN, THANKS TO HER MAGNETIC PRESENCE, ENLIGHTENS WITH HER ROYAL GRACE AND REFINED SIMPLICITY THE PRESENTATION OF “DANCE THE LOVE - A STAR IN VICO EQUENSE” BY RAFFAELE LAURO AT THE TOWN HALL OF SORRENTO, CAUSING A TORNADO OF APLLAUSES AND UNREPEATABLE EMOTIONS 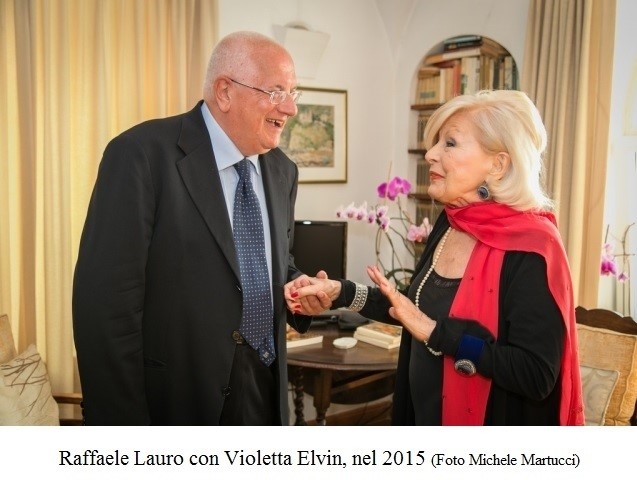 In front of the great and exceptional public on this grand occasion, which crowded to the fullest the Council Chamber of the Sorrento Town Hall, worm and merited expressions of appreciation were dedicated by Mayor Giuseppe Cuomo to the Russian dancer Violetta Elvin, born Prokhorova, who received the trophy awarded to the Sorrentine retired holders of offices. This event concluded the extraordinary and unrepeatable stage of presentations of the third novel of “The Sorrentine Trilogy” by Raffaele Lauro, “Dance The Love - A Star in Vico Equense”, after the events in Vico Equense, San Martino Valle Caudina and Sant’Agata sui Due Golfi. The protagonist of the work written by the Sorrentine writer, greeted at her triumphal entry by a tornado of applause and a standing ovation followed by the succession of the speakers, sat in the front row alongside the Deputy Mayor Raffaella Cancellieri, Commissioner Maria Teresa De Angelis and her old British admirer, Alex Bisset, mentioned in the novel, and thanked standing with regal grace and elegant simplicity of a ninety-three year old, the City Administration, the speakers and the author of the book dedicated to her. The event, conducted with the usual mastery by journalist Antonino Pane, a longtime friend of Lauro, who wanted to emphasize, among other things, the surprising and undisputed cultural vitality, which never ceases to amaze the observers, developed in a crescendo of emotions cleverly solicited by bright speeches very refined from the critical point of view, held by cultural operator Carlo Alfano (this book is a hymn to the art of dance and universal love, you breathe in the scent of our land and life), Professor Marisa Cimmino (Lauro’s stylistic refinement refers to Italo Calvino and the lightness of his writing to literary classics), hospitality entrepreneur Paola Savarese (reading Lauro helps us to rediscover with new eyes the hidden beauties of our land: the magic of Vico Equense triumphs in this book in particular) and President of the praiseworthy and very active association “Friends of the Correale Museum” Nadia Di Leva (Violetta Elvin, a universal citizen, is a high symbol of femininity and an example of courage for all of us women). In his reply, Lauro wanted to re-express, first of all, his gratitude to Mayor Cuomo and councillors Maria Teresa De Angelis and Mario Gargiulo, for their continued support, which he received in the course of four years dedicated to trilogy drafting, and to the brilliant speakers, for their sophisticated analysis of his work. Then he paid tribute to the magnetic personality of the protagonist brought up in discipline and rigour of the art of Terpsichore, and announced the publication of the Sorrentine trilogy in 2017, in English, in one volume in pocket format for use by tourists, lovers of Sorrento, concluding with a heartfelt invitation addressed to the present audience: “Whether you are religious or not, open your eyes to the beauty of the world and do not be overwhelmed by the ugliness served up daily by the media. For this reason my books are the story of the beauty of nature, art in all its expressions, love and life. My books celebrate, in particular, the human beauty that dwells in every person, regardless of sex, colour, race or political and religious creed. A beauty that beats in all of us, in a great artist as much as in a streetwalker, we just have to know how to read and love it. If you were to lose this value, the story of man would be at risk of extinction.” The large yard was attended also by the younger audience, such as Senator Teresa Armato, President of the “Francis Marion Crawford” Study and Research Centre, Antonino De Angelis, banker Giovanni Gargiulo, solicitors Angelo Armano, Salvatore Ravenna and Maurizio Altomare, arrived from Molfetta, engineers Antonio Pollio, Graziano Maresca and Francesco Saverio Fiodo, Anna Imperato, Claudia Scaramellino, hotellier Paola Iaccarino, Rosaria and Gianluigi Cioffi, Lucia Gargiulo, Torino Siniscalchi, Mauro Siniscalchi, Liana Le Serre, Rossella Di Leva, Deputy Prefect Mariolina Goglia, Professor Livia Cipriano, Giuseppe and Lucia Pane, blogger Massimiliano D’Esposito and photography teachers Giuseppe Coppola, Antonino Fattorusso and Michele De Angelis. The next event planned for 7th October at the Town Hall of Piano di Sorrento, organised on the initiative of Mayor Vincenzo Iaccarino, will be hosted and concluded by journalists Vincenzo Califano and Fabrizio d’Esposito from “Il Fatto Quotidiano”.
Galleria fotografica di Giuseppe Coppola
http://www.raffaelelauro.it/fotogallery/77/presentazione-di-dance-the-love-a-sorrento-10-09-2016.html
http://www.raffaelelauro.it/fotogallery/80/presentazione-di-dance-the-love-una-stella-a-vico-equense-di-raffaele-lauro-al-palazzo-municipale-di-sorrento.html