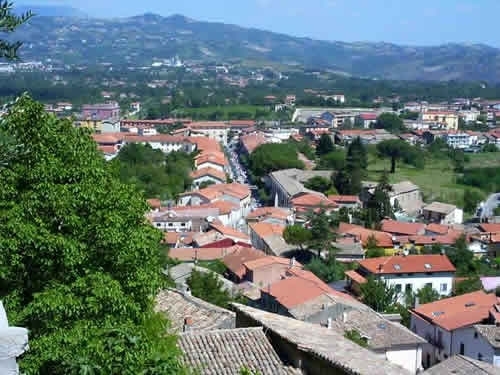 Good evening, everyone. I just wanted to welcome you all, who arrived here to join us to celebrate this great event: on 17th august 1986 Lucio Dalla sang “Caruso” in a worldwide première, in the Stage Area here in San Martino Valle Caudina. The Municipal Administration organised this important anniversary event with the intention to celebrate a great cultural moment which took place here in San Martino. Not coincidentally, this will be an event full of news and cultural initiatives announced by our guests, which we got to know in advance. It is clear, therefore, that I also thank everyone, who is taking part in this meeting. I want to welcome Professor Raffaele Lauro, a witness to Lucio Dalla on an international level. I want to thank the Deputy Chief of Police, Doctor Matteo Piantedosi, Doctor Golda Russo, Professor Cesare Azan, as well as Gianni Raviele. I feel obliged to thank also the guests present in the room: the Commissioner of Avellino, Luigi Botte, Dr. Giuseppina Marino of the Cervinara police, who has been of great help together with the commander of the police station, Marshal Pietro Lonardo, and, finally, the President of Città Caudina and Mayor of Airola, Michele Napoletano. As I said earlier, our Administration aims strongly to develop cultural initiatives. We have been gathering for only two months and, believe me, we have laid a foundation for important initiatives to be developed in the coming months and years ahead. We have organised a project linked with a Christmas event, aimed to promote Tourism by the Region of Campania, which for us is a very important opportunity not to be wasted. The idea is to make the Christmas “catuozzi” an event that is relevant at least at regional level. For us, culture means growth for a community and an affirmation of a community. Not surprisingly, we proposed another project to the Region: benefiting from the promotion of Cultural Assets, because we believe that the valuation of land resources will be the focus of the San Martino’s community, we intend to transform the Villino Del Balzo into a House of Culture to host there a number of initiatives that will be proposed tonight. For this reason we have decided to invite also the president of Città Caudina, because some of the initiatives will be sealed indeed by Città Caudina. Senator Lauro, I welcome you and I say see you soon, because we want to carry out all those initiatives on Lucio Dalla in such way to create occasions for growth and development of our community. Thank you!

Thank you, Mayor. Good evening, everyone. I am here for the second time in fifteen days and for the second time one speaks of culture. I am pleased, because talking of Città Caudina and Culture means determining added value to attribute to this valley. Fifteen days ago I expressed the idea of creating a Pro Loco of Città Caudina and shortly we will hold a meeting to finalise this proposal without eliminating the local Pro Locos. Having said that, I think that investing in culture is necessary. Mayor Pisano does a good thing promoting many initiatives of this kind. Città Caudina and the Mayors have to their disposal all the necessary resources to make it happen. Now the time has come to action and pursue. Dottor Raviele, I truly respect you, you have done one of the first interviews with me and I was very pleased, as I am happy to be here and to listen to the proposals that you want to suggest for Città Caudina. You have brought honour to this land and today your experience and your advice is something that we have to treasure. Mayor, I remain at your disposal for everything you want to create in terms of culture and beyond. Thank you for the invite and have a good evening, everyone.

Good evening, everyone! I also welcome everyone present at this event. I couldn't have imagined a better way to celebrate the thirtieth anniversary of the première performance of Lucio Dalla’s masterpiece, “Caruso”, in San Martino on 17th August 1986. Many remember that date as 19th August, but having carried out a detailed research, we have established that the exact date was 17th August. The Municipal Administration is to place a plate in the Stage Area to preserve that important event in the collective memory of the community of San Martino. What more special way to enrich this celebration, if not with the presence of Professor Lauro, one of the most important interpreters of the life and poetic of Lucio Dalla. Tonight we are going to present his book, which concludes “The Sorrentie Trilogy”, entitled “Dance The Love - A Star in Vico Equense”. It will be presented in two speeches, by Dr. and solicitor Golda Russo and Professor Cesare Azan. I give the floor straight away to Golda Russo. Thank you!

Gianni Raviele, former Chief of the Cultural Division of TG1