THE “LUCIO DALLA AND SORRENTO TOUR” CONCLUDES IN SORRENTO ON 29TH FEBRUARY 2016, ON THE FOURTH ANNIVERSARY OF THE PASSING OF THE GREAT ARTIST. THE PUBLICATION OF THE COVER AND THE INTRODUCTION OF THE THIRD BOOK BY RAFFAELE LAURO ON LUCIO DALLA 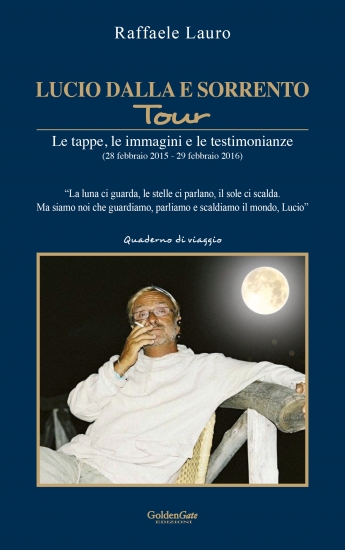 On Monday, 29th February 2016 in Sorrento, on the fourth anniversary of the passing of Lucio Dalla (1st March 2012/1st march 2016), the “Lucio Dalla and Sorrento Tour” held in 21 stages in Italy and abroad, initiated in Sorrento on 28th February 2015, will conclude. During the stages of the tour, 82 different speakers (politicians, diplomats, mayors, regional administrators, community leaders, journalists, professors, professionals, musicians, singers, DJs, students, literary critics, film critics, housewives, sailors, fishermen, restaurateurs, hoteliers, poets and many true friends of Lucio) presented the narrative and cinematographic works by Raffaele Lauro dedicated to the almost fifty-year-long bond of the great artist with Sorrento. On 29th February, in the course of the Dallian day sponsored and organized by the Municipal Administration in Sorrento, and led by Mayor Giuseppe Cuomo in the Council Chamber of the Town Hall, a presentation will take place of the travel diary, “Lucio Dalla and Sorrento Tour - Stages, images and testimonies”, published by GoldenGate Edizioni (500 pages). The cover and of the introduction to the third book by Raffaele Lauro on Lucio Dalla have been made available to the public.