POLITICS AND THEOLOGY DURING THE PRESENTATION OF THE RELIGIOUS ESSAY BY ANNA MARIA GARGIULO, “MARIA, MIA MISERICORDIA”, IN MASSA LUBRENSE. A MOVING GIFT FOR THE SPEAKERS IN FORM OF LONG DISTANCE ADOPTIONS OF ORPHAN CHILDREN OR CHILDREN WITH DISABILITIES 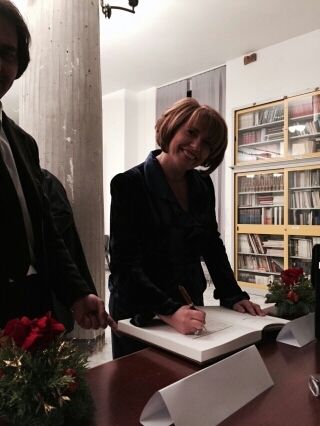 With words of thanks inspired by the Christian forgiveness of the Jubilee Year, and with a gesture of true maternal tenderness, which touched everyone, Anna Maria Gargiulo, at the conclusion of the presentation of her religious essay, “Maria, Mia Misericordia” (Mary, My Mercy), published by Piccola Editalia, held at the Hall of Sirens of the Town Hall of Massa Lubrense, donated to the distinguished speakers individual long distance sponsorships of orphan children or children with disabilities. The cultural event included greetings of the Municipal Administration by Mayor Lorenzo Balducelli, accompanied by assessors and municipal councillors. The event was marked by speeches of vast intellectual level, with topics ranging from theology to current affairs, including references to public experiences of the speakers: MEP Enzo Rivellini recalled his battle within the European Parliament for the tradition of the nativity crib; Regional Councillor Flora Beneduce made timely reference to her legislative initiatives in the Regional Council of Campania, in favour of women and marginalized people; and journalist Ermanno Corsi on his part highlighted the figure of Mary as a common heritage, not only of different religions, but also of the secular culture. Writer Raffaele Lauro concluded with his speech on “Mary, Mother of Mercy and Mother of Jesus, the bridge of grace and peace between Christianity and Islam”, the full text of which is transcribed in the attached annex (PDF).