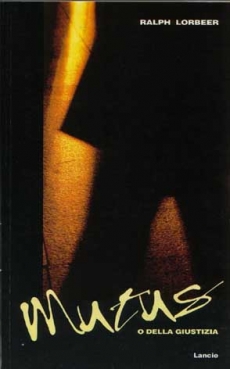 Mutus is the nickname of an elderly innocent convict, who in his protest against society chooses the path of complete silence. He communicates only with his fantastic inner world. After more than twenty years in prison spent in Pianosa, he is transferred to the island of Gorgona, where he manages to live moments of serenity in relationship with nature and animals, and, finally, in his friendship with a young prisoner, Focus, a fan of rock music. This balance, however, is suddenly shattered. A tragedy sparks. Is there a crossroad in human history, in which pain and suffering, at first glance impossible to understand, acquire a reason for being?

Mutus is a novel about the victims of justice when it, in the name of religion, political ideology or morals, violates the rules of the state of law. It is a harsh indictment against fundamentalism, intolerance, prejudice and justicialism, and against their aberrant consequences for the dignity of a human being. A historical paradigm of injustice is the philosopher Giordano Bruno, whose figure, starting from his trial, past prison, up until the execution of the sentence on the stake in Campo de’ Fiori, is evoked in these pages with extraordinary and moving narrative power.