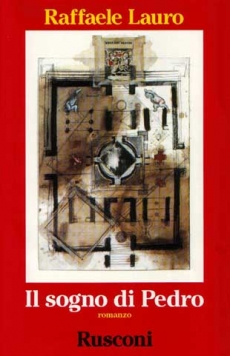 The art of speaking of art by drawing a historical fresco; and at the same time the art of embossing history with force, of making it emerge from the business of those exceptional men, the artists. This is what happens along the unravelling of the pages of this novel built by Lauro stone by stone, brush stroke by brush stroke, just like cathedrals and paintings that it brings to light. And everything becomes literature supported by both cultured and picaresque word, a spiritual traveller which reflects the ferment of the era, in which the Author has placed this story: the Renaissance. The book tells the story of Pedro Machuca, an architect from Toledo, to whom the Emperor Charles V gives the task of erecting the Alhambra Palace in Granada, a royal palace which would contrast, suprass and obscure the magnitude of the Moorish Alcazar in Spain regained for Catholicism. But it’s not easy to confront such an ancient and complex civilization as the Arab one, which dominated for so many centuries. Especially for an artist like Machuca, filled with all the anxieties of a man of his time. The projects are born, they change, they meet the inevitable obstacles of the undertakings that are not just simple actions, but also metaphors of history. And in this rhythm of time the space shapes itself: Toledo, then Naples, Rome, Florence, and Siena, with their dark alleys and radiant squares, powerful scenarios where not surprisingly one meets with extreme ease Sangallo, Giovanni da Udine, Bramante, Raphael and many others. Among taverns and cathedrals, therefore, a "dream" of Pedro Machuca acquires its shape, a dream which represents the spirit of tolerance and respect for all forms of human culture and civilization. It will or will not be achieved, it doesn’t matter. What is important is the fact that, like any dream, it reflects the invisible spheres that go beyond the individual, and that recall the entire life with its doubts and its great tasks in an ultrapersonal dimension, where the whole process of building originates with the positive outcomes of excellent literature, interspersed by yearning for ineffable spirituality. It is a novel which takes on a prophetic significance facing the present still devastated after centuries by religious and racial intolerance. The dream of Pedro prefigures, on the eve of the third Christian millennium, the expectation of a new Renaissance. This novel represents the focus on the theme of religious tolerance, preceding Sorrento The Romance of 2013.