NEW SUCCESS IN ROME FOR "SORRENTO THE ROMANCE". IT RETURNS TO PIANO DI SORRENTO IN FEBRUARY 2014 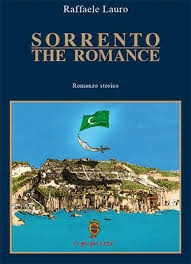 Also the second Roman presentation of the historical novel "Sorrento The Romance" by Raffaele Lauro was crowned by a complete success with the public and the critics. Seven speeches of highest and qualified level took place at the Link Campus University, in the crowded room of the Library, named after Francesco Cossiga and Guido De Marco. Vincenzo Scotti described Lauro's work as a return to the old times, when the great servants of the state were also great intellectuals and famous writers. Antonella Azzaroni stressed the psychological profile of the Author, who in three decades managed to combine the Cartesian rationality in the performance of onerous public duties with a creativity, hidden up until recently, almost afraid of being revealed. Which now, however, seems to explode in all its engaging power. Michela Insalata spoke in detail about the intelligence attributed in the book to the social and political role of courtesans of Venice and Rome in the sixteenth century, as well as the current identity between Islam and the political regime in the Mediterranean of today. Luca Mantovani emphasized the relationship between political power and sexuality in the sixteenth century, while Tommaso Mattei enhanced the value of film writing by images of Lauro, and the goal of interreligious dialogue on the basis of mutual respect between the three great monotheistic religions, all deriving from Abraham. Giuseppe Staiano placed the work of Lauro in continuity with the European literature of the nineteenth century, with particular reference to Tolstoy. Antonio Iodice concluded with the exaltation of the synergistic binding present in the novel of Lauro, between the Sorrentine microcosm and the macrocosm of the Mediterranean, back then the centre of the world. The Roman event concluded the cycle of presentations of the work in 2013. In January 2014, "Sorrento The Romance" will emigrate to South America and will return to the Sorrentine Peninsula, to Piano di Sorrento, next February 2014. In a few days, the international website of the novel, published in Italian and English, will be launched and made accessible to the general public (www.sorrentotheromance.com).