SANT’AGATA SUI DUE GOLFI (28TH AUGUST 2016) THE HALL OF THE BROTHERHOOD OF THE HOLIEST ROSARY THE PRESENTATION OF THE LATEST NOVEL OF “THE SORRENTINE TRILOGY” BY RAFFAELE LAURO, “DANCE THE LOVE - A STAR IN VICO EQUENSE” THE SUMMARY OF SPEECHES BY DONATO IACCARINO, LORENZO BALDUCELLI, GIOVANNA STAIANO, RICCARDO PIRODDI, LIVIA IACCARINO, NICOLA DI MARTINO AND RAFFAELE LAURO 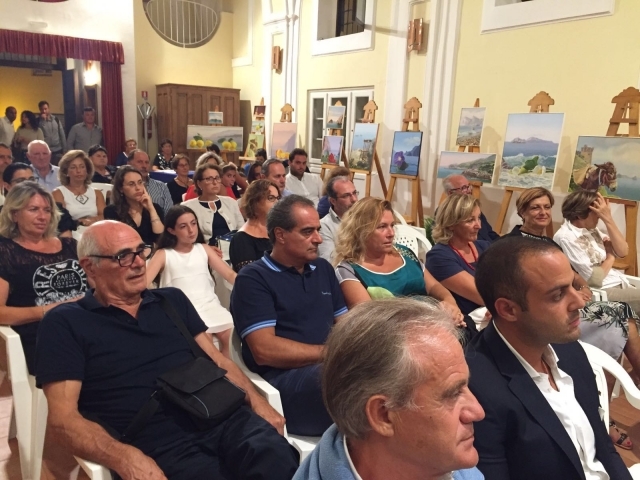 Good evening everyone. We have gathered here this evening to present the new novel by Raffaele Lauro, “Dance The Love - A Star in Vico Equense”. Not long ago we received information that the protagonist of the novel and the guest of honour of the evening, dancer Violetta Elvin, will not be able to attend due to sudden indisposition. I am truly sorry about this, because I have read the novel and I fell in love with Donna Violetta. An extraordinary figure. For this reason, let’s start right away. If the Author may allow me, I find this novel even more beautiful the the previous ones. I would like to invite the Mayor to welcome the audience and start the event.

Good evening. I welcome you on behalf of the whole Municipal Administration and thank you for your attendance. I also thank the author for his wonderful book. The first book of “The Sorrentine Trilogy”, “Sorrento The Romance - The conflict between Christianity and Islam in the sixteenth century”, I read it all, the second one “Caruso The Song - Lucio Dalla and Sorrento”, not all, and the third one, “Dance The Love - A Start in Vico Equense”, I also read it all. I liked it for the way of telling a story of a special person, Violetta Elvin. I am very sad for not being able to meet such a woman this evening. A woman, who at the height of her success leaves everything for a man, for a land close to us, but, nevertheless, ours for its morphology, which is something that very few people would be able to do. Therefore, we thank her for an example, which she can be for every person. Thanks to Professor Lauro, also for his availability and closeness to Massa Lubrense on many occasions, which I don't mention, as I usually do, because he asked me not to. I have to leave you now due to other affairs: it is the fortieth anniversary of the foundation of the Massa section of Archeoclub Italia. I leave the floor to other worthy speakers, who will certainly know how to properly describe this book. Thank you!

Good evening and thank you. It is my pleasure this evening to speak and to listen about what other speakers think about this book. I will tell you about my impressions: I am very fond of this book. I read this book quickly and with passion, and it truly engaged me. I have to mention this: I also fell in love with this extraordinary woman. Unfortunately I didn't have a chance to meet her tonight, but there surely will be an opportunity for this in the future. Without taking away the merit of the previous works by Raffaele Lauro, this recent book fascinated me in a particular way. The story of a woman who had the incredible courage and strength to make such an important and radical choice. Back then not many women were able to establish themselves in dance industry, which was extremely tough and selective. She makes it and then resigns from it for love. An incredible figure, which struck me in a particular way right from her early years. She presents herself as a girl, as a woman, as a mother, simple, humble and authentic. She is not a careerist woman who tries to achieve results at all costs, although later on she achieves them without looking for them, just simply with her curiosity, her desire to discover the world, with her studies and her sacrifices. Her whole life was marked by a positive spirit and true feelings, those that made her, one could say, a lucky woman, but not really, because it was the way in which Violetta had set herself in the world. This is what struck me about this woman: the ability to enjoy such real feelings, and not only love, like the ones she experienced with Fernando Savarese, who falls madly in love with Violetta, discreetly and simply, and waits. If it happens. And it happens. He went to see her at the theatre, he didn't court her in an obsessive way. He was there, present, until Violetta decided to make him the man of her life. But there are other feelings described in this book. For example, friendship. Between Violetta and Zarko prebil, a choreographer well known in Italy, with whom in a famous telephone conversation described in the novel she exchanges wonderful words about the meaning of her life dedicated to love, love for a man, love for art, love for nature and everything that surrounds her. So for us the life of Violetta Elvin is a message: the ability to know how to choose in the right time what’s best for her in life. This is, certainly, a great lesson. Violetta has continued to love everything around her, day after day. And this is where the beauty is within the content that can be tasted in this text: the lesson of having to continue to love the most valuable asset that we have been given, life. A little anecdote that I did not know: Violetta’s wedding in Santa Maria della Neve, where I have lived for twenty years. She could have chosen the largest cathedrals in the world and, instead, at six in the morning, in silence, she marries her beloved Fernando in a small church in a small town. This also synthesizes Violetta’s life. Thank you!

Good evening. I’ve known Violetta as an extraordinary woman, who came to “Don Alfonso” with her family, but I did not know all these facts that Raffaele Lauro made us discover. Violetta has always celebrated her birthdays at “Don Alfonso”. She used to come, especially on warm summer evenings, when it was impossible to breathe in Vico Equense and we in Sant’Agata gave her not only a physical, but also mental rest, because this coolness of Sant’Agata catches you, it overwhelms you. She was happy. As soon as she came down from the car accompanied by her family, and set foot in the avenue of “Don Alfonso”, she spread her arms and said: “I feel well here! This is the corner where I love to be with my friends and with my relatives.” We are in love with Violetta and Violetta is in love with us. It is easy to fall in love with Violetta. Enough to spend 10 minutes with her and she overwhelms you. She has a crazy sensibility, every gesture is special, and every gesture is an act of love. Also when she walks. Her every step is a thanksgiving to the Lord, because she has always looked to the heavens to thank for all that life has given her. This book has made me very excited, although I was not able to read it all, because I am in full working season. But I was fascinated by what I read. By the extremely touching events from her life. She is a truly extraordinary woman. Only a man with the sensitivity of Raffaele Lauro could have opened this safe, revealing the heart of this woman and unveiling incredible things. We call those books novels, but they are life stories. A novel, many times, is something like an end in itself, but the novels of Raffaele Lauro teach us a story written by people who lived it in person and, I assure you, it is a different story. Thank you!