SPECTACULAR SUCCESS OF THE CULTURAL EVENT "LUCIO DALLA AND THE YOUNG" AT TEATRO DELLE ROSE IN PIANO DI SORRENTO. THE THEATRE WAS OVERFLOWING WITH HUNDREDS OF YOUNG PEOPLE, TEACHERS AND GUESTS. APPLAUSE AND STANDING OVATION FOR THE EXCELLENT NARRATIVE, POETRY, MUSIC AND SINGING PERFORMANCES OF THE STUDENTS FROM THE SALVEMINI HIGH SCHOOL OF SORRENTO 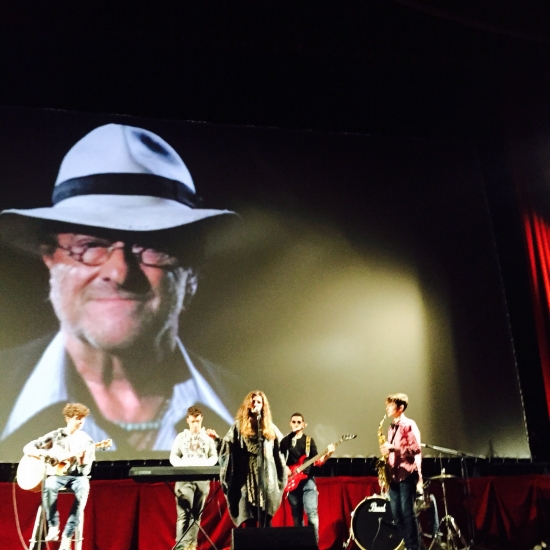 "It was a historic day for the Salvemini High School, a beautiful page for our school". This was the brief and satisfied statement by Professor Antonino Siniscalchi at the conclusion of the exciting cultural event "Lucio Dalla and the Young", which he coordinated in conscious and professional style, not deprived, however, of a meandering emotion at the stage of Teatro delle Rose in Piano di Sorrento, while the big screen displayed hundreds of beautiful images of Dalla in Sorrento. Among those, also the pictures of the very young correspondent of 'Il Martino', while in the summer of 1990 he interviewed the great artist on the terrace of La Scogliera in the port of Sorrento, thus revealing to the Italian musical world, as a real scoop, the title of the much anticipated album of Dalla, "Cambio". The precise order of the line-up (two hours in all!) contributed to declare the full success of the event, which combined together, in the spirit of Dalla, the narrative and poetic discourse interspersed with musical interludes. At the opening, the head teacher, Patrizia Fiorentino, with a brilliant, polished, deep and far-sighted opening speech admitted the innovative value of that educational and learning experiment, the advanced form of learning and fun, linked to the culture of the area, and able to closely involve young people. She did not forget to thank Raffaele Lauro for having offered with his work, both with the novel "Caruso The Song - Lucio Dalla and Sorrento", and the documentary film, "Lucio Dalla and Sorrento - Places of the Soul", the decisive contribution to the organization of the event. The headmaster and Siniscalchi both wanted to bring back the warm memories of Lauro teaching philosophy in the newly found Salvemini High School. The Sorrentine writer, sitting in the front row in the audience next to Sorrentine poets, who with their verses celebrated Dalla, was visibly moved by this unexpected reference to his pioneering past, and so were moved the poet friends Salvatore Russo, Gianni Terminiello, Luigi Leone and Anna Maria Gargiulo. Further on the real stars of the event stepped into the limelight: the students-speakers, who presented their contribution to reflections on the novel chosen freely by their reading groups, Sonia Pappalardo, Chiara Somma, Claudia Cafasso and Dario De Rosa. They were announced by a refined introduction on teaching methodology by Professor Marisa Cimmino, who together with her colleagues, Marilù Ruggiero and Patrizia Aversa, coordinated the work of the reading groups. This was followed by the recitation of poems by students Davide Coppola, Gaetano Chiacchio, Anna Apreda and Amalia Coppola. The appreciation for the commitment of the students was expressed by thunderous applause from the audience of over a thousand people, and in some cases by a true standing ovation. The presentations of literary commentary and drama were interspersed by performances of the most beautiful songs by Dalla from beginning to end (4 marzo 1943, Futura, La sera dei miracoli, Caruso and Disperato Erotic Stomp), performed by the band composed by students Matteo Moretto, Marco Di Martino and Antonio Fiorentino, and interpreted by the beautiful voices of students Olivia De Rosa, Flavia Gargiulo and Giorgia Maurizio. The most emotional highlight on stage was by far Angelo Leonelli, an old friend of Dalla and the inspirer of his masterpiece, "Caruso", who with moving remarks wanted to remember a dramatic episode, which Dalla told him about. An incident lived at the age of seventeen with the famous trumpeter, Chez Baker. An incident that made Dalla a sworn enemy of drugs. The concluding appeal of Leonelli to the audience of students ("Stay as close to the music, as far you can stay from drugs!") was welcomed with thunderous applause, and had a great impact on the present. Lauro concluded the event, which he called a Christmas present, by thanking everyone, students and teachers, with a brief expression: "This morning was certainly a powerful evidence of a good school!"