"THE ANNUNCIATION" BY MARCELLO MONDAZZI AT THE BROTHERHOOD OF THE MOST HOLY ROSARY AT SANT'AGATA (SATURDAY, 14 DECEMBER 2013, AT 12.30 PM) 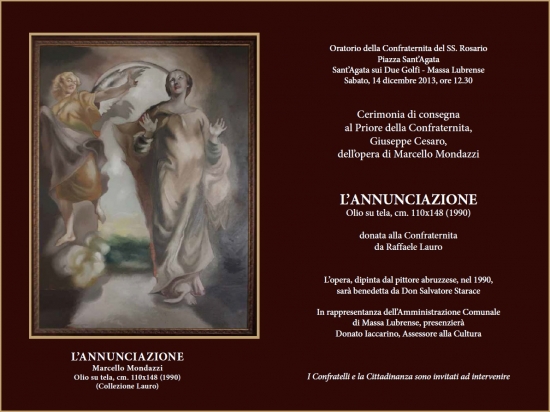 On Saturday, 14 December 2013 at 12.30pm, at the Oratory of the Brotherhood of the Most Holy Rosary at Sant'Agata, a ceremony will be held, during which the pictorial work "The Annunciation" by Marcello Mondazzi (Oil on Canvas, 110x148cm) donated to the Brotherhood by Raffaele Lauro, will be delivered to Proir Giuseppe Cesaro. The religious work painted by the artist from Abruzzo in 1990 will be blessed by Rev. Salvatore Starace. The donor will participate at the event. The Councillor for Culture, Donato Iaccarino, will preside on behalf of the Municipal Administration of Massa Lubrense. Marcello Mondazzi (Pratola Peligna – L’Aquila, 1954) is a painter and sculptor originally from Abruzzo, who lives and works in Rome. The artistic production of Mondazzi is part of the rediscovery of the figuration of transavatgarde and quotationism. The works of Mondazzi have been shown in monographic and collective in exhibitions in Italy and abroad (USA, Switzerland and Germany). They are kept in Italian and foreign private collections and museums. In the '90s Mondazzi painted for Raffaele Lauro a cycle of religious works entitled "On the Road to Damascus" (www.raffaelelauro.it), including, in addition to "The Annunciation": The Conversion of Saul, The Baptism of Jesus, The Samaritan, The Temptations, The Garden of Gethsemane, the Crucifixion, the Deposition, The two at Emmaus and The Fall of the Angels.