"SORRENTO THE ROMANCE": AN HISTORICAL NOVEL ABOUT THE TURKISH SACK OF SORRENTO IN 1558 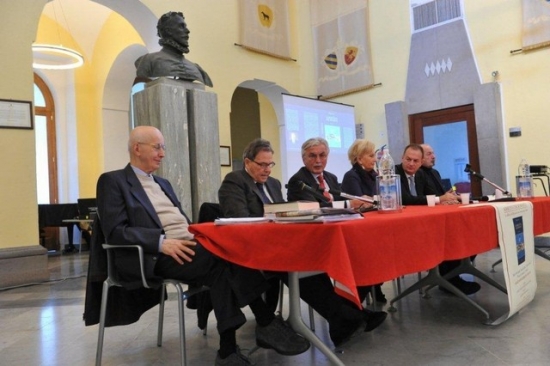 After the national preview in the Senate of the Republic, the historical novel by Raffaele Lauro, etitled "Sorrento The Romance", published by GoldenGate Edizioni, will be officially presented tomorrow at 10:30 am at the Town Hall of Sorrento on the initiative of the Municipal Administration. The speeches will be presented by: Antonino Pane, Maria Teresa De Angelis, Salvatore Ferraro, Ettore Cuomo, Teresa Armato and Francesco Pinto. The event will be concluded by the Mayor of Sorrento, Mr. Giuseppe Cuomo. We have interviewed the Author on his tenth literary work, after the onset in 1987 with "Roma a due piazze" published by CEI and awarded the "Premio Chianciano Fiction Debut".
Where did the inspiration for this historical novel come from?
After a mysteriously sleepless night of five years ago, spent in a beautiful suite of Hotel Michelangelo in Sorrento, I discovered that I was staying in the Tower of Salvation, where hundreds of Sorrentines found refuge and miraculously escaped the Turkish Sack of Sorrento of 13 June 1558 .

A tragic story?
The Turks landed 130 galleys under the command of Admiral Piyale Pasha and in the course of the entire day devastated first Massa Lubrense and then Sorrento, killing thousands of people and dragging away as hostages about 2500 men, women and children. Only those were saved, who managed to take refuge in the fortified house of Giovanni Andrea Romano, located outside the city walls towards Piano.

A novel about local history then?
Absolutely. The novel parts of this tragic local event to expand to the whole historic setting of the sixteenth century and to the Mediterranean conflict between Christianity and Islam, with the core of the battle of Lepanto in 1571 won by the fleet of the Holy League, commanded by Don John of Austria, the half-brother of Philip II, King of Spain.

From the particular to the universal, and with which thread?
The guiding thread of the novel is the tormented and uplifting human story of the protagonist, Marino Correale, who converts to Islam and ascends the degrees of power in the Court of the Sultan of Istanbul, Suleiman the Magnificent, in the service of the Grand Vizier Sokollu Mehmet Pasha. He is captured by the Spaniards at Lepanto in 1571, trialled by the Holy Spanish Inquisition as a renegade, and sentenced to life in prison. Then, after a slow process of expiation, he is reconciled with the Holy Mother Church and dies in Sorrento as a Benedictine monk at the dawn of 13 June 1600.

Is Marino Correale a historical character?
No. He is the fruit of my narrative invention, as all the events that accompany him from birth to death, even though he was designed with the Manzonian criterion of historical verisimilitude.
Marino Correale, then, is a symbol of the clash between Christianity and Islam?
He is its positive metaphor: Marino, in the never-ending search for truth and God, denies two faiths, but returns to the Holy Mother Church with the conviction of the need for dialogue among the monotheistic religions (Judaism, Christianity and Islam), as it is the only way to avoid the exploitation of the One God by political powers for the sake of power and material interests.

A highly topical issue?
During the presentation in the Senate, Archbishop Vincenzo Paglia, President of the Pontifical Council for the Family, masterfully highlighted this aspect of the novel, aligning it to the pontificate of Pope Francis, who has called for dialogue between Christians and Muslims, to overcome the misunderstandings of the past and to avoid the establishment if the Islamic religious fanaticism.

The novel contains characters of narrative invention and historical figures?
Certainly. The most significant historical figures, in my opinion, are represented by the Grand Vizier Sokollu and by the Archbishop of Sorrento, Giulio Pavesi, the father of the moral and material reconstruction of Sorrento after the devastation of 1558.

A study of previously unseen documents?
I was helped in this by my co-workers and scholar friends, whom I thank again from my heart. All the political, economic and social glimpse of Sorrento, Massa Lubrense, Piano, the viceregal Naples, Papal Rome, the Serenissima Republic of Venice, the imperial court in Istanbul and the royal court of Spain, has been reconstructed on the basis of original documents.

Even the sexual habits of the time?
The image of the political, and not only sexual entertainment role of courtesans in Venice, Rome and Naples, as well as that of the women in the harem of the Sultan of Istanbul, was also retrieved from the original documents.

What is the future of this historical novel?
I hope it will be an instrument of knowledge and comparison in institutions, society and schools. The website of the novel (www.sorrentotheromance.com), in Italian and English, can become an effective mean of education and also promote tourism in Sorrento and the Sorrentine Peninsula. The combination of culture and tourism in this novel is clear. The English version is now ready. The versions in Spanish, Turkish, Mandarin and Japanese will follow.

After completing this work, are you preparing any new narrative projects?
I am writing the novel "Caruso The Song", dedicated to the musical masterpiece of Dalla and to the great emotional bond of Lucio with Sorrento, based on the authentic testimonies of his Sorrentine friends. The song "Caruso" is the culmination of a feeling of love for Sorrento, born at the very beginning of the career of the great artist in the "Fauno Notte" of Franco and Peppino Jannuzzi.