"SORRENTO THE ROMANCE" LANDS IN SORRENTO AND MASSA LUBRENSE 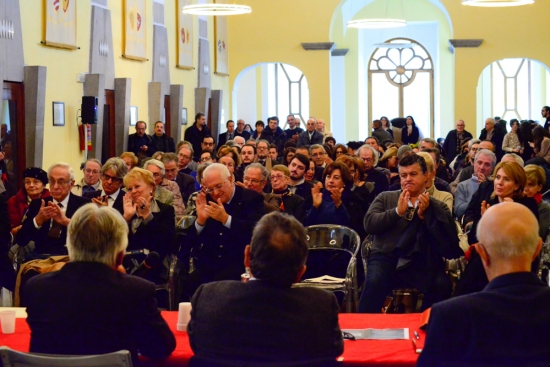 After the great success in the Senate of the Republic, the historical novel by Raffaele Lauro, etitled "Sorrento The Romance", published by GoldenGate Edizioni, will be presented tomorrow at 10:30 am at the Council Chamber of the City of Sorrento under the auspices of the Municipal Administration. The event will be hosted by journalist Antonino Pane. The introduction speech will be held by the Councillor for Culture, Maria Teresa De Angelis. The speakers: Salvatore Ferraro, Pontanian Academic; Ettore Cuomo, Professor of the History of Political Thought; Teresa Armato,Giornalista, Senior Editor of “Il Mattino” and Prof. Francesco Pinto, Head of the RAI Production Centre in Naples. The event will be concluded by the Mayor of Sorrento, Mr. Giuseppe Cuomo. We have interviewed for the Metropolis Mr. Raffaele Lauro, Prefect and Senator of the Republic in the sixteenth Legislature. We have interviewed the Author on the eve of the event.


It is your tenth literary work after the onset in 1987 with "Roma a due piazze" published by CEI and awarded the "Premio Chianciano Fiction Debut". Why a historical novel this time?
The theme of the conflict between Christianity and Islam didn't soak in blood only the sixteenth century, but continues even in the history of today. It threatens the future of the world. The religious fanaticism of the Islamic origin not only hit the Twin Towers in New York in 2001, but every day kills innocent Christian victims in many Islamic countries. Although the international public pays little attention to this bloody return to the past: people killed for the professed faith, in their own church, while praying or participating in the Holy Mass. We must build new bridges with Islam for the spirit of dialogue to prevail and to prevent the establishment of the extremist factions.

The dialogue between Christians and Muslims, which Pope Francis talked about on the occasion of the end of Ramadan?
The election of this pontiff is a sign of Divine Providence. The ideological matrix of the novel, in philosophical and theological terms, fits perfectly with the spirit of the appeal of Pope Francis. The protagonist of the work, the Sorrentine patrician Marino Correale, a fruit of my narrative invention, in the tireless pursuit of truth and God embarks on a long life journey: from conversion to Islam, trough a long expiation, to reconciliation with the Catholic and Christian faith of his origin. But with a new and great awareness: only the dialogue between the three great monotheistic religions will prevent new wars, fought falsely in the name of God, but in reality for the desire for power and riches of men.

The human story of Marino runs through the entire sixteenth century?
He is born in Sorrento in 1540. He becomes cavalier at the age of 18. He is taken to Istanbul after the Sack of Sorrento. He converts to Islam, attends the Academy of the Janissaries, and then, at the side of the Grand Vizier Sokollu arrives at the summit of power, to the Sublime Porte. He is captured by the Spaniards at Lepanto in 1571, trialled by the Spanish Inquisition and sentenced to life in prison. From that moment, in the silence of a Benedictine monastery, begins his slow return to the faith in Christ the Savior. The statue of the Dead Christ, which he sculpts in the oratory of Sant'Agrippino of Sorrento, is the fruit of his reconciliation: a gift of love to the future generations of Sorrento.

Many historical characters crowd the historical novel in its storyline of great effectiveness. And with significant frescoes of the great capitals of the seventeenth century.
I had to "come to terms" with Christian rulers, Protestant princes, popes, bishops, archbishops, priors, grand masters, doges, sultans, grand viziers, pirates, admirals, dukes, princes of blood, revolutionaries, Renaissance lords, courtiers, cardinals , ambassadors, bailiffs, painters, sculptors, knights of Malta and Spanish, Habsburg, Venetian and Turkish spies. It wasn't easy to narratively tame this crowd of characters. The easiest and most rewarding for me was describing the Venice of Titian, the Naples of the Spanish Viceroys, the Instanbul of mosques of architect Sinan and the Madrid of the Holy Inquisition.

Why does the natural beauty of Sorrento, Massa Lubrense, Piano, Vico Equense and Faito triumph in the novel?
A journalist and the editor of the English version of the work, who do not know Sorrento and the Sorrentine Peninsula, have revealed to me their desire to physically visit the location of the novel: the hills of Sorrento, marinas, gardens, cliffs, the islands, caves, churches, monasteries and abbeys. And the will to come to Sorrento, to enjoy the cuisine and the recipes, which give colour and flavour to many pages of the novel. The scent of orange groves exhales from the pages of the book. "Sorrento The Romance" incorporates perfectly the combination of culture and tourism. A marketing operation for our land, of which I am very proud, as evidenced by the website of the novel in Italian and English, created "brilliantly" by the young Mauro Siniscalchi: www.sorrentotheromance.com.

Will this historical novel travel a long stretch of road?
The whole 2014 is now dedicated to promote the book in every Italian region and abroad, starting from South America, at the Italian Institutes of Culture and the Communities of Campania and Sorrento. For this reason, at the beginning of this journey, I trust in the moral support of the Local Authorities of the Sorrentine Peninsula, from Sorrento, Massa Lubrense, S. Agnello, Piano di Sorrento, Meta and Vico Equense, as well as hoteliers, tour operators, restaurateurs and merchants. This book can become a permanent ambassador of our country, especially when translated into Spanish, Turkish, Russian, Mandarin and Japanese.

Can it also be useful for the formation of young people?
Certainly. I am in contact with many school officials to organize meetings of study and debate, days of study and research for students. Knowing your story becomes a mean of cultural growth, facilitated by reading a historical novel rather than a historical essay. I am available to the educational institutions of the Municipalities and the Region of Campania.

Because of this program, will you have time for new narrative projects?
I have started writing the novel "Caruso The Song", dedicated to the musical masterpiece of Dalla and to the great creative bond of Lucio with Sorrento, based on the authentic testimonies of his Sorrentine friends. The song "Caruso" is the evidence of a feeling of love for Sorrento, born at the very beginning of the career of the great artist in the "Fauno Notte" of the Jannuzzi brothers, Franco and Peppino. Caruso and Torna a Surriento were the biggest promotional operations for the image of Sorrento in the World.