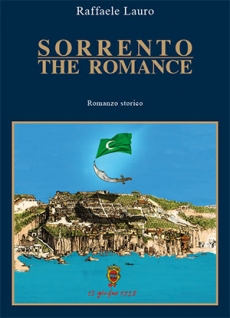 In the historical setting of the sixteenth century in Europe, bloodied by religious wars and by the clash between Christianity and Islam on the Mediterranean Sea, with its epicenter in the naval battle of Lepanto (1571), develops a human, extraordinary and tormented story of the protagonist, Marino Correale: from his birth in a patrician family of Sorrento, until his death in the Sorrentine Benedictine convent of St. Agrippinus. Searching relentlessly for the Truth and for God, Marino goes through inspiring and painful events: tragic Turkish assault of Massa Lubrense and Sorrento (13 June 1558); conversion to Islam; success in Istanbul at the court of Suleiman the Magnificent; deep love affair and marriage with Sultan’s niece, Princess Yasmin; death of his wife and son during childbirth; his capture at Lepanto by the Spaniards; life sentence by the Spanish Holy Inquisition in Madrid; long and painful reconciliation with Christianity; atonement of sins in the Benedictine monastery of San Juan de la Peña, until his return to Sorrento, in sickness and anonymity, in the guise of brother Antoninus. Marino’s life becomes, therefore, a prophetic metaphor illustrating the overcoming of the conflict between the monotheistic religions of Judaism, Christianity and Islam through dialogue, provided they are not exploited by political power. A prophecy of universal value that can illuminate the present and future of the humanity after the tragedies of the past.

Zofia Romanis (born: 11 December 1982) is a translator in English, Italian and Polish. She lives in Birmingham (UK). Her translator's experience goes back to 2003. In 2006 she was awarded a Master’s Degree in Italian Philology at Warsaw University in Warsaw, Poland. She has moved to England in September 2006 and since then successfully developed her own activity as a freelance translator. Currently studying to obtain a postgraduate Diploma in Translation by the Chartered Institute of Linguists in London. She translates in various fields, from technical manuals to literature.