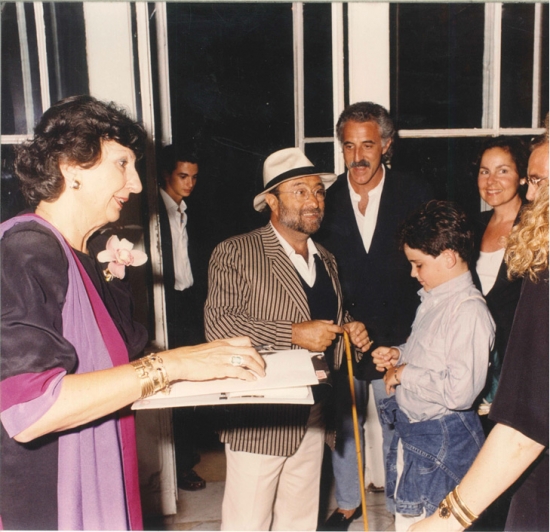 Tireless in creation, Raffaele Lauro once again returns to Sorrento, his place of birth and election, his constant reference in any writing, project and event. The occasion is his latest book "Caruso the Song – Lucio Dalla and Sorrento", dedicated to the singer/musician bonded with our town by a long and beloved presence. Irresistible in his invention, Raffaele Lauro on the 28th of this month will present the book in the Council Chamber of the Town Hall of Sorrento, during the national première of the work dedicated to the author of "Caruso", a song which, just like "Come back to Sorrento", has become the most effective and poetic slogan of the birthplace of Torquato Tasso.

We have been talking about your new book for months. Could you tell me, what was the origin of the idea to dedicate it to Lucio Dalla?

The news of the death of Lucio, which occurred suddenly of a heart attack on the morning of 1st March 2012, reached me in the Senate... and it shocked me. I decided immediately to arrange a Mass in the Church of the Rosary at the Cape of Sorrento for the following Sunday. For the whole day I gathered dozens of stories and memories of friends, which expessed love and dismay. After the commemorative speech the desire to write a novel about the poetic and the nearly fifty-year-old bond of Lucio with Sorrento was born in me to deepen his legacy. On the other hand, when in 2006 both of us received the "Sorrento in the World Award" he asked me... when I was going to write about him!

What kind of a relationship did you have with Lucio? When and where did you meet him?

It was not a direct relationship but it grew and developed through his friends, like Angelo Leonelli. We were introduced by Franco Jannuzzi in his little office at the "Fauno Notte Club", where he was an animator along with his brother Peppino. At that stage Lucio played clarinet in the band called The Flippers.

What are the main memories which you associate with him?

When we were introduced on that September afternoon, an almost magical understanding was born between us, mediated by the common love for the sea. We talked about the sea for an hour. Then he became curious when I spoke of the evolutionary theory of Darwin and Freud's psychoanalysis. His curiosity exploded like an elf, he grabbed the clarinet, jumped on the chair and began to play interrupting it with singing the words "Professor, Professor, Professor" addressed to me.

His ability to become infected by the humanity of others. I appreciated his universe-love, without limits or boundaries, accompanied by modesty in terms of his personal feelings of love. And then the cultural affinities: those literary ones with Marguerite Yourcenar, the film ones with Federico Fellini, the ones with the world of opera and pop: from Puccini to Pink Floyd.

So far you have written eleven books, including (I quote a few): "Quel film mai girato", "Cossiga suite", "Sorrento The Romance"… What were the difficulties of the current book dedicated to Dalla with regards to the previous books?

What does writing mean to you?

For me writing is like life. The writer needs to know how to invent reality. Here I am a bit like Lucio, who invented reality with his songs.

Has Lucio ever revealed a secret to you?

More than a secret I remember something he said to me in 2006: "We have to try to meet in Rome or in Sorrento. It would be great to talk about us, between us, alone."

Which of the many Dalla's songs you like the most?

The ones, which will be played at the concert on Saturday, 28th February, held on the occasion of the presentation of my book. The first one of all: "Caruso", then "4 marzo 1943", "Piazza grande", "L'anno che verrà" to follow.

Finally, what does Sorrento mean to you?

Although I moved to Rome in 1984, my bond with Sorrento and the Peninsula has never been broken. The project of my Sorrentine trilogy was born precisely out of the love I have for my land. Also for this reason, after "Sorrento The Romance" and "Caruso The Song" I will conclude it with a tribute to Vico Equense, the birthplace of my maternal grandparents, with "Dance and love – Marina d’Aequa".

What did Lucio Dalla tell you about Sorrento?

Here are Lucio's words: "I have always thought that Sorrento for me was the true corner of my soul. The one to treasure and which first of all has a special human tissue, created of friends, entrepreneurs, hoteliers, taxi drivers, who have always represented the precious variant of my life. Sorrento is the authentic place of my life.