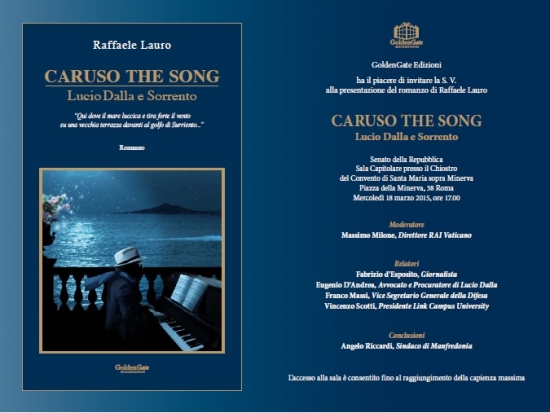 After the national première in Sorrento on 28th February 2015, on the third anniversary of the passing of Lucio Dalla, the novel by Raffaele Lauro, "Caruso The Song - Lucio Dalla and Sorrento" (GoldenGate Edizioni) will be presented in Rome at the Chapter Hall of the Palazzo della Minerva (The Senate of the Republic), on Wednesday, 18th March 2015 at 5 pm. The event will be moderated by Massimo Milone, the head of Rai Vaticano. Among the speakers: journalist, Fabrizio d'Esposito, lawyer and Dalla's attorney, Eugenio D'Andrea; Deputy General Secretary of Defense, Franco Massi; and President of Link Campus University, Vincenzo Scotti. The event will be concluded by Angelo Riccardi, the Mayor of Manfredonia, the beloved city of the great artist from Bologna right from his childhood days. The opening of the event will consist of the screening of the documentary film "Lucio Dalla and Sorrento - The Places of the Soul", filmed by SorrentoTV in Piazza Tasso, Marina Piccola, Marina Grande, Suite Caruso (Grand Hôtel Excelsior Vittoria) and Suite Dalla (Hilton Sorrento Palace), where Dalla completed his masterpiece of "Caruso" (www.carusothesong.com).