Sei qui: Home » News archive » A 2015 tribute of Sorrento to Lucio Dalla on the third anniversary of his passing: a bigraphical novel, a concert, five documentar[...]

A 2015 tribute of Sorrento to Lucio Dalla on the third anniversary of his passing: a bigraphical novel, a concert, five documentaries on the spiritual places and a fragrance. with the involvement of the sudents from sorrento. 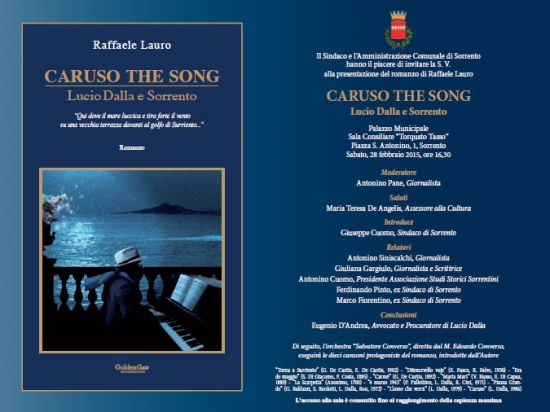 Sorrento is preparing to pay in 2015 a worthy tribute to its honorary citizen, Lucio Dalla, with a series of events to be held on the eve of the third anniversary of the death of the great artist from Bologna (Montreux, 1st March 2012). At the initiative of the Municipal Administration, on Saturday, 28th February at 4:30 pm, the novel by Raffaele Lauro entitled "Caruso The Song - Lucio Dalla and Sorrento", on the poetics of the singer and Dalla's almost fifty-year-long bond with Sorrento, will be presented at the Town Hall. With the introduction of the Mayor, Giuseppe Cuomo, it will be discussed by journalists, writers, ex-mayors and the Sorrentine friends of the artist. The conclusion of the presentation will be followed by a concert of the "Salvatore Converso" Orchestra conducted by Edoardo Converso, the program of which includes the performance of ten songs-protagonists of the novel to be introduced by the Author: "Torna a Surriento" (G. De Curtis, E. De Curtis, 1902); "Ditencevello vuje" (E. Fusco, R. Falvo, 1930); "Era de maggio" (S. Di Giacomo, P. Costa, 1885); "Carmè" (G. De Curtis, 1892); "Maria Marì" (V. Russo, E. Di Capua, 1889); "La Scarpetta" (anonymous author, 1700); "4 marzo 1943" (P. Pallottino, L. Dalla, R. Cini, 1971); "Piazza Grande" (G. Baldazzi, S. Bardotti, L. Dalla, Ron, 1972); "L’anno che verrà" (L. Dalla, 1979) and "Caruso" (L. Dalla, 1986). Five documentary films on the locations most beloved by the singer (Piazza Tasso, Bar Fauno and Fauno Notte Club; Marina Piccola and the terrace of La Scogliera, Marina Grande, where he received the Premio Caruso award, Grand Hotel Excelsior Vittoria, where he composed "Caruso", and the Suite at the Hilton Sorrento Palace, where he finalised the text and the music for his masterpiece), produced by the SorrentoChannel for GoldenGate Edizioni of Rome, will be broadcast in the network and subsequently screened during the presentation of the book in the Senate on 18th March 2015. Moreover, a photographic exhibition entitled "Lucio Dalla and Sorrento", curated by Antonino Fattorusso, will be set up at the Town Hall. On this occasion, the Sorrentine profumists, Limone, will launch a new fragrance called "Assaje", with the notes of lemon, which Dalla truly loved. A major cultural event of music and poetry dedicated to Dalla, "Lucio Dalla e i Giovani" (Lucio Dalla and the Young), for the students of the Sorrentine Peninsula will take place in the following weeks, during which, in addition to the readings from the novel and performances of Dalla's songs, there will be poetry readings dedicated to the artist, written by the leading Sorrentine poets (Salvatore Russo, Gianni Terminiello, Anna Maria Gargiulo, Luigi Leone and Salvatore Cangiani), reflecting the popular roots of Lucio's memory in the community of Sorrento.