Sei qui: Home » News archive » "Caruso The Song - Lucio Dalla and Sorrento": a website with the previews and details on the newest Biographical Novel of Raffaele[...]

"Caruso The Song - Lucio Dalla and Sorrento": a website with the previews and details on the newest Biographical Novel of Raffaele Lauro, dedicated to Lucio Dalla, has been made available to the public 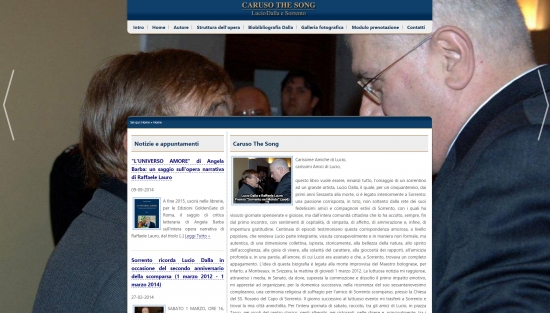 On the occasion of the third anniversary of the death of Luccio Dalla, the new biographical novel by Raffaele Lauro, "Caruso The Song – Lucio Dalla and Sorrento", dedicated by the Sorrentine author to the masterpiece of Dalla and to the singer-songwriter's from Bologna bond with Sorrento, will be presented during the national première in Sorrento, on Saturday, 28th February 2015. In his work, the author tells in a storytelling, yet documentary form, the story of this 50-year-long relationship, starting from the early sixties and the arrival of the young and funny clarinettist to Sorrento along with the band of The Flippers to the Fauno Notte Club of Franco and Peppino Jannuzzi, up until the death of the artist in Montreaux on 1st March 2012. Awaiting the presentation event in Sorrento the publishing house of GoldenGate Edizioni in Rome has opened to the public a dedicated website (www.carusothesong.com), where the readers can find details and previews of the work: the cover, the plot (in eight parts), indexes of names of Lucios' sorrentine friends, of places on the Sorrentine Peninsula, which he loved and visited (marinas, harbours, beaches, bays, restaurants, hotels, squares and churches), of songs mentioned in the novel, as well as an ordering form.