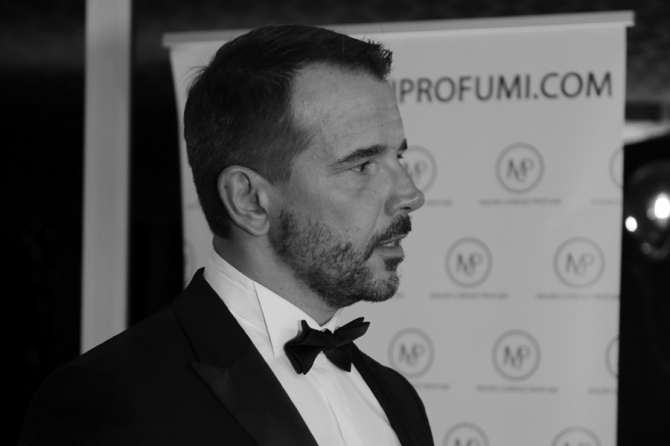 “When I was a kid and lived with my family, I thought that catching every scent, even the faintest one, was a flaw. Growing up, I realized that this was actually a special gift, and I began trusting it”, this is how Mauro Lorenzi tells us when and where everything began. Roman, class of 1974, graduated in Political Science, passionate about niche perfumes and engaged in the art of excellence perfumery, he would have expected anything in his life, except becoming one with his skill and launching a business based on his nose, the true added value.

Mauro Lorenzi has created niche, innovative perfumes, inspired by the seven hills of Ancient Rome: Aventinus, Caelius, Capitolium, Esquilinus, Palatinus, Quirinalis and Viminalis, a collection, the “Septimontium”, taking its name from the religious holiday celebrating the seven hills on which the Urbe was founded. Through historical, naturalistic, floristic and urbanistic researches, he discovered the seven hills were dotted with beautiful flower beds, woods and lush vegetation. Therefore, it was quite easy isolating the basis natural essences. A fil rouge connecting Rome to Capri, where the Roman emperor Tiberius Caesar Augustus made build several imperial villas. In these perfumes, inspired by Rome, there is something related to Capri, because everything began here.

“For me, Capri has an essential role and a special relationship, I often came here in both spring and autumn, when the scents are more intense, especially in the path leading to the Fontelina, you can clearly perceive the scents of the underbrush mixed with iodine, creating a combination between land and sea, a true source of inspiration. Artisanal, and not commercial perfumes, created exactly as I envisioned, following my interpretation, characterized by key elements: wellness, meaning that those wearing the perfume must feel good with the essence they are wearing. Individuality must emphasize the uniqueness of those wearing the perfume, exactly as a tailor-made dress. The perfumes must assume the personality of the wearer. Persistence, another key aspect, as a perfume must remain on the skin, it must be perceived even in time, it must be as a second skin”.

An artisanal production, that Mauro Lorenzi follows in all its realization process, not limited to content, but also curating the packaging. From the glass bottle, to the cap, the retail box, everything is created following his creativity, before being handed to the client.

“I am very happy and satisfied to have turned a passion into a business, creating and distributing natural fragrances, innovative and lasting. My perfumes are like children to me, I created them and love them all the same way, their absolute uniqueness makes them fitting for everybody, without gender differences. Perfumes accessible to everyone, with an inclination towards an upper-middle audience, lovers of glamour and luxury, meeting here in Capri, of which it is a global icon. Creating, with these fragrances, new perfumes and cosmetics is a natural evolution, an unavoidable outcome: candles, ambient scents, body lotions and, why not, a collection entirely dedicated to Capri”.