“DON ALFONSO 1890 - SALVATORE DI GIACOMO AND SANT’AGATA SUI DUE GOLFI”. THE NEW NOVEL BY RAFFAELE LAURO CREATES A PERFECT BALANCE BETWEEN HISTORICAL FIGURES AND FIGURES OF NARRATIVE INVENTION. DIRECTOR ELEONORA DI MAIO INTERVIEWS THE AUTHOR ON THE STAGES OF HIS CREATIVE PROCESS 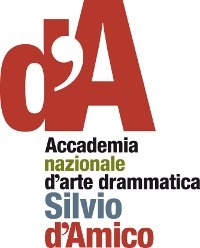 I have been a friend of Raffaele (Lauro) since I was young, now a few years have passed since he taught History and Philosophy at the “Gaetano Salvemini” high school, and the friendship became more intense when he became a Councillor for Culture of the City of Sorrento, a tireless animator among young people and for us, the young people, with some memorable cultural initiatives that have marked many of us as a prelude to some of our future professions as well. I remember, in particular, the “Theatrical Reviews” for high schools, in collaboration with the unforgettable maestro Bruno Cirino Pomicino; the “Scuola di Teatro” entrusted to RAI director from Turin, Lorenzo Ferrero di Roccaferrera; the launch of our local radio, “Radio Sorrento International”, with my late brother Ottavio and with Giuseppe Tramontano, now established cinema, theatre and classical ballet costume creator; the launch, at Teatro Armida, of “La Gatta Cenerentola” by maestro Roberto De Simone, with the extraordinary Concetta Barra, mother of Peppe and Gabriele; literary prizes and classical dance performances. It’s hard to remember everything! Fervent years of initiatives and youthful enthusiasm. Then, Raffaele moved to Rome for a brilliant institutional and political career, however, not renouncing his passion for cinema (screenplay, direction) and narrative, obtaining in 1987 the “Premio Chianciano di Narrativa Opera Prima” award with “Roma a due Piazze” published by CEI. I confess that I have not thoroughly studied all of his sixteen novels, however I truly appreciate the latest ones, those dedicated to the great Lucio Dalla and the Russian dancer Violetta Elvin. Dalla made us meet again from the artistic point of view when Raffaele entrusted me with the direction of the evening on 4th March at the Fauno Notte Club in Sorrento to celebrate Lucio’s birthday (4th March 1943 - 4 March 2017) with my performance company “Cabaret Chantant” and with the singer Francesca Maresca, who passionately performed the song of “A ragamuffin, a clown” dedicated on this occasion by Raffaele to the great artist. An evening of success and emotion, to be remembered! For this reason, he offered me to read his novel, “Don Alfonso 1890 - Salvatore di Giacomo and Sant’Agata sui Due Golfi”, featured in its contents through a fictional reconstruction of the famous dynasty of restaurateurs-hoteliers, the Iaccarino from Sant’Agata sui Due Golfi, through the celebration of our beloved coast, from Agerola to Massa Lubrense, and in form of writing through images. Where characters, both historical and in particular those of narrative invention, in their vital concreteness and in their complex psychological profiles become emblematic and metaphorical, while remaining essential to narrative fabrication. I wanted to discuss with him the creative process and especially certain inventive characters, who do not really seem to be so.

Q.: Unlike other well-known writers, with whom you share a remarkable ability to see, matured in relation to your professional experiences, I was struck by your skill, which certainly comes from your diverse education, with which you profusely try, without however ever burdening the reader, to mix “real worlds” and “fictional worlds”, historical characters and characters of narrative invention. How do you determine this creative process, which in the end does not allow one to distinguish the real events from what you invented? Becoming a true narrative value, the value of your works?

A.: What you, Ele, define as my creative process, after the birth of inspiration for a novel focused on a person, an event, or a story, is divided into two distinct phases. The first one can be described as documentation. That is, the search for written documents and oral testimonies to equal extent, in a continuous osmosis. Verbal testimonies may create the need to draw attention to other documents, other acts, writings, essays, press articles and publications. Likewise, a document can be useful to locate and trace a witness, who with their live voice and a simple detail (the writer must never overlook the details!) opens further areas, new horizons and wider narrative perspectives. A narrative project, a novel structure comes out of this first stage, with the identification of historical characters to be presented and linked to the narration, with places and times of narrative action, with plot twists, with tracks to confirm, to broadly return to later on. The “Struktur” as defined by the Germans. The construction, the summary and also the chapters. The whole thing, however, without rigidity because often what you thought of as a rich source is drying out immediately, while what looked like a brook becomes an impetuous river. It depends on sensitivity, cultural education, values, passions, and also on the neuroses and sufferings of the writer. The realistic and hyper-realistic illusion, a kind of French matrix, remains the same: an illusion. A book does not write itself, objectivity does not exist. Every fictional story as well as every character, also a historical one, whose life and dialogue need to be reconstructed, resembles unconsciously the biographical elements of the author, lived or relived by him, also at an unconscious level.

Q.: What are the characters of total narrative invention then? Why do they become essential?

A.: To fill the voids, to make the narrative action coherent, to connect historical characters among themselves and to harmonize the events. For example, in this novel, the American stage of the young emigrant from Sant’Agata sui Due Golfi, the fourteen-year-old Alfonso Costanzo, known as Alfonsino, was full of gaps. Hardly anything was known about his formative experience, not even in absolutely declinable, negligible, nor fascinating for me way! No documents, no photographs, not even the registration of his entry to America (The registers were later introduced at Ellis Island). No news on his Atlantic journey. No direct witnesses. Indirect witnesses with little information: the American uncles, Luigi and Carolina, the employment as a bricklayer, and then as an Italian American boxing masseur, the invention of the strascinati and return to Italy with some savings after only four years.

A.: Then we began to investigate the tragic and salient phenomenon of southern emigration at the end of the nineteenth century, the type of steamships destined for the transportation of migrants from Naples to New York, the life on board including epidemic diseases and shipwrecks, hundreds of photos published in emigration books and museums, immigrant letters, publications, fatal attempts to enter America, articles in New York newspapers about the mass of desperate, despised people, the conditions of life and work of the new Southern emigrants, their daily life in Little Italy or in Mulberry Street, boxers’ gyms, guest-houses...

A.: Certainly! The character of narrative invention must be not only credible, but also trustworthy. In each of their smallest details: how they are dressed, how they speak, what they say, how they work, curse or pray. If you make a mistake, for example, in describing a work tool non existent at the time, the character becomes ridiculous, as if in a costume drama scene where an ancient Roman senator wears a wristwatch! It happened!

Q.: Francis, the Bourbon soldier, who remained faithful to his king, Uncle Tom, the black boxing impresario and the cook from Abruzzo, Fulgenzio, are invented characters! And they seem more realistic than historical characters!

A.: This is a compliment, because the reader in the end, if the process of invention and identification is successful, should no longer be able to distinguish one from the other! The logic of relationships must be tight, as if it really happened! Narrative fiction stories feed on true stories and vice versa. The novel, therefore, as a literary genre, as one of the greatest literary genres, becomes a narrative fiction extending in prose, in which characters, space and time are fundamental elements, even if indeterminate. My historical education always requires precise identification of historical scenarios, the backgrounds for narrative and individual events, as well as the “great” historical events which intertwine with the “small” events of the protagonists. From the universal to the particular. From the particular to the universal. All commentators recognize this Manzonian ascendancy. I am not only claiming it, but I am proud of it. The Bourbon soldier allows me to open the eyes of Alfonso Costanzo on the Unification of Italy, on the drama of the Bourbon army, on the defeated of History. Uncle Tom offers me a chance to describe a contiguous environment of the American underworld, the future Mafia, from which the young man is saved by virtue of his uncle and his honest and incorruptible boss. Fulgenzio, on the other hand, becomes the fundamental juncture of his American experience, because he opens his way to the kitchen and to the invention of the strascinati.

Q.: A final word on Gennaro Stoiber, an invented character that fascinated me up to his first name and last name, the musical impresario of Piedigrotra, a friend of Salvatore Di Giacomo, Roberto Bracco and Francesco Cilea, who takes them by car from Agerola to Sant’Agata sui Due Golfi to discover the district of Massa and the cuisine of Pensione Iaccarino!

A.: No music impresario of the Piedigrottesque era could serve as a narrative fusion between the three characters who stayed in Agerola, who also fell in love with Sant’Agata. In the beginning I thought of Baron Ferdinando Bideri, founder of the music publishing house, nine years older than Di Giacomo, and in excellent relationship with the poet. However, I would have had to force his character. I created Don Gennaro Stoiber with a brush, with the Neapolitan name of his grandfather and the German Teutonic surname of his father, a merchant, in love with a starlet of café chantant, with whom he has a relationship and a son. A lover of beautiful women and fast cars, a disciple of the futurist current, an exemplary husband and father, as well as a Piedigrottesque pimp, with a touch of Nordic rigour. I find him fascinating and credible. We will see what the readers think of him. 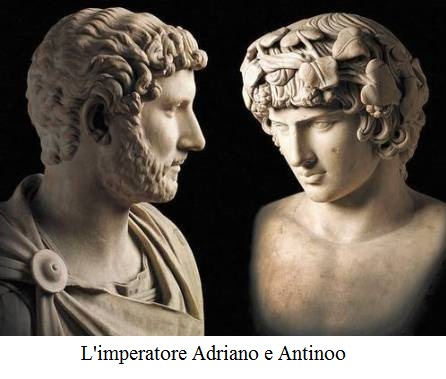 Q.: You should not, however, abandon the theatre, the dramaturgy! Your dialogues in the novel prove it! You started with the beautiful radio tragedy “The Death of Antinoo” and then you stopped, occupied with other things, so many, too many...

A.: I couldn’t agree more! I cannot resist the immediate! I promise you, however, that if you are going to stage my Antinoo, the young slave loved by the great Emperor Hadrian, I will return to writing for the theatre. For you!

Q.: A promise is a debt! On the other hand, when me and Enzo Giammarino as young non-professional theatre actors put on a stage the “Fine” show at the Cloister of St. Francis in Sorrento, in the end you first praised me as a protagonist, then you suggested to practice my voice and to study in the great theatre schools, with the great maestros! I felt a strong need to improve my training and your observation inspired me.

A.: And then you left the province for Paris and then for Rome? Do I remember it well?

Q.: Two years later I was at the Conservatoire d'Art Dramatique du Luxembourg in Paris and, a few years later, at the National Academy of Dramatic Art “Silvio D'Amico” in Rome. You remember it well, Professor!. 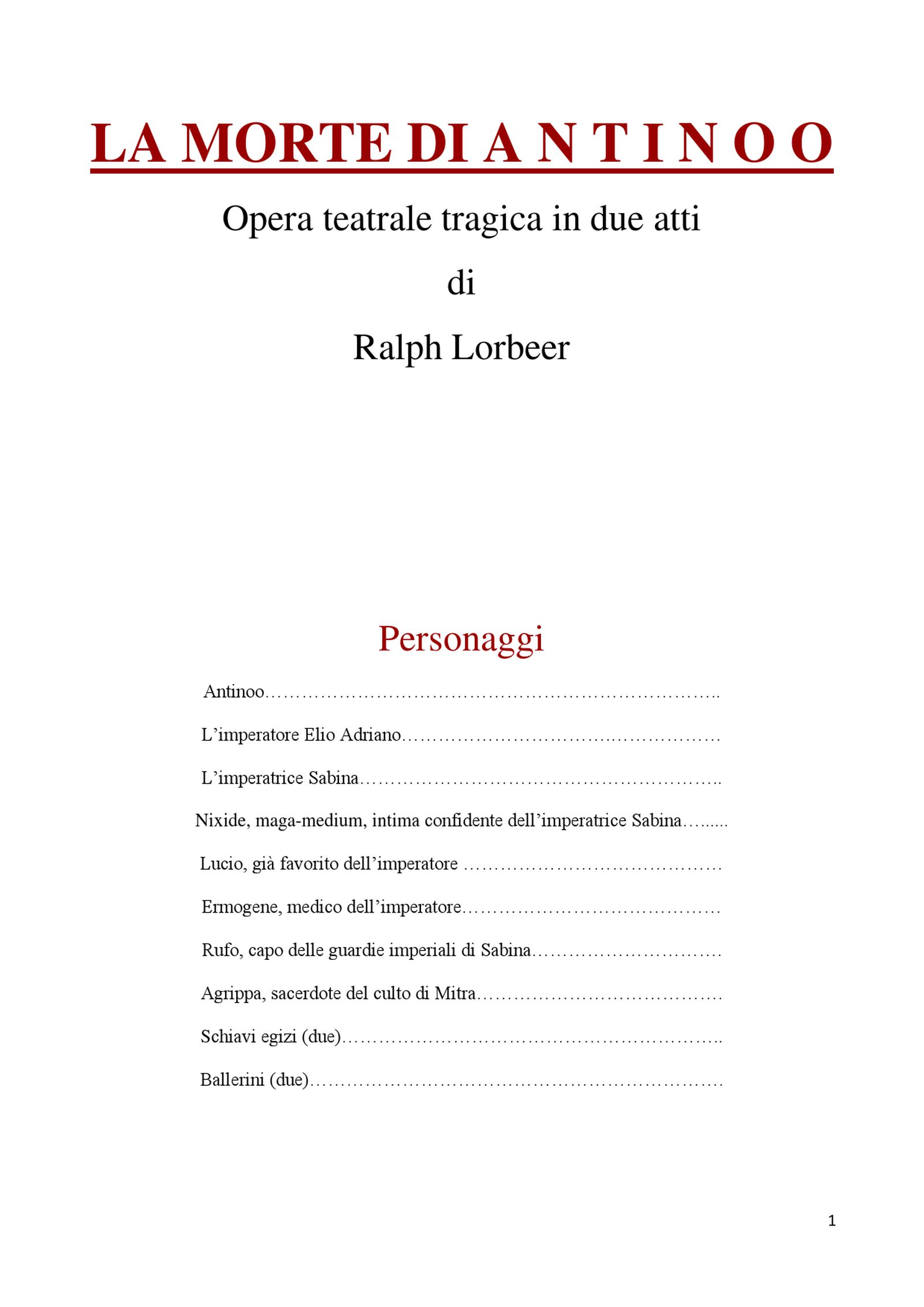