“DON ALFONSO 1890 - SALVATORE DI GIACOMO AND SANT’AGATA SUI DUE GOLFI”. THE NOVEL BY RAFFAELE LAURO CONTAINS A GALLERY OF FEMALE POSITIVE FIGURES WHO ENRICH THE NARRATIVE TEXTURE OF THE WORK AND SEEM TO CONFIRM THE PROPHETIC WISH OF THE AUTHOR ON THE DETERMINING ROLE OF WOMAN IN THE FUTURE OF THE WORLD

Who wishes to carry out in the future the critical analysis of Raffaele Lauro’s narrative work, happily and steadily arriving at the sixteenth text with this new novel entitled “Don Alfonso 1890 - Salvatore Di Giacomo and Sant’Agata sui Due Golfi”, coming out at the end of June, they will not be able to escape from dedicating a whole chapter to female characters, always described with great respect and deference, I dare say, with devotion. On the other hand, Lauro has never been secretive about it, also in his public speeches, for years, through apparent jokes which were in fact substantive judgements that women will “save the world” and that they are a remedy to historical mistakes committed by men due to their blindness, their libido of power, their greed of riches and their delirium of omnipotence. His pages always depict strong, courageous women, whatever social role they are in, determined and sensitive, whether they are housewives or entrepreneurs, wives, mothers, life partners, friends or lovers. Lauro expresses his deep admiration for his grandmothers: the maternal one, Donna Peppinella De Simone, widow of Aiello, head of the family farm, and the paternal one, Donna Maddalena Russo, who became a widow at young age, as her husband died in The First World War, and left with three orphans she rolled up her sleeves and devoted herself to working as a tailor to push forward with courage, independence and dignity. One can sense a total admiration for his mother Angela, to whom he posthumously dedicated the two volumes of “Quel film mai girato”, a narrative work that fascinated Lucio Dalla and that film critic Gianluigi Rondi called in a public presentation in Rome “a book that every son should want to write about their mother”. One can sense his sincere Christian devotion to Mary, Mother of Mercy and Mother of God, the Bridge of Peace between Christianity and Islam, as he has recently stated in a public lecture. This novel also contains a gallery of female positive figures which enrich the narrative texture of the work and seem to confirm the prophetic wish of the writer on the determining role of woman in the future of the world. I asked him to talk to me, like in the past, on this non-secondary aspect of his poetic world. As always, the professor does not withdraw and responds to my provocations without a safety net.

Q.: Why, in your narrative work, do you attribute such an important, absolute, indispensable and irreplaceable role to the female figure?

A.: Because the female figure plays it objectively in historical reality and in the life of each of us. It does not, therefore, constitute my own invention or mere conviction. We may also not have a wife or we may not be a father of a daughter, but we cannot not be a mother’s son.

A.: I am the most open to the recognition of constitutional rights of all citizens and I have shown that as a parliamentarian of the Republic with my proposals of laws, without discriminating between citizens of class A and class B, but to deprive a child by law of maternal figure, be it a natural mother or a mother who adopted them, seems to me an intolerable violence, an expression of selfishness rather than love. Even if an impersonal robot, a result of scientific progress (for me a setback in this case!), becomes capable of conceiving, carrying and giving birth to a child, I will not change my approach. The relationship between mother and child feeds on an interaction of feelings, values and consonances which cannot be replicated scientifically. You should ask an orphan who lost their mother or someone who did not know their mother due to unfavourable circumstances, what they missed. 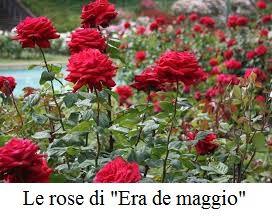 Q.: In this novel, as in the previous ones, the female figure reigns supreme, starting from the mother of the protagonist, Don Alfonso Costanzo Iaccarino, Donna Maria Rosa Persico, married to Luigi Iaccarino, called Rosa by everyone. Rosa will also be the name of the wife of the founder of the Iaccarino dynasty, who will give him eleven children! The emotional and fragrant combination between the roses (mother and wife) of Don Alfonso Costanzo’s life with the roses (flowers) of the song loved by him, “Era de maggio”, the masterpiece by Salvatore Di Giacomo and Pasquale Mario Costa, is in my opinion simply delightful.

Q.: A tenacious, strong and determined woman who refuses the compromise of a second marriage in order to raise her child alone, even at the cost of making great sacrifices, working, renting rooms in the summer, not to ask for help from others.

A.: Who breaks under the painful circumstance of her fourteen-year-old son leaving for America in the certainty that Alfonsino would return to resume the journey to make their dream come true: a guest house bearing the surname of Iaccarino. Likewise, his wife, who in addition to giving him eleven children collaborates with him ubiquitous and discreet in managing the affairs, first alone, and then with their children as they grow up: girls in the housekeeping department, men in general management, catering, kitchen, cellar and dining room.

Q.: The daughters aren’t no different either.

A.: If Olga and Maria devote themselves to their families, Laura and Anna appear to be the most tenacious in wanting to continue their fatherly activity by following their own ways. I have had the privilege of meeting the professionally active Mrs. Laura Iaccarino, married to Angelo Foddai, both Managers of the Albergo Europa Palace hotel in Sorrento. As a student-worker, for three summers, as a young man I was a concierge boy in that great hotel under the guidance of the unforgettable concierge, Carmine Buonagura. I was struck by the energy and determination of the “hostess”, always on the move, between floors, salons, laundry and kitchens. An unforgettable woman. Without these women, mothers and wives of hoteliers, valuable business associates, our tourism history would have been different.

Q.: From the famous grandfather to his even more famous grandson. There is also a fundamental female figure at his side.

A.: Livia Adario, his girlfriend, his fiancée, his wife, his main collaborator, his children’s mother. A pillar! Indeed, the pillar, as defined by Don Alfonso. Alfonso and Livia are co-essential, inseparable. Everything they did and conquered, they did and conquered together, challenging conventional wisdom, having the courage to choose together, to study together, to travel together, to observe and learn together from the experience of others, preserving tradition without renouncing innovation, keeping their feet on the ground, not forgetting to dream like two visionaries, like two creators, able to discuss, fight, confront and sometimes even make mistakes, always together.

Q.: Like in monarchies, is their dynasty succession ensured?

A.: Ernesto inherited the creative virtues of his father, putting them immediately to good use in the kitchen. Mario inherited the organizing skills of mother, practising them daily on the floor. The fourth generation of the Iaccarino appears ready on the launch ramp, knowing that the reigning couple of the Italian high cuisine will still have a lot to create and organize. Their human, professional and sentimental fairytale continues. Livia remains the sacred custodian of the Don Alfonso 1890 super wine cellar. A kingdom within a kingdom.

We truly wish them all the best!