SALVATORE DI GIACOMO. PLACES OF THE SOUL OF THE GREAT NEAPOLITAN POET, AGEROLA AND SANT’AGATA SUI DUE GOLFI, TRIUMPH IN THE NEW NOVEL OF THE SORRENTINE WRITER RAFFAELE LAURO, “DON ALFONSO 1890 - SALVATORE DI GIACOMO AND SANT’AGATA SUI DUE GOLFI”. HISTORY, NATURAL BEAUTY, COLOURS, FRAGRANCES, SENSATIONS, NOT ONLY VISUAL PERCEPTIONS, FAMILY MEMORIES, VOICES FROM THE PAST AND INTENSE MOMENTS OF COMMUNITY LIFE 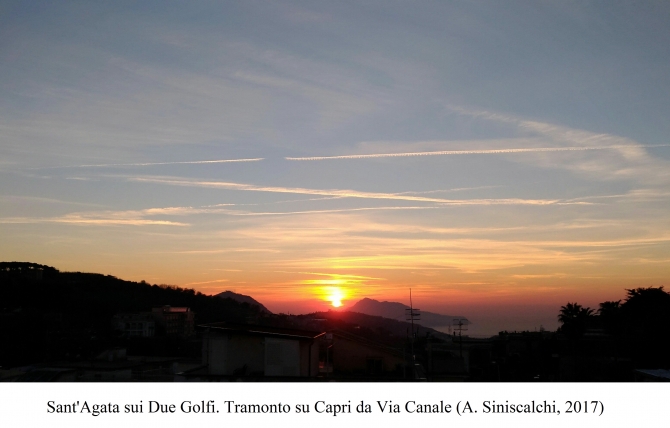 The main locations of the new novel by Raffaele Lauro, “Don Alfonso 1890 - Salvatore Di Giacomo and Sant’Agata sui Due Golfi”, published by GoldenGate Edizioni of Rome, stretch from the Lattari Mountains to Punta della Campanella, from Bagni dello Scrajo of Vico Equense to Piazza Tasso of Sorrento, from the port of Naples to the port of New York, from Little Italy to Staten Island, from Monte San Costanzo to the little fiord of Crapolla. The narrative stories of the great Neapolitan poet Salvatore Di Giacomo and of Don Alfonso Costanzo Iaccarino, owner of Pensione Iaccarino, a hotel-restaurant opened in 1890, develop between the two fundamental poles, Agerola and Sant’Agata sui Due Golfi. The two locations much beloved by Di Giacomo, one at the foot of the mountains and the other one among the hills. Climatic places both favoured by the wealthiest Neapolitans where in the summer one could breathe fresh, salutary, strengthening,“mbarzamato”air. One could eat genuine food and at every hour of day or night, under the sun or under the moonlight, they enjoyed breathtaking views from the natural balconies overlooking the Amalfi Coast (Agerola) or the two gulfs, of Naples and Salerno (from Sant’Agata sui Due Golfi). The Author’s, for me the Prof, always film-like writing more of a screenwriter than a novelist evocatively offers to the reader history, natural beauty, colours, fragrances, sensations and not only visual perceptions linked in particular, for those born in one of these two villages, with childhood memories, family memories, smells of ancient food, country festivals, voices of the past, and intense moments of community life in these lands blessed by God, such as harvest, picking lemon apples and late-cherry festival. As a person from Sant’Agata, in love with my village, I’ve recognised, found myself and was moved in the pages dedicated by Lauro to Sant’Agata sui Due Golfi. Without surrendering to sentimentalism, I must confess that my heart often skipped and memory overwhelmed me. Thank you, Prof! With these sentiments of gratitude as a person from Sant’Agata I asked him a few questions.

D.: From Agerola to Sant’Agata sui Due Golfi, the two summer holiday poles of Salvatore Di Giacomo. So the great Neapolitan poet abandoned the submontane town for that on the hilltop, for my village? Did he betray Agerola?

R.: Not at all, not betrayal, rather a “double” falling in love. Di Giacomo, at the end of the nineteenth century, as did playwright Roberto Bracco and composer Francesco Cilea, liked to stay for long summer periods in Agerola to escape the hot Neapolitan weather, like many other personalities in the political, cultural and musical world of Naples. Such as, among others, Benedetto Croce. He was literally captured by the Agerola moon, the new moon, to which he dedicated many famous verses that later on were turned into music. Agerola, therefore, since the end of the nineteenth century and also in the early twentieth century had become a coveted goal. Everyone in Naples was looking for freshness, tranquillity, calmness, simple eating, moments of relaxation and reflection, a place to conceive and write their works. Until 1908 Agerola was the only place of the soul of Don Salvatore.

D.: What did Di Giacomo love about Agerola as a destination of his stays?

R.: He liked everything about Agerola, also the discreet hospitality of its inhabitants, but in particular the heavily oxygenated air that descended like a breeze from about 1400 meters in the mountains and the marine air, rich in Iodine, which rose as a breeze to about 800 meters from the expanse of the sea. Both breezes mixed with the aromas of diffused herbs and flowering plants. He usually stayed in a hotel in a district of San Lazzaro, the most scenic and panoramic of all, which ran up to the belvedere overhanging the sea, a true source of inspiration. But he visited also other villages, the old houses, the authentic gemstones of the Agerolian crown: the flat Pianillo, the populous Bomerano, the rural Campora, the strategic Ponte, in addition to the panoramic San Lazzaro.

D.: After that, Di Giacomo discovered Sant’Agata sui Due Golfi and began to visit our village from 1909 to 1930, for about twenty-one years! How did the fatal encounter take place?

R.: I placed it, by process of elimination, in the summer of 1908. The culprit was a lunch at Pensione Iacarino at the end of August. Even more of a culprit was the reception and hospitality he and his friends, Bracco and Cilea, were offered by Don Alfonso Costanzo Iaccarino, whose high quality cuisine had been heard of in Naples in Piedigrotta’s environment. Di Giacomo was a high cuisine enthusiast, passionate about good food. It was love at first sight! Not only in gastronomic terms, but of elective affinities, of human fondness and affectionate correspondence. In addition, the thirty-six-year-old hotelier and restaurateur of Sant’Agata was a fan of songs written by Di Giacomo, starting with his masterpiece, “Era de maggio”, which the young tenor Enrico Caruso sung live in the guest house dining room.

D.: Did Di Giacomo also fall in love with the natural beauty of Sant’Agata and Massa Lubrense, or only with Don Alfonso Costanzo Iaccarino’s cuisine?

R.: I can say that firstly he fell in love with the cuisine, and then with the nature of Sant’Agata and Massa. He discovered it the following year, when he chose the village for a short trial stay. Thus, as in Agerola, also in Sant’Agata he enjoyed the same fragrant breezes, the same regenerating air, the same enchanting panoramas, especially of the two bays, the same new moon, the same oaks, the same courtesy of people, tranquility, peace, as well as fresh water springs of Fonte di Canale, Deserto, Santa Maria della Neve. In addition, he benefited from Don Alfonso Costanzo Iaccarino’s friendship and organizational support, the guest house, the restaurant and Mediterranean cuisine with antique flavours. And lobsters brought by the fishermen of Crapolla to his delight! From that moment he had never left Sant’Agata sui Due Golfi. He went back there for twenty one years, until that unfortunate summer of 1930, when he was hit by a terrible semi-paralysing attack of uricemia and was forced to abandon the beloved village in an ambulance which came from Naples to take him to hospital.

D.: Was this the farewell of Di Giacomo with Sant’Agata?

R.: He couldn’t go back there for two reasons. His health condition worsened, he no longer left home, his last home, in 35 San Pasquale in Chiaia Street until his death in 1934. His economic conditions became more and more precarious as he was no longer able to write. As I found out, the memories of his stays at Agerola and Sant’Agata sui Due Golfi comforted him.

D.: Among all the places in Sant’Agata that you described in the novel of great narrative power I found the description of the first walk of Don Salvatore and Don Alfonso Costanzo to Fonte di Canale. Maybe because I experienced it in the same way with my family.

R.: Via Canale is the narrative “heart” of the novel. This is where the parents of Don Alfonso Costanzo, Luigi and (Maria) Rosa were born. There future restaurateur was born there and he lived there until the age of about fourteen, when he emigrated to America and, in terrible moments of nostalgia overseas, he recalled playing games with his friends at Fonte di Canale. Don Salvatore comes down with his famous Kodak and photographs the laundresses that stand up with tubs stuffed with washed clothes on their heads to stretch them in the sun, some of them with babies in their arms. An exciting scene, also because it focuses on all the human and professional story of Salvatore di Giacomo: crime reporter, journalist, photographer of the Vomero laundresses and of the former Naples, which disappeared under the blows of the post Cholera recovery, an intellectual, a librarian, a lover of nature and beauty. 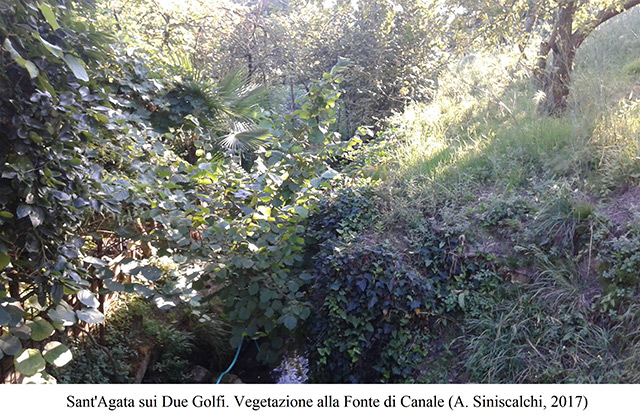 D.: Sublime, then, was the singing of the laundresses rising from Fonte di Canale, which first astonishes and then emotionally involves both the Neapolitan poet and the restaurateur from Sant’Agata. A very intense moment!

R.: The washbasin near the spring source had been one of the few places of female socialising since the early nineteenth century. Socialising expressed by ancient popular songs. Popular culture. Songs of protest against foreign occupation. I have also discovered Di Giacomo’s passion for photography of the laundresses of Vomero. These elements contributed to a tribute not only to the great poet, but to the very origins of the oldest Neapolitan song. Jesce sole, jesce sole! And to maestro Roberto De Simone and his wonderful “Gatta Cenerentola”.

R.: Monte San Costanzo is the highest exaltation of the extraordinary nature of our land. There is no place or point of observation in the world, which is the same, from which one can admire such beauty together, by turning around three hundred and sixty degrees. The Lattari Mountains, the two coasts, the two gulfs, Capri, Ischia, Procida, the Phlegrean Fields, Vesuvius, Li Galli... the sea, the sky… the Sirens… 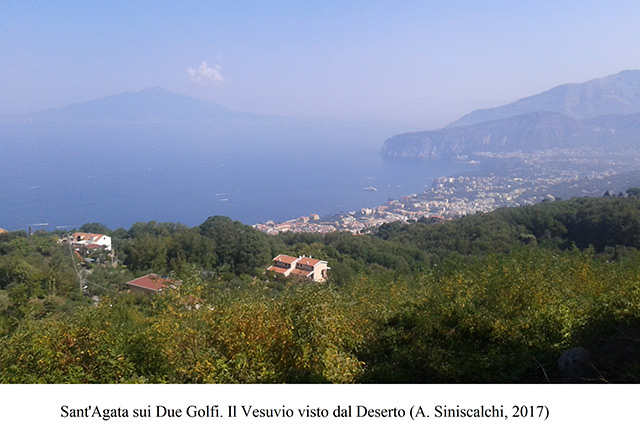 D.: When I go on Monte San Costanzo I lose contact with reality...

R.: I believe you. A profane and sacred temple, an expression of the classic myth and of Christian religious devotion, the supreme synthesis of our history, traditions and events, also the tragic ones, that have affected the ancient and recent inhabitants of the Siren Land for centuries.

D.: If someone could exhale their last breath from Monte San Costanzo with the light of dawn or sunset in their eyes, the transition would be... would be...

R.: The antechamber of Paradise?