Sei qui: Home » News archive » DON ALFONSO 1890. IN THE NEW NOVEL BY RAFFAELE LAURO DEDICATED TO THE FAMOUS STARRED RESTAURANT IN SANT’AGATA SUI DUE GOLFI, THE[...]

DON ALFONSO 1890. IN THE NEW NOVEL BY RAFFAELE LAURO DEDICATED TO THE FAMOUS STARRED RESTAURANT IN SANT’AGATA SUI DUE GOLFI, THE ENTREPRENEURIAL AND FAMILY SAGA OF THE IACCARINO “DYNASTY” FROM THE END OF THE 19TH CENTURY UNTIL TODAY, IN THE FIELDS OF HOSPITALITY AND CATERING OF EXCELLENCE 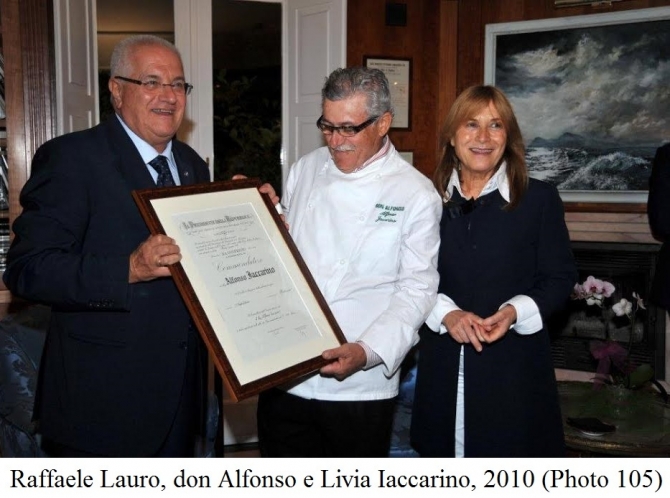 The new novel by the Sorrentie writer Raffaele Lauro, “Don Alfonso 1890 - Salvatore Di Giacomo and Sant’Agata sui Due Golfi”, published by GoldenGate Edizioni of Rome, coming out at the end of June, celebrates the family and entrepreneurial saga of the Iaccarino “dynasty” from the middle of the nineteenth century to today through four generations operating successfully in the field of quality hotel hospitality and catering of excellence. The story begins in 1872, in Sant’Agata sui Due Golfi, with the birth of the founder, Alfonso Costanzo Iaccarino, whose human, family and entrepreneurial story intertwines intimately with the social and economic development of the hilly village on the Sorrentine Peninsula and, in the second post-war period, with the political-administrative life of Massa Lubrense. We spoke about this with the Author, closely attached to Sant’Agata sui Due Golfi, to the grandson of the founder, Don Alfonso Iaccarino, and his wife Livia.

D.: You said that the figure of the founder of Iaccarino “dynasty”, Alfonso Costanzo, fascinated you, kidnapped you. In what sense? Can you be more clear for the readers of the new novel, “Don Alfonso 1890 - Salvatore Di Giacomo and Sant’Agata sui Due Golfi”?

R.: My original intent was only to show that Don Alfonso Iaccarino, the grandson, unlike many other starred chefs of international fame, did not arrived to global success from nothing, that is without having a solid story behind, a family history in gastronomic field and Mediterranean cuisine, his flagship, where he established himself as a true master for many generations worldwide. From the reading of books on Don Alfonso, the references to this authoritative ancestry, his origins, were almost fleeting with generic references to the human, family and entrepreneurial events of his grandfather, the invention of the “strascinati” pasta and a set of temporal data on his life, completely contradictory, if not incorrect. Then, with the determining help of my friends from Sant’Agata and Massa, I decided to do a research in the registry and the municipal archive in order to reconstruct, first of all, a certain historical picture. There is still some doubt, but not such to undermine the extraordinary nature of the story. Subsequent conversations with Don Alfonso and Livia Iaccarino opened to me the sources of inspiration and narrative insights, worthy of the utmost care and further deepening. In particular, the work of Alfonso Costanzo as a child, after he lost his father, the departure at the age of about fourteen as a small emigrant from southern Italy, to “La Merika”, seeking employment, occupations in New York to gather savings, the return after four years, at the age of eighteen, and the start of his business with the opening of Pensione Iaccarino in partnership with a German lender, Max Brandemaier, originally from Stuttgart and in love with the village.

D.: Let’s start from the historical picture to clarify what parts of the novel faithfully respect reality, the result of documentation or testimonies, and what belongs to fictional invention, though probable, of Manzonian inspiration, typical of biographical novels.

R.: The construction of all the dialogues of Don Alfonso Costanzo Iaccarino with his interlocutors is surely the result of narrative invention, also because it is linked to non-historical characters, who are also invented. However, I would like to clarify that, being very fascinated by Don Alfonso Costanzo’s figure, I immersed myself psychologically, sociologically and culturally into the character, therefore the thoughts, projects, reflections, events and observations are absolutely adherent to his personality.

D.: Let’s come back to the historical picture.

R.: Alfonso Costanzo Iaccarino was born on August 16, 1872, in the family house in via Canale, the narrow street that descends from the main avenue of Sant’Agata sui Due Golfi, the high street of the village, between the Church of Santa Maria delle Grazie and La Pedara to Fonte di Canale. His parents, Luigi Iaccarino, a bricklayer born in 1840, and Maria Rosa Persico, a housewife born in 1841, came from modest working families living on the same street. For this reason, Luigi and Rosa had known each other since they were kids. They had one son to whom they gave two names, Costanzo and Alfonso, even though since his childhood everyone used a diminutive, “Alfonsino”. The key dramatic event is Luigi’s premature death and the firm will of the young widow not to remarry, to devote herself completely to her son. The woman starts her business of renting the two rooms of her own home to summer guests from Naples and of offering cleaning and cooking services for them, with the experience gained in the small family trattoria, the Trattoria dei Persico in via Canale. In the moment of pain and difficulty, unresolved with a shortcut of a new marriage, a compromise solution, the relationship between a son and a mother is cemented, from which Alfonsino inherits a strong and determined character. This determination prompts him to find a job without telling his mother about it, a job to get a few pennies to help her out: he would go every day before dawn to Crapolla to pick up fresh fish to be delivered early to the fishmongers of Sorrento along the Circumpiso, an unpaved and rugged path connecting Sant’Agata with Sorrento on foot.

D.: Why did he decide to leave as an emigrant for America, looking for work, and why did his mother allow it?

R.: Alfonsino, besides being like his mother, strong in character, is a true visionary, a dreamer. He wants to break the vicious cycle of poverty, wants to save up, and wants to get involved for himself, for his mother Rosa and for his native village. He has to emigrate but ... but ... to come back as soon as it’s needed. His mother is very upset, she knows she will stay alone, but she is sure her son will return. That he will not betray their secret pact, reassured by the fact that a relative, Aunt Carolina, with her husband Luigi, called Parapalle, has already emigrated to New York and will protect her son from all dangers.

D.: How many years will he spend in America?

R.: About four years, he changes trades (the incredible American epic of Alfonso Costanzo, I leave it to the readers!), he accumulates savings and decides to come back, he finds a reliable German partner and opens Pensione Iaccarino at the beginning of the Circumpiso. From that moment on the citizens from Sant’Agata, despite his young age, will no longer call him “Alfonsino”, but “Don Alfonso”. A guest house, with few rooms but with a restaurant that soon becomes very popular. He marries a girl from Sant’Agata, Rosa d’Esposito, eight years younger than him, who works with him and with whom he has eleven children: Olga (1899), Fernanda (1901), Maria (1902), Luigi (1904), Ernesto (1906), Guglielmo (1908), Carlo (1910), Vladimiro (1912), Laura (1914), Anna (1916) and Renato (1920). Vladimino (1912) dies at a very young age and Fernanda (1923) and then Guglielmo (1928) die as youngsters. As the surviving children grow up, they work with their father and mother, who will pass in 1925, in the hotel: women in the rooms department, men in the management of other services, from kitchen to floor. Thus, Pensione Iaccarino, year after year, grows and grows and becomes a fully respectful hotel company, not so much, however, to feed so many children who are now ready for marriage. The first expansion attempt begins and fails dramatically. Three children, Carlo, Laura and Renato, open a second Iaccarino Guest House in Rome, hoping to create a parallel, but not seasonal, company. The World War II war events, linked to the fall of the Fascist regime and Rome, an open city, will suck this initiative into the vortex of civil war, with entirely unfounded accusations addressed to the Iaccarino brothers of collusion with Nazi-fascist criminal gangs.

D.: Did this situation generate a lot of bitterness in Don Alfonso Costanzo?

R.: Obviously, first anguish for the fate of his children and then bitterness, also because the allies had taken over his creation, Pension Iaccarino. Eventually, the children returned safe and the allegations were debunked in front of historical and procedural truth. However, it was clear to him that there was a need to divide the heritage among potential heirs. According to the practices (now incomprehensible!) of the time, the females received property and money. The males received the hotel business, even though each of them had begun to think largely about their future and about the future of their own families. In June 1952, the now legendary founder had the pleasure of seeing his son Luigi elected Mayor of Massa Lubrense, an election confirming the deep bond of the Iaccarino family with Sant’Agata and Massa Lubrense. Before and especially after the founder’s death, on 4th August 1952, a few days before his eightieth birthday, among divisions and successions, the second generation of the Iaccarino family of Sant’Agata sui Due Golfi expanded after WWII towards Sorrento and towards Rome. Carlo continued the Roman project with the opening of several hotels. The firstborn Luigi and the last-born Renato bought the Imperial Hôtel Tramontano. They built the Grand Hôtel Hermitage. Laura and her husband, Angelo Foddai, began managing the Europa Palace in Sorrento. Anna did not want to leave the hotel business and opened the Albergo delle Palme in Sant’Agata. Ernesto, father of Don Alfonso, inherited Pensione Iaccarino and from there started the third generation’s journey. The path of Don Alfonso jr., to whom his grandfather had ideally passed the heritage of Mediterranean cuisine before dying.

D.: Was it a walk of a couple, that of Don Alfonso, not solitary?

R.: Precisely. If the grandfather was a visionary, the grandson was even more of a visionary. He married a beautiful girl from Sant’Agata, Livia, also a visionary like him, who supported him in all his brave projects. The two travelled first to Europe and the East, and then, challenging old preconceptions, also of their family members, they opened Don Alfonso 1890 inherited from an American aunt, sold the family hotel and devoted entirely to high-class cuisine, achieving results and receiving awards, as we all know. They bought and cultivated the Le Peracciole estate, which was complementary to their gastronomic philosophy. For this reason, the restaurant Don Alfonso 1890 is today judged according to customer’s preferences as the fifth in the world and Don Alfonso as one of the most renowned chefs, branching out among restaurants and consulting worldwide. A national glory and Italian excellence, as Carlo Azeglio Ciampi said.

D.: And the future of the Iaccarino “dynasty”?

R.: Do not rest on laurels, repeats don Alfonso. The hotels of the Iaccarino galaxy are brilliantly managed by the third generation, by the sons of Luigi, Renato, Ernesto and Anna, pending the fourth generation. Don Alfonso 1890 is already firmly in the hands of the sons of Alfonso and Livia: Ernesto, brilliant in the kitchen and already famous, and Mario, brilliant on the floor, lovingly followed by their parents.

D.: Then is not it true that the third generation always destroys what the first and the second have built? Thomas Mann and the Buddenbrooks?

R.: Not always. Generational decay in family economic empires does not seem to affect the Iaccarinos from Sant’Agata sui Due Golfi. 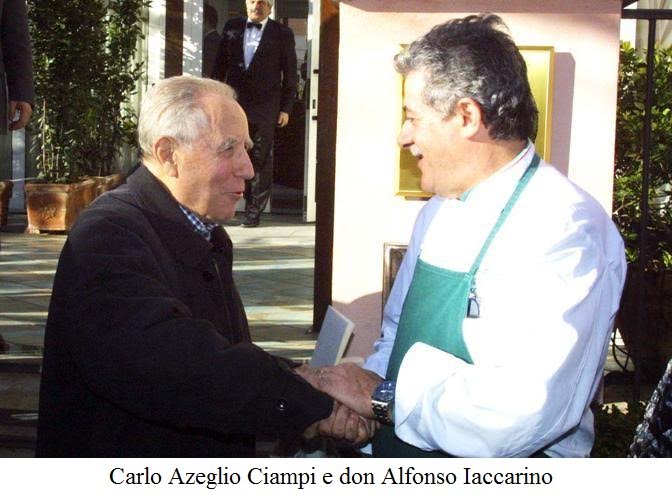