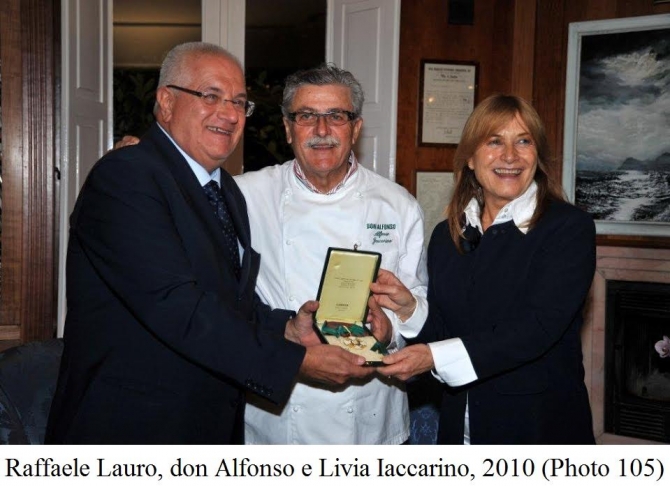 Out of the new novel by Raffaele Lauro, emerges in an organic, almost didascalic way, the gastronomic philosophy of a Chef from Sant’Agata, Don Alfonso Iaccarino, considered universally one of the “Maestros” of Mediterranean cuisine worldwide. A book, therefore, that should be studied in culinary schools. Like all the previous works of Lauro, the latter also lends itself to different levels of reading: the consecration of the “Siren Land” from Monti Lattari to Punta Campanella, in the mythological spirit of Norman Douglas; the celebration of the emotional bond of the great Neapolitan poet Salvatore Di Giacomo, first with Agerola, then with Sant’Agata sui Due Golfi, where he stayed during the hot months from 1909 to 1930; the reconstruction of the golden age of classic Neapolitan song, which Lauro identifies in the masterpiece of Di Giacomo, “Era de maggio”; the  human and family tragedy of the massive southern migration, also of the minors, to the Americas in search of work at the turn of the nineteenth and twentieth century; the human, family and entrepreneurial epic of Don Alfonso Costanzo Iaccarino, linked with the economic and social development of Sant’Agata sui Due Golfi as a place of holiday stays due to its climate. The central theme, however, focuses on Mediterranean cuisine, of great interest in terms of culture and economy of the Sorrentine Peninsula, on the eve of Easter, with the start of the 2017 tourist season.

D.: Let’s begin with two general questions. After “The Sorrentine Trilogy”, including a historical novel and two biographical novels, dedicated to Lucio Dalla and Violetta Elvin, should we expect, by chance, a “gastronomic trilogy” dedicated to the restaurants and the multi starred chefs of the Sorrentine Peninsula?

R.: I would be highly honoured to pay a narrative homage to all the founders of numerous hotel and catering dynasties, which have flourished in our coast from Massa Lubrense to Vico Equense for more than a century and a half. However, neither a trilogy, let alone a lifetime would be enough. I open a road, others will follow. In any case, I can anticipate as of now that the second gastronomic novel, as you call them, will be released in 2018 and will be dedicated to don Peppino Manniello, his sons, Tonino, Mario and Enzo, and their famous restaurant ’O Parrucchiano, an international glory of Sorrento.

R.: I will only be spoiled for choice!

D.: What were your selection criteria? Why these two restaurants, these two dynasties, the Iaccarino and the Manniello, and not others?

R.: I use objective criteria and subjective criteria. The Don Alfonso 1890 is judged today, beyond the specialized ratings (and often conditioned by interests), as the world’s fifth restaurant of haute cuisine according to the satisfaction of customers. ’O Parrucchiano, an oasis of nature and traditional flavours in the heart of Sorrento, represents the national excellence of cuisine of Sorrento and Campania.

D.: And the subjective criteria?

R.: They are prevalent for me. I am much attached to the old feelings of esteem, friendship, family and personal admiration for Alfonso and Livia Iaccarino. Similarly, to the Manniello brothers. Also, I have known and truly respected Don Peppino Manniello. For goodness sake, there are at least another ten restaurants in the coast and as many starred chefs who deserve similar attention, but I do not know them closely. There would be no sentiment. You cannot write anything without the sentiment! You’d create promotional announcements.

D.: It is sentimental choices, then?

R.: “Predominantly” sentimental choices. I was fascinated, “kidnapped”, “taken” by the human, family and entrepreneurial story of Don Alfonso Costanzo Iaccarino, the founder, the grandfather of Don Alfonso. A life that becomes fiction, his life, a novel that becomes life. Four generations of the Iaccarino: from the founder to his son Ernesto, from his grandson Alfonso to the great-grandson Ernesto. As a historian, inspired by Croce, I always prefer metaphorical, symbolic stories, able to express generational transitions, links with the land of origin and cultural developments. From the particular to the universal.

D.: Thus, there is a close relationship between food and culture, between culinary and cultural evolutions?

R.: Cuisine is culture. The culture of people, before the culture of elite. The identity of people, the wisdom of people, the bond with the land and its natural products, the fruit of the experience of generations and also of a blend between different cultures. Don Alfonso builds his gastronomic philosophy on this principle!

D.: Is this also valid for haute cuisine, refined and inaccessible to most people?

C.: Also for haute cuisine, provided that this does not become an artificial superstructure detached from the land, presumptuously creative, regardless of the quality and flavours of natural ingredients. For this reason, Alfonso and Livia Iaccarino bought in 1990, at Punta Campanella, the estate called Le Peracciole, an uncultivated stone facing the most beautiful panorama of the world, transformed by them, with their sacrifices, with their tenacity, with their intelligence, into a fertile and fruitful farm!

D.: Is there a direct relationship between the crops from the farm and the Mediterranean cooking of Don Alfonso?

R.: In my conversations with Alfonso and Livia, I understood the importance of this report, almost a causal link, but I caught its scope only when visiting Le Peracciole and listening to Don Alfonso, when he illustrated its path, in lemon, olive groves, vegetable gardens, medicinal herbs and, why not ?, fragrant gardenia hedges to some British journalists. Le Peracciole are not just an agricultural property, where they grow basic ingredients for a natural and healthy cuisine such as the Mediterranean one, but they represent, as a place, the very identity of the culinary philosophy of Don Alfonso. A philosophy that not only preserves the past and tradition, but also introduces innovation, provided that the subject-base continues to be as genuine as possible, with the preservation of smells, fragrances and flavours.

D.: What is, then, the legacy of don Alfonso compared to his grandfather Alfonso Costanzo?

R.: From this point of view, there is no break of continuity between the fundamentals of the culinary philosophy of the grandfather and that of Don Alfonso. His grandfather bought gardens, vegetable gardens, orchards, bred pigs, cows and goats to offer to his customers at Pension Iaccarino excellent products, quality products. Only fish of first choice and lobsters came to the guest house and restaurant from the Crapolla fishermen. The rest, from wine to olive oil, from fruit to ham, from preserves to pickles, from conserves to jams, was all produced within the family business. Of course, Don Alfonso brought the trio of tradition-innovation-creativity to international level. The best definition of Don Alfonso and Livia’s revolution was given by the great food and wine entrepreneur, Gino Veronelli, their mentor: “Alfonso and Livia know that tradition is an essential platform on which to rest your feet, to make the leap forward, to make our new dishes and food safe and powerful, because they are created by their genius and their fantasy, in accordance with changes. The Sorrentine Peninsula has the privilege of the work of these two characters whom I truly love.”

D.: In the book, you refer to some famous recipes of the grandfather and of Don Alfonso.

R.: They couldn’t have been omitted, in relation to the preferences and tastes of famous characters hosted at Pension Iaccarino, such as poet Salvatore Di Giacomo. He, for example, loved quail with aromatic herbs baked inside a potato. Don Alfonso Costanzo knew all the tastes of his regular customers. I have reconstructed, among other things, the “true” story of the famous characters exalted in vernacular verse by the Sorrentine poet Saltovar, and beloved by the Austro-Scottish writer Norman Douglas. In terms of Don Alonso, I referred to the more congenial recipes for the flow of the narrative, and the many conversations preparatory to writing, which I had with Alfonso and Livia, without renouncing to draw from Alfonso’s cookbooks. The book is not a cookbook, but the history of the Iaccarino cuisine across four generations: grandfather Alfonso Costanzo, father Ernesto, Don Alfonso and his son Ernesto, who with his brother, Mario, will take over the Don Afonso 1890.

D.: Of all the ingredients, is there one that runs through the four generations of Iaccarino?

R.: There are many, it’s difficult to choose, but lemon has reigned supreme in desserts from grandfather to great-grandchild. The Lemon triumphs, the poetry of lemon, the lemon fragrance caught every day early in the morning in the garden of Le Peracciole. The Concert of Lemon. Or, rather, the Symphony of Lemon. Nature, mythology, music, painting and poetry, to the culinary ingenuity of Don Alfonso.

D.: Many starred chefs left, right and centre consider themselves to be either orchestra conductors or, in the worst-case scenario, dictators in the kitchen. According to you, where is Don Alfonso Iaccarino placed between these two poles?

R.: We spoke about this. He is not a media chef, devoted more to stay on television than in the kitchen, more in commercials than among the stoves. He is down to earth. He knows that success does not guarantee anything to anyone and that you cannot rest on laurels. He, in the kitchen, with his employees, while aware of the need for order and discipline, focuses more on authority than authoritarianism, more on mutual consideration among those who command and those who carry out than on peremptory orders.

D.: I read about how much the Iaccarino were gratified by President Carlo Azeglio Ciampi’s esteem and by the friendship with your brother Nello, who died in 2008.

R.: Carlo Azeglio Ciampi, both as governor of the Bank of Italy and as President of the Republic, was, along with his wife Franca, a loyal customer of Don Alfonso 1890. He always encouraged Don Alfonso, from the beginning, considering him an Italian excellence in the world. And he wasn’t wrong. The friendship of my mourned brother Nello with Alfonso and Livia is now part of our common family heritage. For this reason, the second part of my novel is occupied entirely by a dialogue between Nello and Alfonso, a synthesis of two extraordinary stories of two characters, who at the international level have paid and pay homage to their homeland, becoming “Maestros” for many successful students. The first one in the art of hospitality; the second one in Mediterranean cuisine and culinary creativity.

D.: When and where will the première of this new narrative effort take place?

R.: In the summer, and it will start its hopefully long journey from Sant’Agata sui Due Golfi and Agerola.