Sei qui: Home » News archive » HAUTE CUISINE. “DON ALFONSO 1890” IN SANT’AGATA SUI DUE GOLFI, THE FIRST RESTAURANT IN ITALY AND THE FIFTH RESTAURANT IN THE[...]

HAUTE CUISINE. “DON ALFONSO 1890” IN SANT’AGATA SUI DUE GOLFI, THE FIRST RESTAURANT IN ITALY AND THE FIFTH RESTAURANT IN THE WORLD PREFERRED BY THE CLIENTS. THE EPIC OF THE IACCARINO DYNASTY AND OF DON ALFONSO IN THE NEW BIOGRAPHICAL NOVEL BY RAFFAELE LAURO TO BE PUBLISHED IN JUNE 2017. 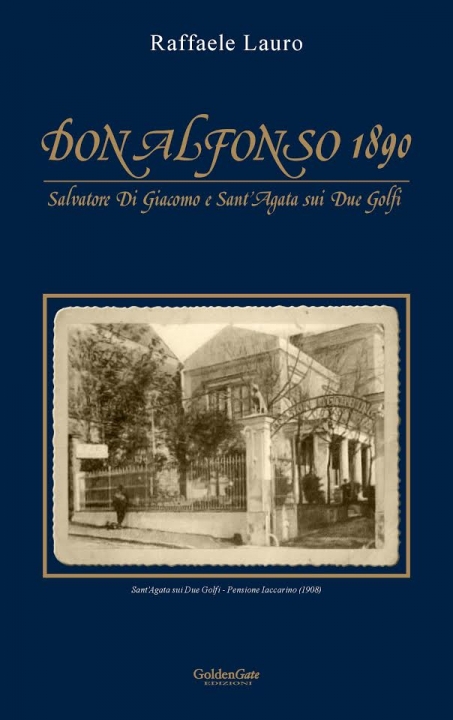 On the day when the national and international media and press report the news that the “Don Alfonso 1890” restaurant of Sant’Agata sui Due Golfi ranks first in the national ranking and fifth worldwide among restaurants offering fine cuisine chosen by customers, writer Raffaele Lauro announces that after an intense year he had accomplished and licensed his new narrative, literary and gastronomic work entitled “Don Alfonso 1890 - Salvatore Di Giacomo and Sant’Agata sui Due Golfi”, due out in June 2017. A 600-page long novel will be published by the GoldenGate Edizioni of Rome and consists of two volumes. The first volume tells the story of a human, family and entrepreneurial epic of Don Alfonso Costanzo Iaccarino, from his birth in 1872 to his passing in 1952, with the passing of the baton to his nephew Alfonso, son of Ernesto. From the loss of his father Luigi to his emigration at the age of thirteen to New York; from his American work experience to his return to Italy with the opening of Pensione Iaccarino; from the success of his restaurant-hotel to his collaboration with his child ren, who expand his business ventures in Sorrento and in Rome. The main theme of the first part is represented by the friendship between Don Alfonso and the great Neapolitan poet Salvatore Di Giacomo, who stayed in Sant’Agata sui Due Golfi in the summer of 1909-1930. Other significant historical characters, who occupy the stage in the first part of the novel, in addition to Di Giacomo, are: playwright Roberto Bracco, composer Francesco Cilea, tenor Enrico Caruso, writer Norman Douglas, scientist Antonio Meucci, philosopher Benedetto Croce, poet Gabriele D’Annunzio, eighteenth-century philosopher Giambattista della Porta, vernacular poet Saltovar, poet Torquato Tasso, historian Bartolommeo Capasso, playwright Edoardo Scarpetta, mayor-hotelier from Sorrento, Guglielmo Tramontano, mayor-hotelier from Massa Lubrense, Luigi Iaccarino, artist-brothers Giambattista and Ernesto De Curtis. In the second part entitled “Le Peracciole”, a symbol of the Mediterranean cuisine of Don Alfonso, the imaginary dialogue set in 2006 in the farm on Punta Campanella, held between don Alfonso Iaccarino jr. and hotel manager Aniello (Nello) Lauro, his great friend and admirer, reconstructs the human, gastronomic and entrepreneurial epic of Don Alfonso and his wife Livia, teamed with their children, Ernesto and Mario: from the initial insights to the first courageous choices, and step by step, from 1973 to 2017 up to the podium of the most prestigious restaurants in the world. The second part is filled with a crowd of historical figures from the worlds of politics, institutions, gastronomy, music and entertainment. Among them: President Francesco Cossiga, President Carlo Azeglio Ciampi, winemaker-gastronomy expert Luigi Veronelli, French singer Mireille Matthieu and the great artist from Bologna, friend of Alfonso and Livia, Lucio Dalla. “I am honoured to have devoted a year to research and writing of this book full of love for life, for nature, for beauty, for cooking and for art, the result of which becomes now for me very rewarding, as I hope it is for the absolute protagonists of the work, Alfonso and Livia Iaccarino, of whose fraternal friendship I am proud, as well as of their friendship with my brother Nello, who died in 2008. When I release the drafts waiting for the sovereign judgement of the readers, I feel duty bound to thank all who helped me in different ways: Alfonso and Livia Iaccarino, Carla Iaccarino, Luigi Poi, Diego Piroddi, Riccardo Piroddi, Donato Iaccarino, Stefano Ruocco, Antonino Siniscalchi, Mauro Siniscalchi, Salvatore Ferraro, Giovanni D’Esposito, Lello Ravenna, Luca Mascolo, tour operator Andrea Abate and Teresa Biagioli”.