Sei qui: Home » News archive » DALLA. THE TRIUMPHANT SUCCESS AT THE FAUNO NOTTE CLUB IN SORRENTO, CROWDED TO THE LAST PLACE, OF THE “A RAGAMUFFIN, A CLOWN” S[...]

DALLA. THE TRIUMPHANT SUCCESS AT THE FAUNO NOTTE CLUB IN SORRENTO, CROWDED TO THE LAST PLACE, OF THE “A RAGAMUFFIN, A CLOWN” SONG DEDICATED BY THE SORRENTINE WRITER RAFFAELE LAURO TO LUCIO DALLA, IN A SUPERB PERFORMANCE BY FRANCESCA MARESCA, CONCLUDED THE EMOTIONAL AND INTENSE ‘TWO-DAY’ DALLIAN EVENT BETWEEN SORRENTO AND SAN MARTINO VALLE CAUDINA 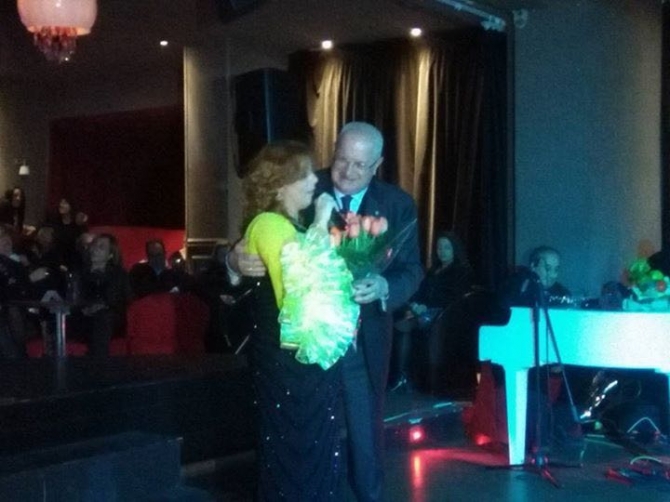 The triumphant success in Sorrento at the Fauno Notte Club of Maurizio Mastellone, crowded to the last place, of the “A ragamuffin, a clown” song (R.Lauro, G. Cardella, P. Della Mora, A. Lucerna), dedicated by the Sorrentine writer Raffaele Lauro to Lucio Dalla, in the superb and passionate performance of Francesca Maresca and with the musical arrangement of Maestro Luigi Belati, concluded the emotional and intense ‘two-day’ Dallian event between Sorrento and San Martino Valle Caudina. In the captivating setting of the “Cabaret Chantant” show masterfully created and directed by Eleonora Di Maio, with the participation of the brilliant Ivan Improta, Maresca sang the most beautiful songs of Dalla, from “L’anno che verrà” to “Caruso”, causing emotions, choirs and a thunderous applause of the audience. In the famous nightclub, where the great artist from Bologna had his début at the age of 21 as the clarinettist of “The Flippers” band, the spiritual presence of Dalla was palpable, and evoked by the beautiful voice of the singer, despite the crowd of photographers and TV operators. The two commemorative days of Friday 3rd March in San Martino Valle Caudina and Saturday, 4th March in Sorrento were inaugurated in the late morning by the formal sittings of the respective municipal councils in town hall chambers for the commemorative ceremony of the twinning between the two towns beloved by Dalla: the blue sea of Sorrento, where he composed his masterpiece, and the green Valle Caudina, where he sang it for the first time in public. The two afternoon conferences on “Lucio Dalla: a man, a poet and a musician” were enriched by the speeches of the Mayor of Sorrento, Giuseppe Cuomo, the Mayor of San Martino valle Caudina, Pasquale Pisano, Assessors for Culture, Maria Teresa De Angelis and Francesco Bello, writer Raffaele Lauro, journalist Gianni Raviele, the chief of the cultural division of TG1, Vincenzo Mollica, the former Mayor of Sorrento, Ferdinando Pinto, and the precious memories of the Sorreninte friends of the singer-songwriter form Bologna: Gianfranco Villa, Angelo Leonelli and Riccardo Scarselli. “I am really proud – highlighted Lauro at the conclusion of the celebrations – as a Sorrentine and as an honorary citizen of San Martino Valle Caudina, to have retrieved and delivered, with an enthusiastic effort of four years, three books, a tour and a documentary in the historical memory of the two communities, a significant part of the ideal heritage of Lucio Dalla consecrated today with the twinning between the two towns and in the promotion of a song dedicated to him.” Now the Sorrentine Peninsula awaits the new song announced by Lauro, dedicated to Sorrento, entitled “Sorrente Nostalgie” (Sorrentine Nostalgias), with the music by Maestro Paolo Scibilia, and which the author of lyrics declared to be destined for performance by Francesca Maresca.