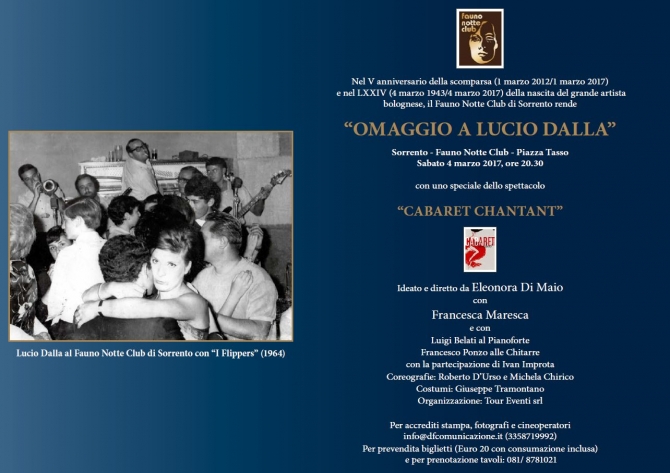 Lucio Dalla returns to Sorrento to the Fauno Notte Club with the dedicated special performance of the “Cabaret Chantant”, held typically on Friday night, ad moved on this exceptional occasion to Saturday, 4th March 2017 to 8:30pm. The tribute of the famous Sorrentine nightclub, opened in 1963 by brothers Franco e Peppino Januzzi, which in 1964 hosted “The Flippers” band with the young clarinettist, Lucio Dalla, concludes the 2017 celebrations on the 5th Anniversary of the passing (1st March 2012/1st March 2017) and the 74th birthday (4th March 1943/4th march 2017) of the great artist from Bologna. The special event was created and will be directed by director Eleonora di Maio for the “Tour Eventi” brand of Maurizio Mastellone. The enchanting voice by Francesca Maresca in the interpretation of the most beautiful songs of Dalla will be the leading thread of the evening. The highlight of the evening will be the first live performance, the national première of the “A ragamuffin, a clown” song (R. Lauro G. Cardella, P. Della Mora, A. Lucerna), dedicated on this occasion by the Sorrenine writer Raffaele Lauro to Lucio Dalla. The song will be performed by Francesca Maresca accompanied on piano by Maestro Luigi Belati and on guitars by Maestro Francesco Ponzo, with the participation of Ivan Improta. Choreography: Roberto D’Urso and Michela Chirico, costumes: Giuseppe Tramontano. “I am honoured – said Eleonora Di Maio – to be able to dedicate a special show to a giant of Italian and world music, Lucio Dalla, who had his début in 1964 at the Fauno Notte Club. It is a celebratory and significant occasion. I am grateful for the usual availability to Maurizio Mastellone and to my friend, Raffaele Lauro, who has entrusted me with the live baptism, the national première of his song dedicated to Lucio. Dalla was an enthusiast of Sorrento and of the Neapolitan song, which he used to blend, as in ‘Caruso’, with his compositions that will brighten this evening of joy and gratitude for him. I invite all Sorrentine fans to participate and honour Lucio Dalla and the extraordinary commitment of the artists.” Media accreditations: info@dfcomunicazione.it (335.8719992). Ticke sales (€20 including a drink) and table reservations: 081/8781021.