Sei qui: Home » News archive » LUCIO DALLA. THE TWINNING BETWEEN SORRENTO AND SAN MARTINO VALLE CAUDINA IN THE MEMORY OF THE GREAT ARTIST FROM BOLOGNA ON THE 5TH[...]

LUCIO DALLA. THE TWINNING BETWEEN SORRENTO AND SAN MARTINO VALLE CAUDINA IN THE MEMORY OF THE GREAT ARTIST FROM BOLOGNA ON THE 5TH ANNIVERSARY OF HIS PASSING. TWO EVENTS ON: “LUCIO DALLA: A MAN, A POET, AND A MUSICIST” 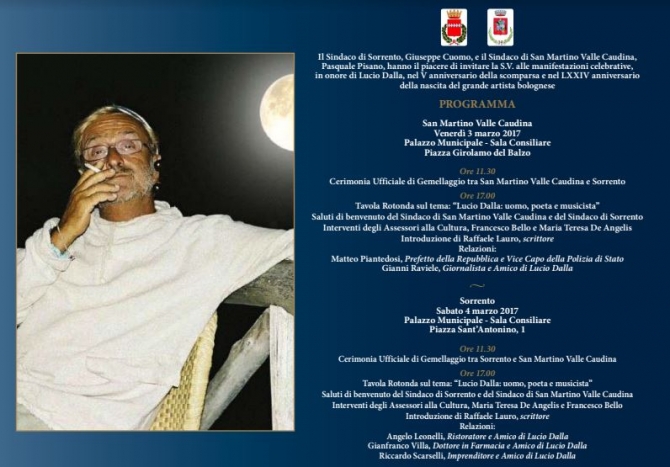 In July-August 1986 in Sorrento, firstly in a suite of the Grand Hôtel Excelsior Vittoria and then in the Grand Hôtel Sorrento Palace, Lucio Dalla composed and refined his masterpiece, “Caruso”. A few days after, on 17th August, invited by the head of the cultural division of Rai’s TG1, Gianni Raviele, the organiser of the important event “San Martino Arte” held in his home town, San Martino Valle Caudina, Dalla sang his masterpiece in public for the first time and received extraordinary popular support. From that day “Caruso” began its triumphant path of success, selling millions of copies of the interpretations by the greatest tenors and the most famous international singers, starting from the famous ones like Luciano Pavarotti, Mercedes Sosa, Céline Dion, Michael Bolton, Lara Fabian, Julio Iglesias and Andrea Bocelli. To consecrate this “ideal bridge” between marine and mountain realities, both beloved and visited by the artist for years, the Municipalities of Sorrento and San Martino Valle Caudina will celebrate on 3rd March in San Martino Valle Caudina and on 4th March in Sorrento, in their respective Town Halls at 11:30, their twinning in the memory of Lucio Dalla on the 5th anniversary of his passing and his 74th birthday. Those events will be followed in the afternoon by two discussions on “Lucio Dalla: a man, a poet and a musician”, with the welcome by the Mayor of Sorrento, Giuseppe Cuomo, and by the Mayor of San Martino Valle Caudina, Pascuale Pisano, and hosted by the Sorrentine writer Raffaele Lauro (www.raffaelelauro.it). Among the speakers in San Martino Valle Caudina: Prefect Matteo Piantedosi, deputy head of the State Police, and the journalist, a friend of Dalla, Gianni Raviele. Among the speakers in Sorrento: three great friends of Dalla, restaurateur Angelo Leonelli, PhD in Pharmacy Gianfranco Villa and tourism entrepreneur Riccardo Scarselli.