Sei qui: Home » News archive » THE CREATIVE UNIVERSE OF LUCIO DALLA REPRESENTS AN INEXHAUSTIBLE MINE OF MODERNITY VALUES STILL TO BE DISCOVERED 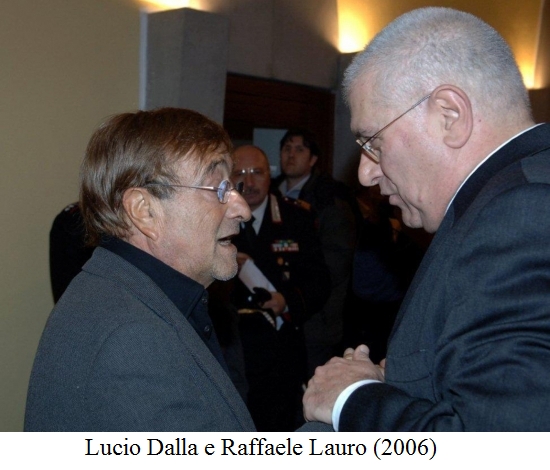 An interview with Raffaele Lauro by Vincenzo Califano

The Dallian adventure of Raffaele Lauro has now lasted for four years and has reached the 5th anniversary of the passing of the great artist (1st March 2012/1st March 2017) in love with Sorrento and the Sorrentines. It has been a long and exceptional, intellectual and first of all human route of the Sorrentine writer (www.raffaelelauro.it). On the eve of the 2017 celebration events (the twinning between Sorrento and San Martino Valle Caudina; two study conferences on the topic of “Lucio Dalla, a man, a poet and a musician”; a tribute-show to Lucio Dalla at the Fauno Notte Club), held between Friday 3rd and Saturday 4th March 2017 in Sorrento and San Martino Valle Caudina, Lauro, the inspirer and protagonist of this adventure, makes an initial assessment.
D.: How was this four-year-long Dallian adventure born? D.: This epic story is unbelievable, considering that you and Dalla didn’t meet a lot. Is it true?
R.: Very true, I met him in person, after 1964, only in 2006. Although Lucio in a dedication made on a picture of us together called me “my friend prefect”, our real friendship has developed, paradoxically, remotely, post-mortem, the most in the last five years, from the day of his passing to date. When, at the ceremony in 2006 of awarding us both with the “Sorrento in the World Award”, he quietly asked me to write a book about him, I did not understand, I didn’t comprehend, nor even imagined to be able to write it, it being light years away from my interests. I understood and comprehended it only after his death. That request was prophetic. A signal. Another lucky intuition of Lucio.
D.: Are you happy, that you read that signal, even though late?
R.: Certainly, because Lucio has given me more than I could give him!
D.: What invite you would like to direct to those who will have the opportunity to read this interview?
R.: Take part in the events in the memory of Dalla, take part in the emotions with Lucio and me on Saturday, 4th March at 8.30pm at the Fauno Notte Club in Sorrento at Piazza Tasso.