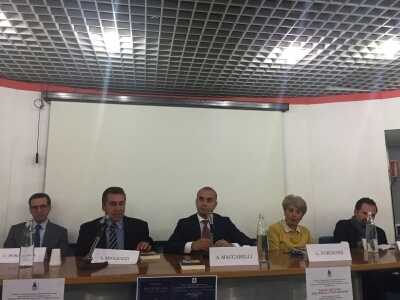 Good afternoon and welcome everyone. I am pleased to begin with telling you a story about what happened to me a few days ago. I received a very polite phone call from a person, who introduced themselves with name and surname. I didn’t know them. “Is this Antonio Migliozzi?” “Yes”, I replied. He thanked me for having joined an event that concerned him. I liked this phone call for its grace, education, subtlety and humility. The first name of the person who called me was (and is) Raffaele, his last name, Lauro. I liked this phone call very much, again, for its grace and humility. Although tonight we meet in person for the first time, he is a person that I know is difficult to find nowadays. With even more pleasure I take part in this great event. Tonight we present the last book of “The Sorrentine Trilogy” by Raffaele Lauro, the title of which is “Dance The Love - A Star in Vico Equense”. I read it greedily. It tells a story of a very courteous woman, a great artist of classical dance and ballet! Let’s come to the point, because I know there is a Naples game and some of us would like to watch at least the second half. I give the floor to Mayor Andrea Maccarelli to introduce the event.

Good evening, everyone! It is a pleasure to see you participate in large numbers in this cultural event of Presenzano. I would like to thank, first of all, our speakers, Giuseppe Bocchino, Professor Forgione, and our host Antonio Migliozzi for their availability. Antonio holds the task of a moderator for the first time, while the Professor and Giuseppe presented the previous work of our friend Raffaele. I also thank director Posabella, who as the president of the educational centre of ENEL offered us the availability of this wonderful hall. Allow me to thank, obviously, our friend Raffaele for wanting to present in Presenzano his third novel of his Sorrentine trilogy. Moreover, he has helped and helps us with the earthquake problem. He is one of the most efficient politicians I know. If we’ve managed to face the emergency rapidly, he is to be thanked for this. Allow me to focus for a moment on the figure of Raffaele Lauro, because he is one of the people whom - and I can really claim it with pride - I’ve had the honour to get to know well. Raffaele, in fact, in a few years ever since I met him, has made me understand the importance of people who apply that principle of our Constitution, which indicates not only the rights but also the duties of citizens. To make oneself available for their country, you can do it in different ways. Raffaele Lauro did it when he was a statesman, and as soon as he quit all public functions he continued to do so in the field of culture. To be able to pass on to others the knowledge, skills and experience is an excellent reason to leave a sign of ones existence. For all that, I thank him hoping that one day he will be interested more closely in the history of Presenzano. I hope you would like to be the coordinator of a publication describing our traditions and our history, with the collaboration of professionals such as Professor Forgione, and all those wishing to make a contribution, especially the young. On our part, from the municipal institution’s point of view, we want to patronize this project morally and economically. Professor Forgione for example has been available for years, and she helps us to great extent also through associations and the members of the Youth Forum. I would like it Raffaele, even if you do it from a distance, if you could support us, hoping that the next book that we present here together has Presenzano as its protagonist. A book written by the citizens of Presenzano for the citizens of Presenzano. Thank you, everyone!

Ciro Posabella, Director of the ENEL Hydroelectric Plant of Presenzano

Good evening. I welcome you on behalf of the company I represent. To be able to host such precious initiatives which enrich a person makes us very pleased. On this occasion I wish to highlight the great collaboration between us and various Communal Administrations which succeeded over the years. Our common goal remains always a goal to open ourselves to the land and to make culture grow also through student visits, which we promote in this important hydroelectric plant. Despite limited availability of personnel we host 20 thousand students per year. We reached 32 thousand in the past. This is in honour to this land, which deserves a lot. Thank you!

Good evening, everyone! I want to talk to you by repeating aloud the thoughts matured while reading this book, which seems to me to be a biography, albeit with a few if no more than a few elements of poetic fantasy. It was already pointed out on the criterion of the Manzonian verisimilitude, I would add, especially for the initial part, how the reconstruction of Violetta’s family environment bears clear reminiscences of the French, English and Russian realistic literature of the nineteenth century, where the narrative of the family origins is used to foretell the character and destiny of a character. That said, I will make three simple considerations, those that I consider the most important. First of all, a brief introduction: I have to say that the choice of a female protagonist already puts me in a favourable state of mind in terms of this work. An author who chooses to tell a story, which has a woman as its protagonist, shows from the start a special sensitivity different from other male colleagues, often obsessed with solving through the construction and the stories of the protagonists of a novel their real and symbolic problems with another male, that is with a male, fatherly figure. A reasoning for men only and, therefore, very boring. It is also a radical choice, since a female perspective on the facts of life is completely different from the most common points of view. From this point of view, taking up what has been said by Professor Louigia Forgione, Violetta’s meeting with Maria Callas is emblematic. The second point I want to make is about the relationship that is created between the idea and the forms of its concrete realization, in our case, the narrative style. I guess the idea behind the book was to describe the realization of an artistic life and make it a hymn to freedom, to the full expression of their vocations, despite the enormous difficulties caused by a historical-political and strongly oppressive context, that suffocated the individual and their, also artistic, aspirations. We are talking, of course, of the Soviet Russia and the Stalinist regime. To give the exact measure of this contrast between the aspiration for freedom and the denial of freedom, the narrative construction of the text had to give the reader, inevitably, more precise references to the historical and cultural context of the time, creating a continuous interweaving between general events and biography. In this regard, my impression is that in the first part of the book the author wanted to prioritize the historical background with respect to the general autobiographical plan, also to emphasize what will be the various dislocations of the protagonist in her escape from the places of oppression to the land of freedom and love. Perhaps he is driven by an intellectual experience that pushes him sometimes to a scholar reference. This explains the presence of a final index of names, places and ballets: the frequency of references has necessitated the creation of a supplement to facilitate the reading. I would say, because our dialogue must always be critical, that in some moments of this initial part I sense a text that develops by looking for a difficult balance because, basically, the historical background aims to interrupt the autobiographical vicissitudes so as to constitute a sort of a brake. Surely, the interruption of Violetta’s events could be a choice for delaying the development of the story and arouse more curiosity in the reader. From my point of view, however, I have often felt the need to learn more about the life of the protagonist without being interrupted by the exterior historical context. If we think of a text as an architecture, which, to be fully successful, or fail, must find a solution to the difficulties that arise during the actual process of writing, the crucial moment of a critical reading is this: to identify where it is has been achieved, or has not been achieved: the effective and creative narrative balance, in our case between the external events and biography. I am convinced that the work is progressing expeditiously and without hesitation, when it has an emotional essence, the emotional fuel. In “Dance The Love - A Star in Vico Equense”, for this reason, I believe that the love story between Violetta and Fernando is the highest emotional moment of the work, because it manages to guarantee a stylistic synthesis, where each element acquires its proper weight in the story, without blurring or extremes. The third notion: in some moments while reading the story of Violetta I thought of Madame Bovary, the eponymous protagonist of Gustave Flaubert’s novel. The final suicide of Emma shows that for the French writer it is impossible to live a life that imitates art, literature, and those chasing this dream are unfortunately destined to a tragic failure. What I think, however, has fascinated the author of “Dance The Love” is the exact opposite: thanks to talent, determination and love, like in case of Violetta, you can have a beautiful life, so much so that the crucial phrase in the book for me is this: “And the love story between Fernando and Violetta was to transform soon into an extraordinary work of art.” Thank you for your attention!