META. THE FEMININE AND EMOTIONAL PEMIÈRE OF “DANCE THE LOVE – A STAR IN VICO EQUENSE” BY RAFFAELE LAURO. MAYOR GIUSEPPE TITO PROPOSES TO GRANT THE HONORARY CITIZENSHIP OF META TO THE SORRENTINE WRITER 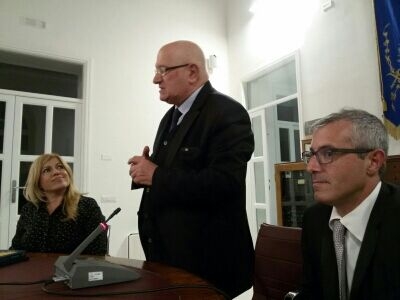 The event in the magnificent and recently restored Council Chamber of the Meta Town Hall, filled to the fullest, concluded the cycle of the Sorrentine Peninsula presentations of the third novel of “The Sorrentine Trilogy” by Raffaele Lauro, “Dance The Love - A Star in Vico Equense”, dedicated to the Russian dancer Violetta Elvin, born Prokhorova. The cultural event organised by the Municipal Administration of Meta generated interest, enthusiasm and excitement in the audience that repeatedly applauded Mayor Giuseppe Tito, Councillor Biancamaria Balzano, the host, the four prominent speakers and finally the author. An applause of homage was addressed also to the novel’s protagonist, Violetta Elvin. Mayor Tito, the new metropolitan councillor of Naples, expressed the greetings of welcome and illustrated the figure of Raffaele Lauro in his roles of teacher, Prefect of the Republic, public servant, politician and writer who has honoured the Sorrentine Peninsula with his most recent narrative works. For these reasons, Tito announced to the applause of the audience, that he was to propose at the next city council the granting of the honorary citizenship of Meta to Lauro. Councillor for Culture Balzano, the perfect organizer and director of the evening, analysed the aesthetic contents of the novel rich in art, beauty and love: especially the love for life, of which Elvin represents a wonderful expression. The famous gastronomical blogger, Angie Cafiero, exalted the recipes present in the novel, with the particular reference to the described “Torta Napoleone”, a cake which accompanied the celebrations after Violetta’s birth in Moscow. Solicitor Maria Costagliola dialectically discussed the reasons for Violetta Elvin’s choice to leave dance at the height of success for family life as a wife and a mother, emphasizing the courage shown by her since her youth, when she was controlled by the secret police of the dictator Stalin: “Violetta Elvin is an example for contemporary women, forced even today to fight for their choices as wives, mothers and professionals.” Solicitor Francesca Attanasio very politely recalled her past relationships in the cultural field, her relationship with the author and, in the field of dance, with Biancamaria Balzano, highlighting how the novel presents historical, political, artistic, psychological, cultural and, in particular, sentimental aspects: “The love of Fernando Savarese for his wife Violetta is an extraordinary tenderness, an exemplary balance between man and woman.” Dancer Carla Coppola, the star of corpse de ballet of the San Carlo Theatre, a pupil of Violetta and of the great choreographer Zarko Prebil, wanted to remember the beauty, elegance, class and the unrivalled sophistication of Elvin: “The Violetta Elvin narrated by Lauro captured, moved and enchanted me me, as she did for the first time when I had the privilege of meeting her at the San Carlo.” The meeting was coordinated with high professionalism by a journalist from “Il Mattino”, Ciriaco Viggiano, with precious summaries of speeches linked together for the swift progress of discussion. Lauro, celebrated by many friends from Meta, Sorrento and Naples present at the event, took the floor to conclude the evening: “I thank Mayor Tito for his generous expressions of appreciation addressed to the already long story of my professional, public and journalistic life, which moved me, and for the unexpected and very welcome proposal of the honorary citizenship, which is a great honour for me. I thank all the participants and, above all, Councillor Balzano, not only for her refined work, but for having selected four fantastic women as speakers. No one better than a woman can deeply grasp the personality of a great artist, such as Violetta Elvin, a courageous woman, a lover of art, beauty, life and freedom.” Among the guests: Honourable Raffaele Russo, Prefect Pasquale Manzo, Councillors of the Sorrentine Peninsula, Director Giuseppe Alessio Nuzzo, Sorrentine entrepreneur Tonino Di Leva, engineers Antonio Pollio and Graziano Maresca, Dr. Giuseppe Pane with Ms. Lucia, State Police Inspector Giuseppe Fornari, employment counsellor Lucia Gargiulo, journalists Vincenzo Califano, Antonino Siniscalchi and Salvatore Iaccarino, lecturers Silvana Apreda and Patrizia Marotta, blogmaster Mauro Siniscalchi, Professor Paulo Pane with hotelier Serena Vinaccia, hotel entrepreneur Paola Savarese Ravenna, architect Antonella Viggiano, Dr. Marco Gargiulo with Ms. Mariolina, Dr. Maria Damiano, Professor Laura Attardi with her husband, illustrious Professor Domenico Vistocco, and the celebrated poet from Meta, Annamaria Gargiulo. The evening was preserved in the images by Maestros Giuseppe Coppola (Peppe 105) and Antonio Fienga (Corso Italia News) (www.raffaelelauro.it).