Sei qui: Home » News archive » AN EMOTIONAL AND CROWDED EVENING IN SANT’AGATA SUI DUE GOLFI, WITH THUNDERING APPLAUSES FOR VIOLETTA ELVIN AND THE REVIEWERS OF [...]

AN EMOTIONAL AND CROWDED EVENING IN SANT’AGATA SUI DUE GOLFI, WITH THUNDERING APPLAUSES FOR VIOLETTA ELVIN AND THE REVIEWERS OF “DANCE THE LOVE - A STAR IN VICO EQUENSE”. RAFFAELE LAURO MAKES AN UNEXPECTED ANNOUNCEMENT OF HIS NEXT NOVEL TO BE PUBLISHED IN 2017, DEDICATED TO THE ENTREPRENEURIAL AND GASTRONOMIC EPOS OF ALFONSO IACCARINO, ENTITLED “SALVATORE DI GIACOMO AND SANT’AGATA SUI DUE GOLFI - DON SALVATORE AND DON ALFONSO” 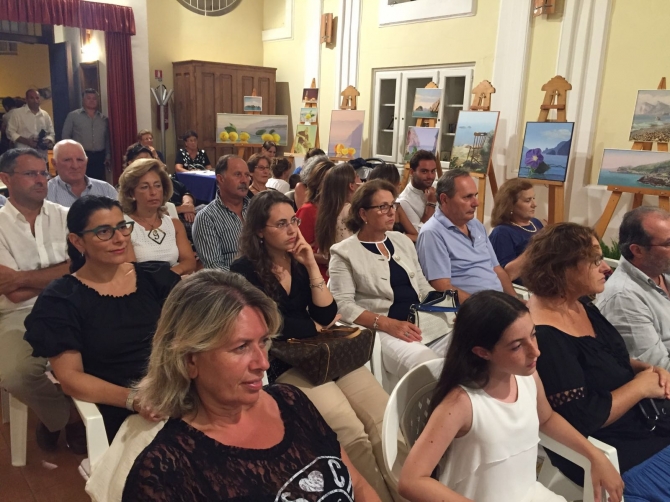 An absolutely exceptional public crowded the hall of the Brotherhood of the Holiest Rosary in Sant’Agata sui Due Golfi to enthusiastically, attentively and with thundering applauses follow the presentation of the third novel of “The Sorrentine Trilogy” by Raffaele Lauro, “Dance The Love - A Star in Vico Equense”. The event was perfectly organised and coordinated by Donato Iaccarino within the 16th Edition of the “Salvatore Di Giacomo 2016” Award. He was pleasantly taken by surprise when the Sorrentine writer, while thanking the administrators, organisers and speakers, announced the publication of his new novel in 2017. It will be dedicated to the entrepreneurial and gastronomic achievement of Alfonso Iaccarino, the grandfather of the multi starred chef, Alfonso Iaccarino, from the “Don Alfonso 1890” restaurant in Sant’Agata sui Due Golfi. The work will be entitled “Salvatore Di Giacomo and Sant’Agata sui Due Golfi - Don Salvatore and Don Alfonso”. The refined introduction by the president of the Pro Loco Iaccarino, the polite greeting of Mayor Lorenzo Balducelli and the delicate female testimony of Giovanna Staiano were followed by the masterly speeches of restaurateur Livia Adario Iaccarino, publicist Richard Piroddi, and President of the Cultural Association “La Fenice” Nicola Di Martino. Iaccarino described the novel by Lauro as another precious gem of his celebratory journey on the Sorrentine Peninsula, not less worthy than previous novels, which, however, opens to the readers “the treasure chest of a human and artistic story of the Russian dancer, Violetta Elvin Prokhorova , unveiling treasures of art, courage, dedication and love”. Piroddi, who gradually followed the writing of the novel, referred repeatedly to the work of Friedrich Nietzsche (“The Gay Science”, “The Twilight of the Idols”, “Thus Spake Zarathustra”) to highlight the amazing vitality of Violetta Elvin, and he pointed out that “as a dancer, philosophically speaking, she has accomplished a Nietzschean revolution of overcoming the oppression of a dictatorial regime and accepting the transvaluation of values with the renunciation of something that she loved, dance, to embrace someone whom she would love even more”. Di Martino amazed everyone with a report of a high academic value, emphasizing the twists of the novel between the universal and local story, defining Lauro as a true master and a “choreographer of writing”: “Dance The Love, the dance of love is the imperative dictated by the mysterious and unknowable Supreme Choreographer through prophet Lauro to Violetta Elvin. Those with visionary eyes and mind determined by the sacred local mythical history see Violetta Elvin flutter lightly, like in the works of Chagal, on the heights of Mount Comune and tiny Siren Islands”. To conclude, the touching lyrical testimony of the poet from Massa, Gianni Terminiello, and the intense reading of the final passage of the novel by Giulio Iaccarino, Prior of the Brotherhood and theatrical actor, which gave the audience moments of genuine emotion. The audience greeted the protagonist of the novel, Violetta Elvin, several times with vigorous standing ovation, who, however, due to extreme heat of the day, was unable to attend the event in Sant’Agata. Journalist Antonino Siniscalchi, poet Annamaria Gargiulo, choreographer Patty Schisa, entrepreneurs Michele Maresca, Giuseppe Stinga and Lello Ravenna, Nadia Di Leva, president of the Association “Friends of the Correale Museum”, labour solicitor Lucia Gargiulo, Marcella Fiorentino Lauro from Lugano, teacher Emilia D'Esposito and telecommunications manager Pasquale D'Antuono were present among the large audience.