SAN MARTINO VALLE CAUDINA. THE THIRTIETH ANNIVERSARY OF LUCIO DALLA’S MASTERPIECE, “CARUSO”. A COMMEMORATIVE PLATE TO BE PLACED IN THE STAGE AREA IN MEMORY OF THE EVENT (17TH AUGUST 1986). WRITER RAFFAELE LAURO PROPOSES A PROVINCIAL MEDIA LIBRARY BASED IN SAN MARTINO, A VISUAL-MUSICAL MUSEUM OF THE LIFE AND WORK OF DALLA 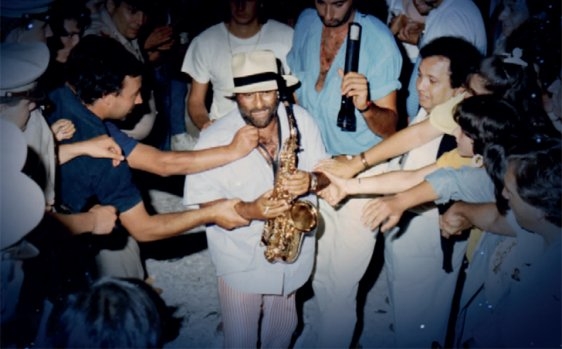 “The celebration of the thirtieth anniversary of Lucio Dalla’s masterpiece, ‘Caruso’, in San Martino Valle Caudina represents an extraordinary and worthy initiative of the Municipal Administration, which however does not express enough the undying gratitude of the Sammartinesi to the great artist from Bologna linked with their village. On the occasion of this happy anniversary, I will ask the administrators to set up an organizing committee to develop a series of not episodic, but established cultural initiatives with the economic competition of the Ministry of Cultural Heritage and Activities and the Region of Campania in order to project into the future of the new generations from San Martino and Valle Caudina this wealth of love and friendship, which must not be lost: a provincial media centre based in San Martino, a visual and musical museum of the life and work of Dalla; an annual research conference on the relationship between Dalla and contemporary Italian culture; and a national award for ‘Poetry for Music’.” With these statements writer Raffaele Lauro praised the initiative of the Municipal Administration of San Martino Valle Caudina to remember the thirtieth anniversary of the world première of Lucio Dalla’s masterpiece, “Caruso” (San Martino Valle Caudina, 17 August 1986 – 17 August 2016), by placing a commemorative plate in the Stage Area of the village, where the event took place. It will also be the occasion of the presentation of the third novel of “The Sorrentine Trilogy”, “Dance The Love - A Star in Vico Equense” by Raffaele Lauro, dedicated to the great Russian ballerina, Violetta Elvin. Apart from being the honorary citizen of Vico Equense, Lauro has published three books about Dalla, such as the last year’s “Lucio Dalla and San Martino Valle Caudina - In the eyes and in the heart”. The book has immortalized the deep bond of the singer from Bologna with the people form Valle Caudina who still remember his extraordinary concerts organized by the Pro Loco of Gianni Raviele in the Stage Area, including, of course, the memorable 17th August 1986. The presentation will take place next Thursday, on 25th August 2016 at 5.30pm at the Council Chamber of the Town Hall of San Martino Valle Caudina in 1 Piazza Girolamo Del Balzo. The welcome speech will be held by Mayor Pasquale Pisano. The debate will be introduced and hosted by Francesco Bello, the Councillor for Tourism and Entertainment. Among the speakers: solicitor Golda Russo and Professor of Literary Subjects Rino Hazan. The event will be concluded by Matteo Piantedosi, the Deputy Head of State Police. Gianni Raviele, former head of the cultural division of TG1, will hold a speech during the event. For information on the works:  www.carusothesong/dallaesanmartinovallecaudina/- www.raffaelelauro.it/dancethelove/