Sei qui: Home » News archive » A SPECTACULAR AND UNREPEATABLE TRIUMPH OF NATURE, ART AND LOVE IN VICO EQUENSE. THE NATIONAL PEMIÈRE OF “DANCE THE LOVE – A S[...]

A SPECTACULAR AND UNREPEATABLE TRIUMPH OF NATURE, ART AND LOVE IN VICO EQUENSE. THE NATIONAL PEMIÈRE OF “DANCE THE LOVE – A STAR IN VICO EQUENSE” BY RAFFAELE LAURO. REPEATED STANDING OVATION FOR VIOLETTA ELVIN, THE STAR OF THE EVENING 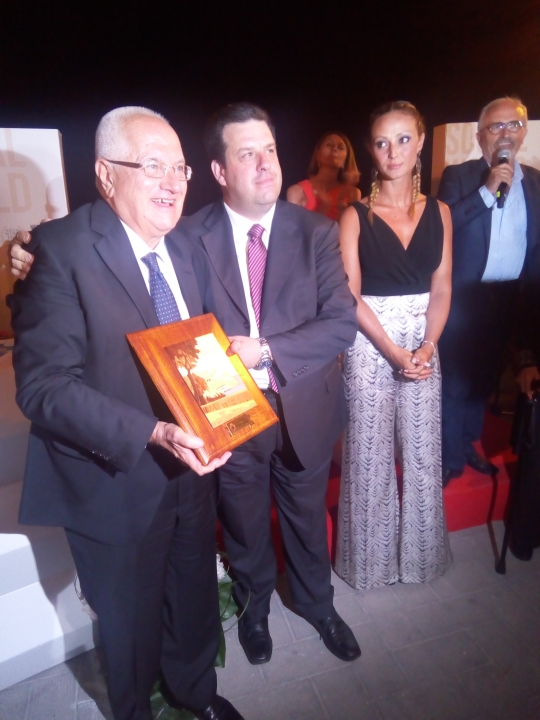 “I could not have wished for a more striking and exciting location in the world, a bigger, educated, participatory and enthusiastic audience, and a more extraordinary and fascinating star of the evening, as well as of the novel, with her beautiful ninety-three years, to baptise in its national première the third narrative moment of my Sorrentine trilogy, the work that concludes my act of love for my homeland, Sorrento and the Sorrento coast.” With these words writer Raffaele Lauro concluded the presentation of his latest novel, “Dance The Love - A Star in Vico Equense”, dedicated to the great Russian dancer, Violetta Elvin, and the natural beauty of Vico Equense, organized by the City of Vico Equense as part of the 6th edition of the Social World Film Festival of Vico Equense, in the square in front of the Church of the Holiest Annunciation, in the incomparable setting of the Bay of Naples at sunset. Mayor Andrea Buonocore, in front of the holiest, civil and religious site for the Vicans, called for silence, such were the strength and power of that location, and thanked the author, the novel protagonist – a citizen of Vico Equense for the past sixty years, the participants, who occupied every available space, even in the church and the surrounding streets, as well as the festival artistic director, Giuseppe Alessio Nuzzo, who had decided to place the event in the billboard of the famous film festival. Nuzzo mentioned that for the second year in a row Lauro honoured the festival with one of his works, and read the opening words of the novel. The debate was governed by journalist Antonino Siniscalchi with his usual consummate skill. He remarked that it will be difficult in the future to condense at a single event in this evocative and enchanted place a world renowned artist, a life for art and for love, and the celebration of this wonderful land of Vico Equense. Professor Salvatore Ferraro retraced the whole human and artistic epic of Violetta Elvin, stating that Lauro's novels are real essays on philosophy, aesthetics, history and art. Ferraro highlighted in particular that it was the father, a man of great intellectual qualities, to instil the love for dance in Violetta. An authentic essay of literary critic of high cultural profile, which involved the audience, was the speech of Professor Angela Barba, an acute connoisseur of all literary works of Lauro, who focused on the female archetype and the saving role that the Sorrentine writer attributes to women for the future of the world. Barba recalled how dance and love are the poles of the novel: dance that generates love and love that generates dance, all punctuated by three places and three times in the life of Violetta: Moscow, London and Vico Equense. Violetta Elvin was greeted from her appearance on stage by repeated standing ovations, which she approached with the look of an undisputed star, without ever betraying emotion, but thanking all those present for the received tribute, starting from the Mayor, Lauro and Nuzzo. To conclude the evening, Mayor Buonocore, presented a plaque dedicated to the artist: “To Violetta Elvin, a shining star of the world of dance and an extraordinary woman, whose decades-long bond with Vico Equense is today celebrated by the whole community in the square in front of the Church of the Holiest Annunciation, with deep admiration and undying gratitude”. Photographers, cameramen, and journalists surrounded the star honoured with her beloved white roses until darkness forced to conclude a meeting, which no one wanted ever to end. The next presentation meetings before heading abroad will be held in San Martino Valle Caudina on 25th August, in Sant'Agata sui Due Golfi on 27th August, in Sorrento on 10th September, and in the first ten days of October, in Piano do Sorrento.