Sei qui: Home » News archive » WRITER RAFFAELE LAURO PARTICIPATES TOMORROW IN NAPLES AT THE ORDER OF JOURNALISTS OF CAMPANIA IN A PRESS CONFERENCE ON SOCIAL WORL[...] 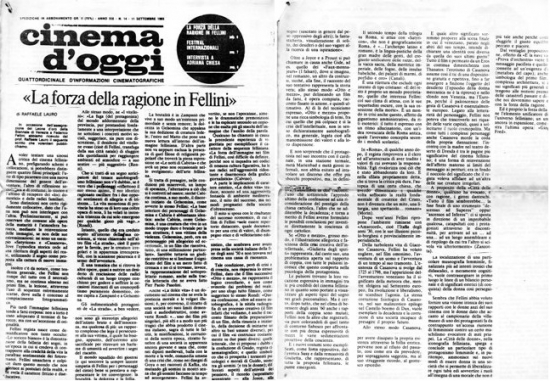 Tomorrow, on Thursday, 30th June, at 11.30 am at the Order of Journalists of Campania in Via Cappella Vecchia 8b in Naples, the Artistic Director of the Social World Film Festival, The International Exhibition of Social Cinema, Giuseppe Alessio Nuzzo, is to present to the press the 6th edition of the festival with the topic of “Dream: desire, hope, passion”. The festival will be held in Vico Equense from 23rd until 31st July 2016. The press conference will be attended by writer Raffaele Lauro, the author of the third novel of „The Sorrentine Trilogy“, “Dance The Love - A Star in Vico Equense”, dedicated to the great Russian dancer, Violetta Elvin. The book will be presented within the festival in its national première in Vico Equense, with an event on Wednesday, 27th July 2016, at 7.30 pm, in the Churchyard of the Church of the Holiest Annunciation. For the enthusiasts of cinema, attached is the article by Lauro on the cinema of Federico Fellini, “The power of reason in Fellini”, published in September 1985 in the cinema news magazine “Cinema d’oggi” on the occasion of awarding the great director in Venice with a Golden Lion for career achievements.