LAURO EXPRESSES TO VIOLETTA ELVIN HIS GREAT AFFECTIONATE COMMOTION FOR THE PASSING OF THE GREAT BALLET DANCER, CHOREOGRAPHER AND MAESTRO, ZARKO PREBIL. PREBIL WILL BE COMMEMORATED BY LAURO ON 27TH JULY IN VICO EQUENSE. 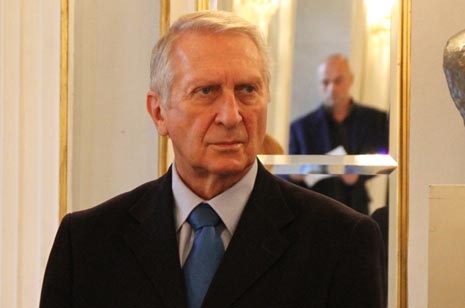 “I've waited for two weeks before publicly expressing my affectionate commotion for Violetta Elvin for the sudden and painful death of the great dancer, choreographer and maestro, Zarko Prebil, a very close friend of our artist since always. One cannot count all the visits Zarko paid Violetta in Vico Equense. They also stayed in constant telephone contact to comment on the news on the world of dance. Prebil, in fact, occupies a very important position next to Donna Violetta in many pages of my new novel, “Dance The Love Dance - A Star in Vico Equense”, which will be presented with the participation of Mayor Andrea Buonocore on 27th July at 7 pm at the national première in Vico Equense, in the square in front of the Church of the Holiest Annunciation. I hoped for the participation of maestro Prebil, to worthily celebrate the extraordinary protagonist of my novel. On that special occasion I will not fail to remember the artistic figure of Prebil, sure to soothe the  sorrow of Donna Violetta for the death of a friend, so dear and so spiritually close to her. Zarko Prebil was born in Split in Croatia in 1934 and studied at the Opera House in Zagreb, where he made his début as a dancer. In 1955, he moved to the State Opera dance company in Belgrade. After finishing his dancing career, he specialized at the Moscow Choreographic Academy, and studied with the great master Nikolai Tarasov, the author of an important treatise on male technique, considered the greatest exponent of the Moscow school of dance.In 1968 he arrived in Italy at the Teatro dell'Opera in Rome for the performance of“Giselle”, with Vladimir Vassiliev and Ekaterina Maximova, which was an acclaimed success. He hadn't left our country since then. He collaborated on many productions of ballets from the 19th century repertoire and brought the classical repertoire of Marius Petipa to the Teatro dell'Opera in Rome and to many other theatres of the peninsula. He has left in mourning many students who achieved success and fame precisely due to his unique guidance.”