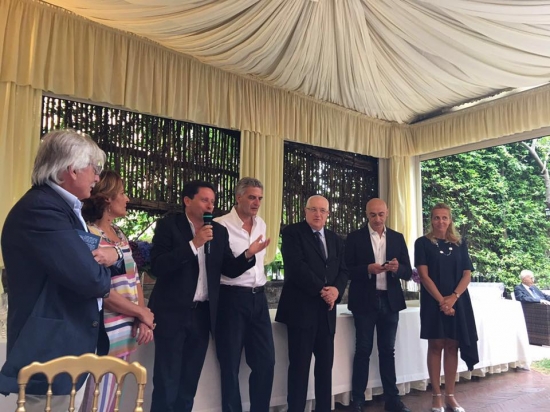 A refined lunch reception in the enchanting Palazzo Marziale in Sorrento concluded the presentation event of the pamphlet by Raffaele Lauro “Palazzo Marziale of Sorrento”, under the careful direction of Paola Savarese Ravenna. The event was honoured by the presence of local authorities, institutional representatives, manages, culture personalities, journalists, bloggers and friends of the landlords, also from Rome and even Argentina. In the welcoming speech, Salvatore and Paola Ravenna wanted to highlight the value of the initiative, which aimed to exalt the quality of the tourist offer in Sorrento. This was followed by the welcome and appreciation of the initiative by the respective municipal administrations, represented by the mayor of Sant’Agnello, Piergiorgio Sagristani, the new mayor of Piano di Sorrento, Vincenzo Iaccarino, and the deputy mayor of Massa Lubrense, Giovanna Staiano. The pre-convivial meeting was hosted by Antonino Pane, former chief editor of “Il Mattino”, who presented a specific proposal to other hotel entrepreneurs of Sorrento and the Sorrentine Peninsula: “This worthwhile initiative cannot remain isolated like a precious flower in the desert, but it has to become the first in a long series, aiming to become a chain of multilingual pamphlets of similar structure in terms of rigorous content and elegant editorial form, on numerous patrician palaces of Sorrento. To allow the guests of Sorrento to take with them at the end of their stay a precious and easy to read pocket document, which outlines the history of those precious residences of ours, made for the art of courtliness.” The final word belonged to Raffaele Lauro, who in his speech recalled the ancient bond of affection that had tied him for decades with the hosts, and highlighted the synergy between culture and tourism, culture and gastronomy: “The culture of an area cannot be confined in a museum or in a library, which although important in their role as custodians of the past, do not cover the spiritual dimension of a special community, such as ours, from anthropological point of view. Even more so, in a land that for centuries has made the art of courtliness its socio-economic speciality, our heritage of identity is also enriched by the relationship with local cultures and the close bond with the quality and variety of food they offer to their guests from around the world.” The sumptuous lunch created and prepared by the young chef, Andrea Napolitano, sealed this memorable Sorrentine feast in a really classy and at the same time understated way, precisely in the style of the house