Sei qui: Home » News archive » THE TRIBUTE TO LUCIO DALLA GIVE TO THE MASSA LUBRENSE AUDIENCE A WONDERFUL, UNFORGETTABLE AND FULL OF INTENSE EMOTIONS EVENING, IN[...]

THE TRIBUTE TO LUCIO DALLA GIVE TO THE MASSA LUBRENSE AUDIENCE A WONDERFUL, UNFORGETTABLE AND FULL OF INTENSE EMOTIONS EVENING, IN A PLOT OF CULTURE, MUSIC, LIGHTS AND IMAGES. IDEALLY DEDICATED TO DALLA THE NINTH BLUE FLAG 2016 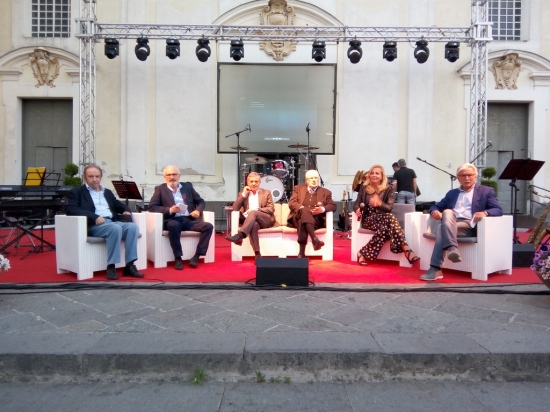 Intense collective emotion went through the audience, in Largo Vescovado, in Massa Lubrense, when massese children, at the conclusion of the evening tribute to Lucio Dalla, organized to perfection by the Town Council, have launched hundreds of balloons in the night sky, shouting “Bye Lucio”. He couldn’t make the debut under the better auspices the summer season 2016 of Massa Lubrense: a wonderful, unforgettable evening, filled with emotion and youth participation. The greeting by the mayor, Lorenzo Balducelli was followed by the cross-interview to writer Raffaele Lauro, author of three books about the singer from Bologna, coordinated, with skill, by Vice Mayor Giovanna Staiano. By acute questions of journalists Antonino Pane, Antonino Siniscalchi and Gennaro Pappalardo, Lauro recalled the bond between Lucio Dalla and the sea and beaches of Massa Lubrense, the beloved places, religious faith, the feeling of friendship and love for others the great singer from Bologna, to which the town council has wanted to ideally dedicate the ninth Blue Flag 2016. An avalanche of applause and repeated standing ovations to the concert of dalliane songs, brilliantly presented by Clara Rolla and masterfully executed, with original arrangements music, by the band DOC, composed by Mario General on sax, Luigi Belati on keyboards, Sergio Sepe on guitar, Pasquale Russo on bass and Lello Imparato on drums. Valuable vocal interpretations of Imma Balduccelli, whose enchanting voice, and worthy of a national audience, has sparked the enthusiasm of those present, especially with “Anna and Marco”, "Stella di mare”, “Felicità”, and, of course, “Caruso”. The concert also enhanced by an effective direction of light and archive images (those amazing seabed of the underwater photography world champions, Enrico and Rosaria Gargiulo), will be replicated over the summer. Unveiled, finally, the song title, forthcoming, dedicated by Raffaele Lauro to Lucio Dalla, and arranged by Maestro Giuliano Cardella: “A beggar, a clown”.
Galleria fotografica di Riccardo Piroddi:
http://www.raffaelelauro.it/fotogallery/70/omaggio-a-lucio-dalla-a-massa-lubrense.html