GRAND OPENING CEREMONY OF THE SUMMER SEASON IN MASSA LUBRENSE ORGANISED BY THE MUNICIPAL ADMINISTRATION IN HONOUR OF LUCIO DALLA, IN LOVE WITH THE SEA IN MASSA – NEXT SATURDAY, 28TH MAY 2016 FROM 8PM IN LARGO VESCOVADO 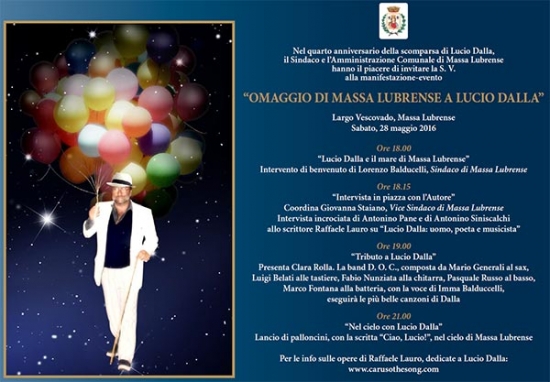 “With this great popular festival in honour of Lucio Dalla our administration opens the summer season of 2016 and celebrates with all the citizens of Massa Lubrense and the Sorrento and Amalfi Coast the great artist from Bologna, certainly happy for the ninth blue flag awarded to our sea, with which he was very much in love. I thank writer Raffaele Lauro for his availability demonstrated as always in terms of our community, and I invite all the citizens, especially the youth and the children, to take part in a musical event about Massa.” With these words the Mayor of Massa Lubrense, Lorenzo Balducelli, announced the programme of the event „A Tribute of Massa Lubrense to Lucio Dalla“, which is to take place on Saturday, 28th May, at 8pm, in Largo Vescovado in Massa Lubrense. The Deputy Mayor, Giovanna Staiano, highlighted: “With great enthusiasm, we decided to pay tribute to the artist who very much loved our land and our sea. The prestigious blue flag is dedicated, ideally, also to Lucio Dalla.” At 8pm, Mayor Balducelli will welcome the guests with the speech “Lucio Dalla and the sea of Massa Lubrense.” It will be followed with the meeting-discussion with the Sorrentine author, Raffaele Lauro, the author of “Caruso The Song - Lucio Dalla and Sorrento”, “Lucio Dalla and San Martino Valle Caudina - In the eyes and in the heart” and “Lucio Dalla and Sorrento Tour - Stages, images and testimonies”, coordinated by Deputy Mayor Staiano. During this discussion journalists Antonino Pane, Antonino Siniscalchi and Gennaro Pappalardo will interview Lauro on „Lucio Dalla: a man, a poet and a musician”. At 9.15pm, a “Tribute to Lucio Dalla”, presented by Clara Rolla, will begin with the performance of the D. O. C. band with Mario Generali on sax, Luigi Belati on keyboard instruments, Sergio Sepe on guitar, Pasquale Russo on bass, Lello Imparato on drums, and with the vocals of Imma Balduccelli. They will perform fifteen of the most beautiful songs of Lucio Dalla. The event will conclude at 11pm with releasing in the air a thousand balloons with “Ciao Lucio” written on them. “Lucio loved the sea all over the world – said Lauro – which he got to know in his early childhood, in Manfredonia, but he loved, above all, the sea of Massa Lubrense, Puolo, Marina della Lobra, Punta San Lorenzo, Punta della Campanella, the Bay of Ieranto, Marina del Cantone, the creek of Recommone and the Crapolla cove, as well as Positano, the Li Galli Islands and the Isle of Capri. Next Saturday, Lucio will be glad to listen to his songs performed by musicians from Massa, while children will be launching balloons with his name in the sky to greet him. I congratulate for this brilliant initiative Mayor Balducelli, Deputy Mayor Staiano and all the City Council. I am proud that this wonderful evening will worthily conclude my 2015/2016 tour on Lucio Dalla and Sorrento”.