Sei qui: Home » News archive » AFTER SORRENTO, THE SOLEMN TRIBUTE TO LUCIO DALLA BY MANFREDONIA. SORRENTO AND MANFREDONIA, THE ONLY CITIESZ TO HAVE REMEMBERED HI[...]

AFTER SORRENTO, THE SOLEMN TRIBUTE TO LUCIO DALLA BY MANFREDONIA. SORRENTO AND MANFREDONIA, THE ONLY CITIESZ TO HAVE REMEMBERED HIM. ON REQUEST OF THE WRITER RAFFAELE LAURO, "THE GREATEST PASTRY CHEF 2014", THE YOUNG PUGLIESE, ANTONIO DALOISO, WILL CREATE "CARUSO", A CAKE DEDICATED TO SORRENTO AND LUCIO DALLA 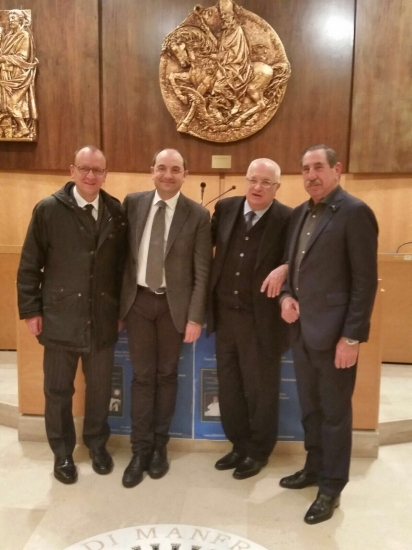 Manfredonia’s tribute to the fellow honorary citizen Lucio Dalla on the fourth anniversary of death of the great artist from Bologna (1st March 2012 - 1st March 2016) was celebrated with great solemnity in the presence of the Prefect of Foggia, Maria Tirone, in the Council Chamber of Palazzo San Domenico. Mayor Angelo Riccardi, journalist Giuseppe Dimiccoli, director Vittorio Tricarico and manager Enzo D’Onofrio recalled their friendships with Dalla, telling completely new stories that received the enthusiastic applause of the audience. Tricarico and D'Onofrio, in particular, the artist's early childhood friends, enriched the ceremony by relating the joyful atmosphere of their group gatherings on the beach and near the castle, fully sharing the interpretations contained in the three books by Raffaele Lauro: “Caruso The Song - Lucio Dalla and Sorrento”, “Lucio Dalla and San Martino Valle Caudina - In the eyes and in the heart” and “Lucio Dalla and Sorrento Tour - Stages, images and testimonies”. In his thank-you speech, which strongly moved the audience and numerous press representatives, Lauro traced the human, poetic and musical profile of Dalla, calling him the “pope”, the builder of bridges between the cities of the South, the communities of the South and the people he met. Many friends of Dalla asked the writer to continue his tour this summer in Apulia, up to the Tremiti Islands. During the Apulian stay, including Barletta and Manfredonia, Lauro, in the heated debate on the social evil of gambling introduced by principals Carmine Gissi and Antonio Diviccaro, met with the students from the “Michele Dell’Aquila” State High Education Institute of San Ferdinando di Puglia and from the “Nicola Garrone” State High Education Institute of Barletta. The latter have shown to the press the preview of a hilarious and intelligent documentary film on the subject, prepared in the laboratories of the Institute, entitled: “Gambling makes you loose your pants”. At the end, the writer paid a visit to the Barletta pastry shop of the most famous Italian young confectioner, Antonio Daloiso, the winner of the 2014 talent show “The greatest of the confectioners”, aired on Rai 2, and gave to the extraordinary, creative and brilliant pastry chef a task to prepare “Caruso”, a new cake ad hoc dedicated to Sorrento and Lucio Dalla, strengthening, thus, the ideal relationship created between Sorrento, San Martino Valle Caudina , Manfredonia, Barletta and the entire Puglia.