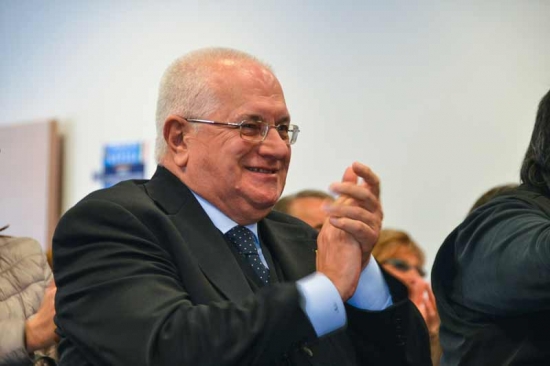 When last Sunday Raffaele Lauro sent it exclusively to me and to his other friends, who had closely followed those two years dedicated Lucio Dalla's relationship with Sorrento and with the South, I was taken by surprise and amazement. After a cold reflection, I became convinced that Lauro could not have concluded his great cultural and regional marketing adventure in a different way, although the lyrics to a song about Dalla had been insistently requested by a musician.

I confess that at the first reading I felt deep emotion, but while re-reading the text several times (an authentic Dallian poem) I recognized Dalla there, and I realized that apart from the emotional impact a system of deep philosophical values is revealed between the lines, a system which represents not only the humanity of the great artist, but his vision of man, of the world and of the transcendence. A very demanding text, not just a common song. After five days I concluded, however, having witnessed it during the filming of the documentary, that there is a strict continuity in Lauro between fiction, storytelling through images and these words intended for music. I do not know who the musician is, or if the song will be successful or not. However, the verses made me involved emotionally, and that's why I consider it a true privilege that the author allowed me to publish exclusively from the beginning not only the final text, but also the comment for the composer of the music.
Thank you, Raffaele, for this gesture of friendship and trust! And good luck with the song!

A RAGAMUFFIN, A CLOWN

– The first one is directed towards the past, dominated by regret and nostalgia, with references to the poetic nature and the centrality of man in the universe, intersected with immanence, that is, the artist's life on earth, which also becomes the “awaiting" of the other time and where the term "nothing" is referred to the mystery of death and life, beyond life;
– The second one is directed towards the future, dominated by hope and immortality of the creative work of Dalla, intersected, with few meaningful words, with the transcendence, in which the artist's meeting with the other life took place, with God, where Dalla keeps on singing, angel among the angels, "on the largest square", and continues to give us from the "terrace of the sky" where the wind blows no more, his words of love: the love for the beauty of nature and the centrality of man, the source of creativity, poetry and music.

The skilful use in the two refrains of the imperfect and the present tense, with the present, however, directed towards the future (the artistic heritage of Dalla will continue to be loved by younger generations) accentuates the two existential moments by completing their meanings with specific references to Dallian songs: the deep sea, the blonde angels, the returning birds, our hopes for what is to come.
Likewise, “non ci bastavi mai” (you were never enough for us) and “non ci basti mai” (you are never enough for us), or “le carezze“ (tenderness) emphasize with repetitions the pain for a creative life broken prematurely, which otherwise would have brought more gifts to people: gifts of poetry, love, beauty, culture and wisdom.
Similarly, the “volevamo” (we wanted) and “vogliamo” (we want) to return to “tua casa” (your home), also highlight two times: where “casa” expresses a metaphor departing from the sentiment of friendship towards the poetic world of Dalla, towards the return to his own “Itaca”, the earthly Itaca and the otherworldly Itaca, the house of the Absolute, the eternal home.
The main references include the following songs of Dalla:
– Com’è profondo il mare
– Se io fossi un angelo
– L’anno che verrà
– Tu non mi basti mai
– Piazza Grande
– Caruso
– Itaca