Sei qui: Home » News archive » AN EXTRAORDINARY SUCCESS OF THE CELEBRATION DAY IN SORRENTO DEDICATED TO LUCIO DALLA ON THE 4TH ANNIVERSARY OF HIS PASSING. APPLAU[...]

AN EXTRAORDINARY SUCCESS OF THE CELEBRATION DAY IN SORRENTO DEDICATED TO LUCIO DALLA ON THE 4TH ANNIVERSARY OF HIS PASSING. APPLAUSES AND INTENSE EMOTIONS 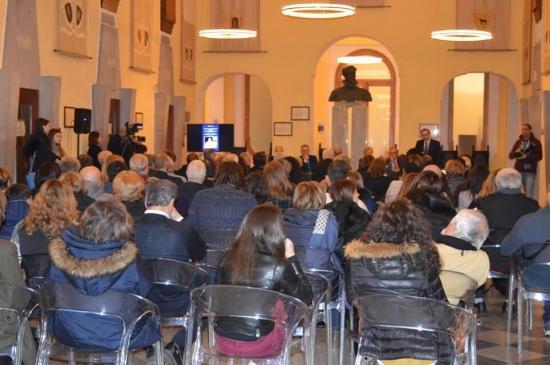 The day of celebration dedicated this year by the Municipality of Sorrento to Lucio Dalla on the fourth anniversary of his death (1 March 2012/1 March 2016) began with the interview held on Rai Uno with the Sorrentine writer Raffaele Lauro. The event was an extraordinary success and demonstrated the positive intuition of Mayor Giuseppe Cuomo, Councillor of Events Mario Gargiulo, and Councillor for Culture Maria Teresa De Angelis. During the morning press conference, Cuomo reaffirmed the gratitude to Raffaele Lauro, who with his three books on Dalla presented in detail the fifty-year-long and also post-mortem bond of friendship of the honorary citizen Dalla with Sorrento, and renewed the feelings of gratitude of the whole community towards the author of “Caruso”, the worldwide anthem of sorrentinity. The speeches of the highest spiritual and cultural level were held at the afternoon presentation in the Town Hall Council Chamber of the travel diary, “Lucio Dalla and Sorrento Tour - Stages, images and testimonies”, in front of a crowd of authority figures, of the Sorrentines and of the admirers of the great artist, who came from Rome, Castellammare di Stabia, Pompei, Naples, and even from Potenza. Particularly significant were the contributions of reflection on the relationship between Dalla and Sorrento, and the rich personality of the singer, by Francesco Alfano, the Archbishop of Castellammare-Sorrento, Mayor Cuomo, Councillor De Angelis, and journalists, Antonino Pane, Antonino Siniscalchi, Antonio Manzo and the dean of journalists from Campania, Ermanno Corsi. Emotions and repeated applause were granted to the young musician, Riccardo Fiodo, a student of the State High School of “Gaetano Salvemini”, who with his sax performed the masterpiece of Dalla, “Caruso”. Lauro concluded the presentation by thanking Mayor Cuomo, the City Council and all the present for the high attendance, and announced the end of his Dallian path with the manifestations of Sorrento, of Manfredonia on 18th March at the initiative of Mayor Angelo Riccardi, and finally, of Massa Lubrense on 28th May 2016, at the initiative of the Municipal Administration. The worthy seal of a wonderful day of celebration, which would have pleased Lucio Dalla, was the concert-tribute to Dalla held by the musical band “The Sputos” from Macerata, which took place later in the evening at the Tasso Theatre in Sorrento. The band conducted by Giuliano Cardella with his perfect orchestrations, accompanied by the powerful voice of Marco Virgili, renewed in the present Sorrentines the emotions of the most beautiful songs of Dalla, starting from his masterpiece, “Caruso”. The aim of the concert was also of a Dallian nature: the charitable support of the diocesan Caritas.