SORRENTO PAYS TRIBUTE TO LUCIO DALLA ON THE FOURTH ANNIVERSARY (MARCH, 1st, 2012/MARCH, 1st, 2016) OF THE DEATH OF ITS HONORARY CITIZEN. IT ENDS AFTER ONE YEAR, THE “LUCIO DALLA AND SORRENTO TOUR” BY RAFFAELE LAURO, STARTED, IN SORRENTO, ON THE FEBRUARY 28TH, 2015. THE PROGRAMME OF MONDAY, FEBRUARY 29th, 2016 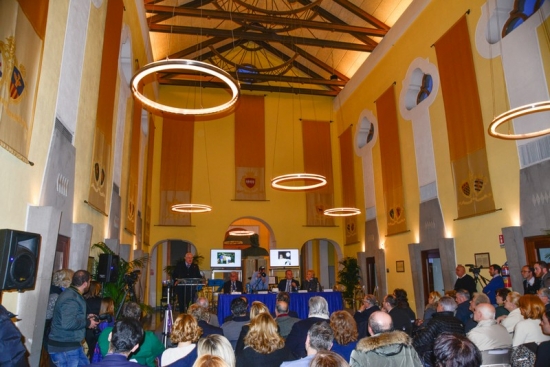 As in previous years, also on the fourth anniversary of his death (March, 1st, 2012/March, 1st, 2016), the Municipality of Sorrento pays tribute to Lucio Dalla, on Monday, February 29, 2016. The mayor, Giuseppe Cuomo, who proposed, by city councilor, in 1997, the granting of honorary citizenship, renews, thus, the imperishable gratitude of Sorrento towards the great Bolognese artist, who has maintained, for almost fifty years, its inner bond, born in 1964, Sorrento, which he characterized as “the true corner of my soul”, bringing with her song-masterpiece, “Caruso”, the name of Sorrento in every part of the world. In addition to the honorary citizenship, in 1997, Dalla was awarded, in 2003, the Prize “Enrico Caruso” and, in 2006, the Prize “Sorrento in the World”. At 11.00, am, at the Town Hall, to illustrate the day of celebration, held a press conference by the mayor, Giuseppe Cuomo, the commissioner to Events, Mario Gargiulo, and the sorrentine writer, Raffaele Lauro, author of the biographical novel, “Caruso The Song - Lucio Dalla and Sorrento”, the novel “Lucio Dalla and San Martino Valle Caudina - In the eyes and heart”, and the documentary film, “Lucio Dalla and Sorrento - Places of the Soul”. At 17.00, in the Council Chamber, it is presented, as a national premiere, by authoritative journalists, the travel notebook by Raffaele Lauro, “Lucio Dalla and Sorrento Tour - Stages, images and testimonies”, published by GoldenGate Edizioni, with a special foreword by Giuseppe Cuomo, illustrating the 21 stages of the Tour, with images and witnessing, as many as 81, totally unprecedented all. It is a precious and unrepeatable document memories and analysis, focused on the binomial between Lucio Dalla-Sorrento, indissoluble, by politicians, diplomats, prefects, mayors (of Sorrento, Manfredonia, Barletta, Matera, San Martino Valle Caudina, Pompeii and Presenzano), assessors, regional councilors, directors, musicians, record companies, designers, journalists, DJs, literary critics, film critics, lawyers, prosecutors, writers, school administrators, teachers, students, sailors, fishermen, hoteliers, restaurateurs and many friends of the singer. Including those of absolute pad, his personal physician, Professor Nicola D’Imperio, chief of gastroenterology at Bologna; his colleague and personal photographer of The Flippers, the musician Romolo Forlai; his confessor, Dominican father, Don Giovanni Bertuzzi, and creative director of the RCA, Francesco Logoluso. Bring greetings from Sorrento and introduce the debate, the mayor Cuomo and the assessors of Culture, Maria Teresa De Angelis. The debate will be moderate by Antonino Pane (Il Mattino) Antonino Siniscalchi (Il Mattino), Rocco Traisci (Metropolis Napoli), Antonio Manzo (Il Mattino) and Ermanno Corsi (RAI) will report. At 18.30, at the Teatro Tasso, the concert, for charity, by the band from Macerata, “The Sputos”, conducted by Giuliano Cardella on guitar, with Matthew Mariani on sax and violin, Paolo Della Mora on bass, Michael Lelli on drums, Alberto Lucerne on keyboards, with Marco Virgili’s voice. Scheduled for two hours, the most beautiful songs by Lucio Dalla.