AT PALAZZO DUCALE OF PRESENZANO THE TRIBUTE TO LUCIO DALLA, PENULTIMATE STAGE OF “LUCIO DALLA E SORRENTO TOUR” IN AN EVENING, FULL OF ENTHUSIASM AND EMOTIONS, BETWEEN FICTION AND POETRY. WAITING FOR THE END OF THE TOUR IN SORRENTO, ON FEBRUARY, 29TH, 2016, ON THE EVE OF THE FOURTH ANNIVERSARY OF THE DEATH OF THE GREAT ARTIST 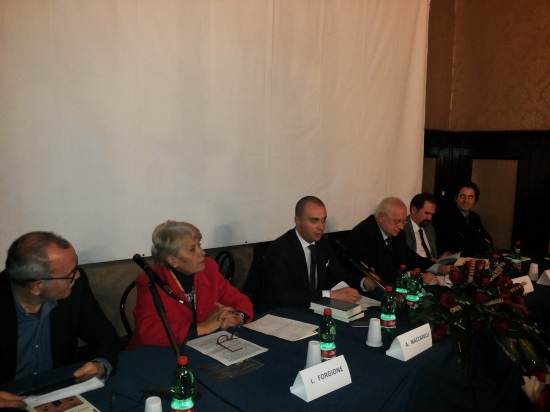 In the Red Room of the Palazzo Ducale of e Presenzano, former home of the Dukes Del Balzo di Presenzano, it was celebrated the tribute to Lucio Dalla, the penultimate stage of “Lucio Dalla and Sorrento Tour”, in a night, including fiction and poetry, enthusiasm and excitement, organized by the Municipality of Presenzano. The brilliant young mayor, Andrea Maccarelli, introduced and coordinated the cultural event and highligthed the pride of presenzanesi in hosting, for the second time, the presentation of Raffaele Lauro’s works: “Professor Lauro honors us, once again, with his presence here in Presenzano. Raffaele Lauro is an example for me. A public man of the institutions, but with an unprecedented artistic and literary sensitivity “. Duke Nicola Gallerani Valeri Caldesi, which, again, has generously opened the Palazzo ducale for the event, thanked too, Lauro, for the renewed presence in the family mansion and recalled how: “Since I was born in Bologna, I met so many times Lucio Dalla, on the street, in Bologna. A simple and communicative man, a great artist, became Italy's heritage”. Professor Luigia Forgione has shown, among thunderous applause, with an articulate and scholarly analysis of literary criticism, the narrative value of the work of Lauro, “Caruso The Song - Lucio Dalla and Sorrento”, and the poetry, between life and death, of the masterpiece “Caruso”: the “Caruso” issue concerns the very role of the artist in society, which, beyond the success and glory, is often found in the desert. That's why, the poetry of the song contrasts the harshness of reality. Lucio Dalla dies at age 69, in a hotel room, in Switzerland. In tragedy, one glimpse of poetry: he left us this and other masterpieces of music and we will always be grateful to him”. The architect Erminio Petecca, managing director of the cultural events of San Martino Valle Caudina, has deepened the dialogue of the second book of Lauro, “Lucio Dalla and San Martino Valle Caudina - In the eyes and hearts”: “Through the three dialogues, content in this precious book, on the relationship between Lucio Dalla and San Martino it Caudina, the author has opened another front of the Bolognese artist’s life and his relationship with the common people. The one with San Marino, also lasted for decades. In San Martino, Lucio was one of us”. From fiction to poetry, poetry of Lucio Dalla to that of Giuseppe Bocchino, journalist and poet from Presenzano, author of the collection “Versi fuori corso”, edited by Giuseppe Vozza Editore. It just touched the Sorrentine writer, in an intervention compared between the Bolognese artist's poetic world and that of Caserta poet, emphasize that: “Poetry can be generous and wild, along the arteries visible pages, where the verses recline. It becomes a sonorous band, interwoven with words that take shape as it materializes in the masterpieces of Lucio Dalla. The poetic language of Bocchino, sought after, but always musical, with variegated sonorities, utterly original, as in Dalla’s scat jazz, feeding, above all, color and light. This feeling of mutability is the most significant feature of his ‘modus poetandi’, which brings him closer to Lucio Dalla”. Among the personalities, Lucia Ranucci, Provincial Entity responsible for Tourism of Caserta. Now the wait is moved to the closing day of the “Lucio Dalla and Sorrento Tour”, which will be held in Sorrento, Monday, February 29th, 2016, whence he started February 28th, 2015, as part of events organized by the Town Council Sorrento, to celebrate the fourth anniversary of the disappearance of Lucio Dalla (March, 1st, 2012/March, 1st, 2016). The Tuor dalliano has racked up 21 stages, in Italy and abroad, and 84 speeches of politicians, diplomats, community leaders, journalists, television and print media, managers, teachers, students and personal friends of Lucio Dalla, who explored and celebrated the inner bond, which lasted nearly fifty years, between Sorrento and Dalla.