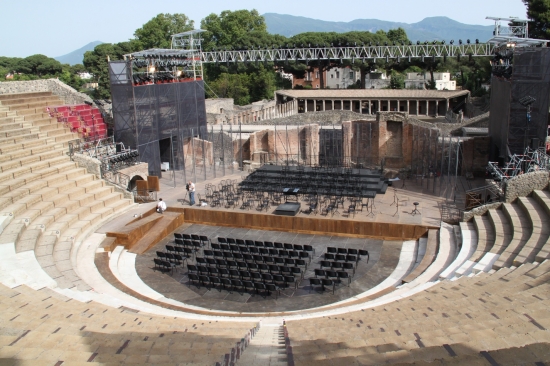 The spiritual bond between Lucio Dalla and Pompeii was created in 1971, on the occasion of the famous Pink Floyd concert recorded live in the Grand Theatre, which was then made into the album of “Live at Pompeii”. It was renewed in August 2005, with the biggest concert of the singer from Bologna, held in the same Grand Theatre. The municipal administration of Pompeii pays tribute to this historical bond with a cultural event to be held on Friday, 11th December 2015, at 4.30pm, at the Council Chamber of Town Hall, in Piazza Bartolo Longo 36. The event will be opened with the presentation of the biographical novel by Raffaele Lauro, “Caruso The Song - Lucio Dalla and Sorrento”. Margherita Beatrice, the Councillor for General Affairs of the City of Pompeii, will introduce and host the event. Mayor of Pompeii, Ferdinando Uliano, will welcome the guests. This is to be followed by a speech by attorney Arturo Sorrentino, and concluded by journalist Rocco Traisci.

The speeches will be followed by the screening of the documentary film by Raffaele Lauro, “Lucio Dalla and Sorrento - Places of the Soul” (54’, with English subtitles). “On the evening after the concert of Pompeii – said Lauro – Dalla confessed to his friends, who had followed him to the concert, his concept of music. Music, if it is real music, if it has value, if it communicates and involves, is always classical. Therefore, all music with solid roots is classical. I know that the purists, the sacred vestals of the so-called classical music, will tear their clothes apart and cry out for a scandal for my desecration. But I proceed on my road, in my musical research, because you have to play with music the way you play with life.”