Sei qui: Home » News archive » MOLFETTA, LIKE THE REST OF APULIA, PAYS TRIBUTE TO THE NEW SUCCESS OF THE BOOK AND THE DOCUMENTARY BY RAFFAELE LAURO, DEDICATED TO[...]

MOLFETTA, LIKE THE REST OF APULIA, PAYS TRIBUTE TO THE NEW SUCCESS OF THE BOOK AND THE DOCUMENTARY BY RAFFAELE LAURO, DEDICATED TO THE BOND OF LUCIO DALLA WITH SORRENTO. LAURO: “THE REVOLUTION OF SWEAR WORDS IN SONG LYRICS, A CLEAR PROPHECY OF LUCIO” 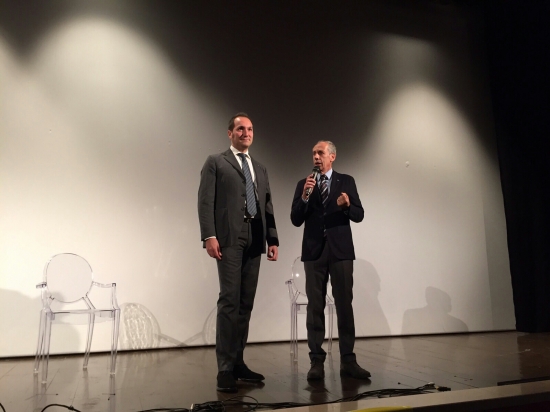 Although the very inclement weather dominated the evening with a deluge of rain, the Apulian lovers of the great artist from Bologna, arrived even from Bari, gathered in the cosy hall of the Citadel of Artists of Molfetta to attend the event, “Molfetta's Tribute to Lucio Dalla”, organized by the local Rotary Club as part of the initiatives of solidarity by the Rotary Foundation. The absolute highlight of the evening was a documentary by Raffaele Lauro, “Lucio Dalla and Sorrento - Places of the Soul”, presented on a large cinematic screen. Magnificent images along with the emotionally powerful soundtrack involved and visibly moved the crowd of members of the Rotary Club. Recurring applause was followed by the final ovation for the Sorrentine writer-director, who was literally besieged at the end of the event by the former visitors of Sorrento and by those, who hoped to visit the Sorrentine coast soon. Before that, under the shrewd direction of the renowned advocate of the Court of Trani, Maurizio Altomare, the President of Rotary Molfetta, Enzo Galantino, wanted to emphasize the pride of the club for organizing the charitable tribute to Lucio Dalla, whose generosity was well known in Molfetta, where in 2011 he held a celebrated concert in favour of the Italian League Against Cancer. The presentation of the biographical novel, “Caruso The Song - Lucio Dalla and Sorrento”, was opened by music critic and journalist of Radio Norba, Antonio Malerba, closely followed not only in Apulia, but in all regions of the South: “I read the book by Lauro in one breath. Despite the bulk of five hundred pages I didn't get bored even for a moment. The work contains a rich narrative distillate of love for music and pure beauty, which for the first time reveals the natural, cultural and psychological roots of the poetics of Dalla. I plan to read it again and I will speak about it tomorrow during the broadcast.” Moreover, with his breezy radio eloquence, Malerba enchanted the audience with a fresh and refined analysis of many of Dalla's songs, defining the artist's entire production, including the less famous works (among others he mentioned also “Disperato Erotico Stomp” of 1977, and the scandalous “Merdman” from the album of “Henna” of 1993), the soundtrack of our youth. As an example, he mentioned how his mother, at the age of 87, used to sing “4 marzo 1943” every morning. She received a single of this song as a gift from her husband as soon as it was released. The journalist didn't miss the wonderful opportunity to call the Sorrentine writer onto the stage and to interview him in front of the audience on the swear words present in the lyrics of Dalla, on the Dallian tour of 2015 in Italy and abroad, and on the inspiration for his new novel, “Lucio Dalla and San Martino Valle Caudina - In the eyes and in the heart”, published last week, to be presented officially during its national première on 18th December 2015 in the Town Hall of San Martino Valle Caudina. “There are more than fifty – said Lauro – of the so-called swear words present in the songs of Lucio, which despite the different opinion of the left-wing critics of the time, are not vulgar when read in the correct context: from asshole to shit, from glandis to twat, from queer to whore, up to masturbation. Anyone can see today, watching afternoon entertainment TV broadcasts, how many Martians and how many Merdmen are its protagonists and are applauded. Lucio was, therefore, not only the poet of ‘Caruso’, but also a polished and prophetic predictor of this cultural homologation and of this decadence of values, which threaten the young.”